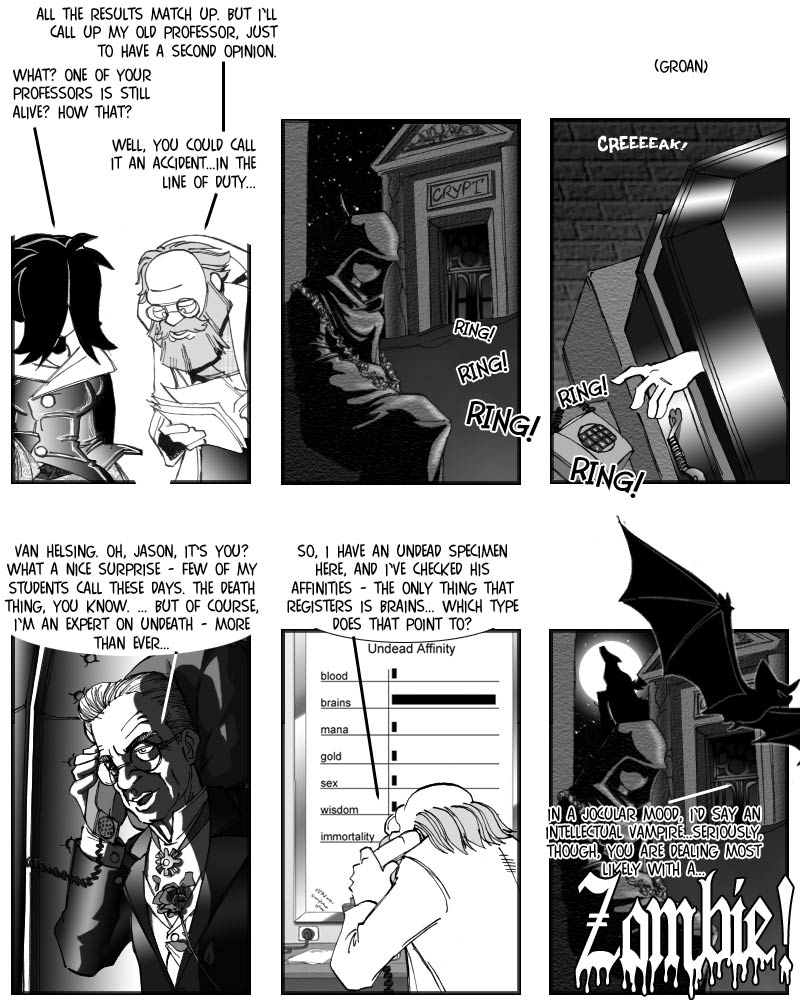 The cat’s out of the bag, so to speak – Gregory Elminster, whom we saw (actually heard) getting killed in the first episode of the chapter, and who later returned as a partially (if tastefully) decomposed, brain-craving corpse is, in fact, a zombie. Yeah, I know that that’s hardly a plot twist, but at least I didn’t give it all away in the title with the very first episode.

As you can see in panel five, the Professor conducted a lot more different tests than I’ve actually shown. I limited myself to those that were actually pointing into the right direction – most of the others were just boring, and the tests regarding Gregory’s affinity to sex were simply unsuitable for publication.

In an A-movie, Professor Dr. might just have looked at his notes and said something like: “That kid really likes brains – he must be a zombie.” For a B-movie, however, more is more better – so the Professor has to call up Dr. van Helsing in his coffin in some eerie crypt, just so that he can offer the same revelation (which doesn’t come as much of a revelation to anybody) in a super-sized, drippy font with the children of the night cajoling around. And you can consider yourself lucky my webcomic doesn’t support a soundtrack.

As originally scripted, Professor Dr. would have called up a friend, just a nephew of the original van Helsing (he’s got quite a few descendants in fiction). Then I realized, however, that Professor Dr. is actually old enough to have met him, or even have been his student. And, given how van Helsing’s unusual hobbies put him at a considerable risk to suffer a vampire bite or two, it’s not that much of a stretch to actually have him still be around, himself. He’ll be back for the third chapter, as well.