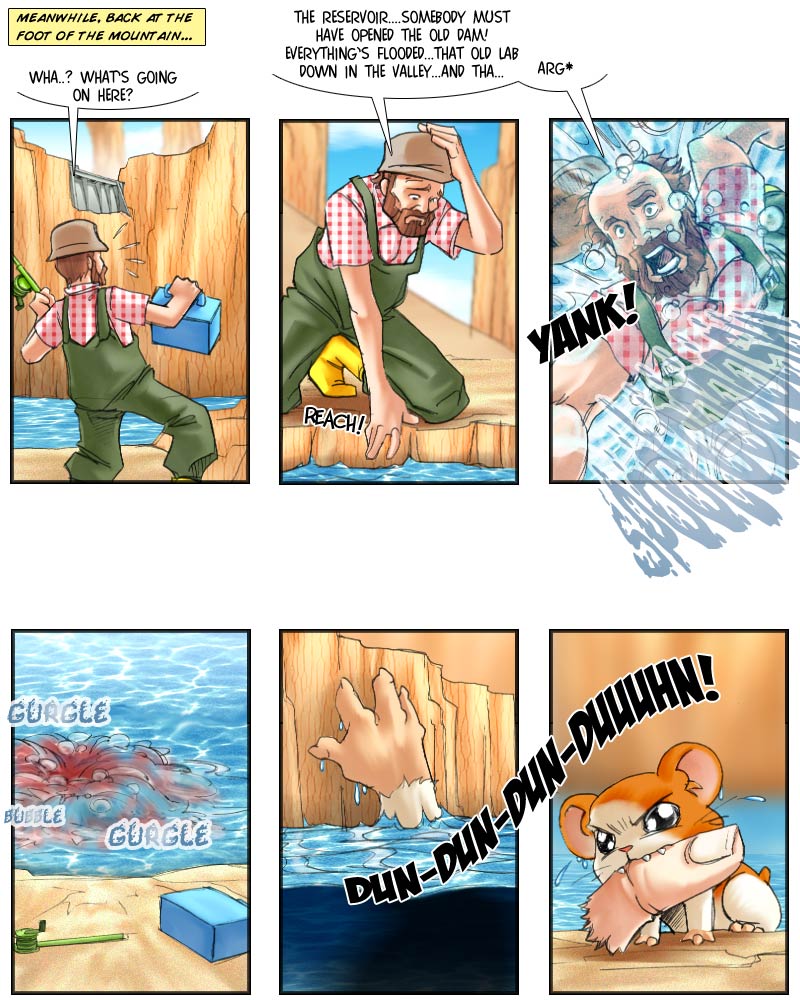 And thus, by popular demand, that one cute hamster that has no name and had that itty-bitty part in that single strip is shown to have survived. ._.

Yes, out of the dozens of characters that have died in this chapter, including some of the main characters, and the hundreds or thousands of characters that can be assumed to have kicked the bucket off-screen, that little hamster is the only one to whose lethal fate objections were raised. For Snuka, whichever form of afterlife he’s currently experiencing, it must come as a great relief (and probably his only one) that his death might have been tragically untimely and rather savage, but at least it didn’t cause any distress to anybody – or at least not as much as the death of a hamster would have. =P

Of course another minor character had to buy the farm to allow the hamster to escape, but, hey – he wasn’t a cute and fuzzy rodent, so I’m sure nobody will mind. And yes, it was a necessary sacrifice. There are certain standards, in B-movies, regarding the escape of lab animals from a gene-engineering lab – it can’t be done without a bodycount of one or higher. But that minor character – let’s call him Uncle Pete, for I’m sure even giving him a name won’t cause people to care half as much for him as for a hamster – was a goner, anyway. He was going fishing, you see, and in B-movies people who go fishing always die. In real life, I’d assume it’d be a comparatively safe hobby, especially around an inland river reservoir – but in B-movies, fishing serves only one purpose: it conveys a sense of peace and serenity. And peace and serenity serves only one purpose in turn: to be shattered. That’s why a movie monster’s first victim will never be someone who’s bungee jumping or paragliding.

At least there wasn’t any plausibility issue with the hamster’s escape – after all, the Professor did genetic experiments in that lab, so it’s a reasonable assumption that that little critter comes with a little bit ‘extra’. Originally, the Prof. wanted to go for a cross between a hamster and a piranha, to create the ultimate amphibious pet – but another scientist had already done that, so he crossed his hamsters (which are, specifically, Siberian Filigree Hamsters) with Dunkleosteus genes*. And just when you thought it was safe to go back in the water… And, as you can see from panel five, there’s another augmentation: opposable thumbs. Never gene-engineer a monster without those. Natural weapons are fine and dandy, but nothing beats a creature** that has a ten-ton bite and can operate a machine gun. Still no reason to cancel your vacation to Florida – there is a chance, after all, that that hamster is not going to find a mating partner, and if it does, it might not pass his genetic modification on to all of his offspring…so those changes might not get fixated in the worldwide hamster population and forever shift the balance of species dominance on this planet…might not…but if that happens… …if that happens… …well, it wasn’t me who wanted that hamster to survive. =P

Which reminds me, it needs a name, now that it’s a recurring character… Hmm, how about “Jaws-taro”?

And don’t worry – despite the hamster’s unplanned escape, the Professor still has just about enough juice for his device. There’s, like, a battery in-between there somewhere, and the hamsterwheel has charged it sufficiently before Jaws-taro made a break for it. Right. >_>

*Which he had from a Dunkleosteus specimen encased in amber…uh, aquatic amber. Or perhaps the Dunkleosteus was on vacation on land. ._.

On a different note, Maria & Michelle, of Shonen-ai Kudasai, have informed me of a worthy cause connected to George’s favourite toy, the Tesla Coil. I’ll reproduce, as well as endorse (for what that’s worth), their forum post in full: “Wardenclyffe, Tesla’s only remaining lab, is being sold. The Tesla Science Center is attempting to raise funds in order to buy it and turn it into a museum. If you are like George, and you love Tesla and his super-awesome coils, please donate! <3 <3

Save the Tesla Coils!”

If you can afford, please consider making a donation to help preserve and popularize the history of science and technology.