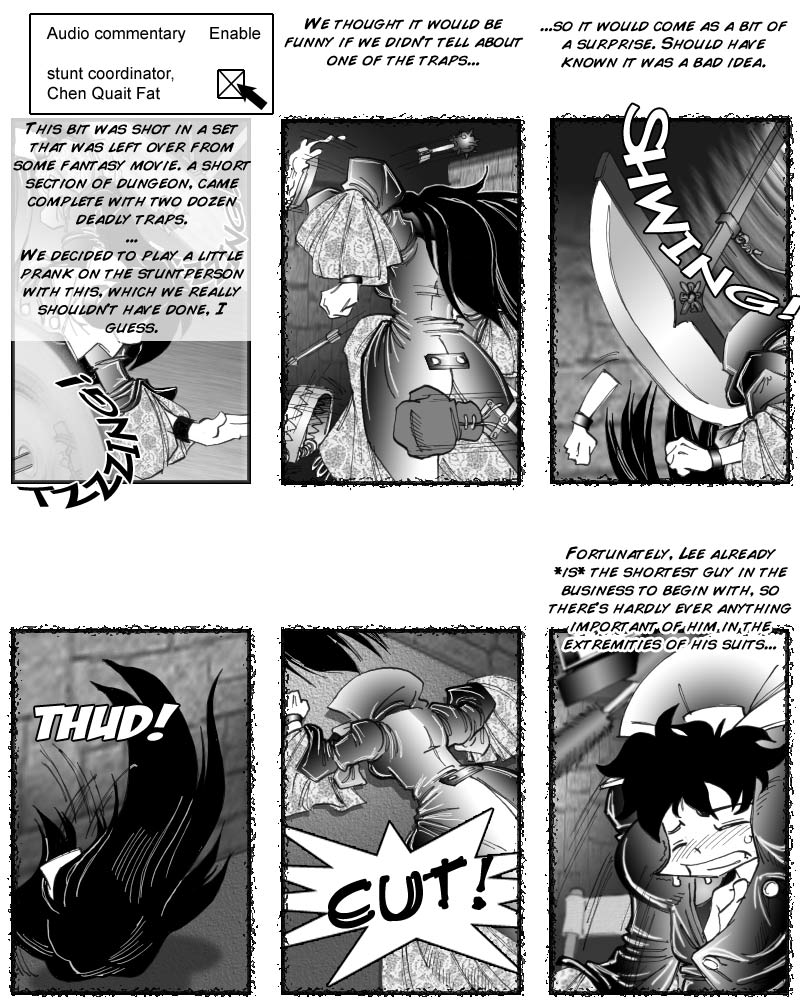 Well, like many people already suspected, Monday’s update was only an April’s Fool Joke. Quite obvious actually, wasn’t it, given how Snuka spent most of the episode making April’s fool out of himself? =P

Unfortunately, this means no hot, kick-ass girlfriend for Snuka, and it’s back to the usual dangers and indignities of his actor/stuntman/victim career for Lee. Thusly, this episode ties in directly with last Thursday’s. While his petite physique certainly serves Lee quite well when it comes to surviving the various assaults of his obviously merciless destiny, he would, in reality, hardly qualify as the shortest guy in the business. There are quite a few short statured stunt performers, actually, the most famous of whose is probably Martin Klebba.

Ingenious traps often figure prominently in fantasy scenarios, and, for some reason, set and production designers seem to feel that a fantasy setting gives them license to come up with mechanisms that would be ludicrously complicated and difficult to construct with the limited means available to the ‘primitive’ societies often supposed to have constructed them. Add to that how absurdly ineffective and inherently flawed most of these fancy devices are, in relation to their complexity, and you end up with something that seems oddly out of place in a pre-modern society – generally, that kind of wasted effort can only be found in ‘advanced’ societies with a regular civil service branch. Yes, I would venture that a culture needs to develop the concept of ‘committee’ before it can invest twice or thrice the effort it would take to construct a completely inescapable death trap into a much more complicated trap that can be easily disabled/side-stepped.

Anyway, that’s it for today, a new voting incentive is up, more next Monday.