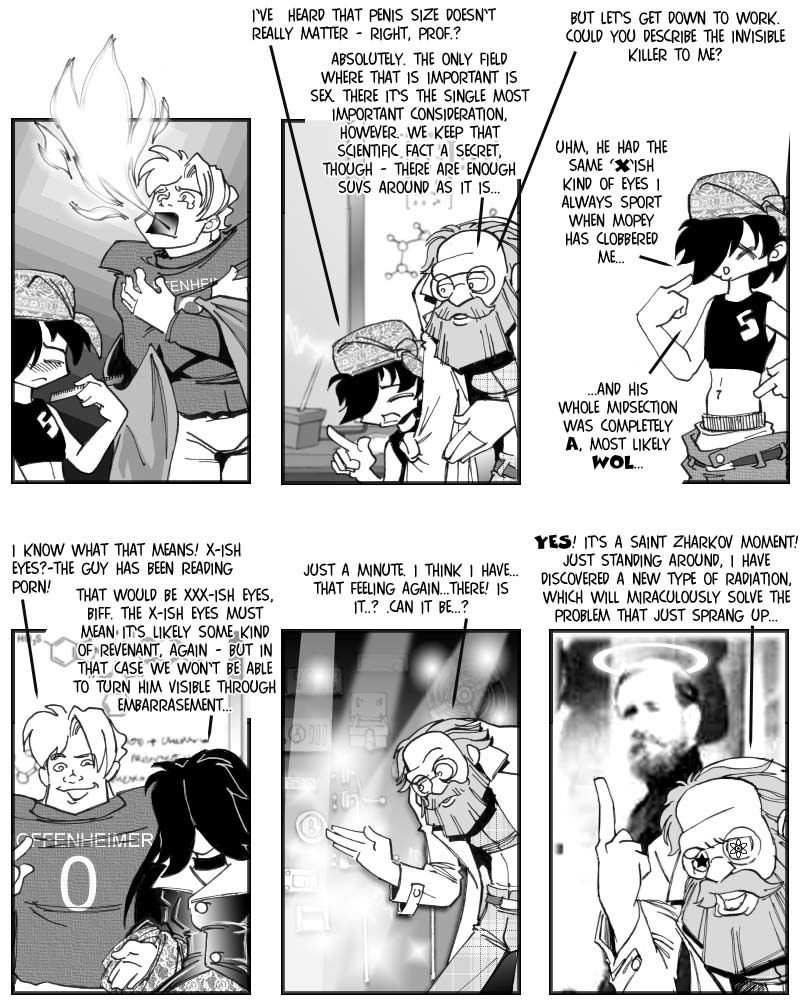 Saint (Dr.) Hans (occasionally Alexej) Zharkov is the patron saint of B-movie science. Radiation was his drug of choice, since it was the miracle science of the 30ies and 40ies – but while Dr. Frankenstein needed years of research to find out he could reanimate dead bodies with ultraviolet light, Dr. Zharkov kept the new types of radiation coming hard and fast.

If a deus ex machina was required (usually at the start of every. single. friggin’. episode.), it was enough to drop the doctor off in some lab somewhere, and he’d return with some miracle ray, perfectly suited to the crisis at hand, within ten minutes, tops. OK, let’s see how many counts of ‘willing suspension of disbelieve’ we require here: Zharkov needs to immediately find his way around a lab, which he had never seen before and which was constructed by an alien civilization. Figuring out all the equipment intuitively and instantly, he immediately puts it to work towards some ground-breaking research, even if he actually just stepped into the lab to hide from the raging civil war outside. He gets solid results within a couple of minutes, and soon is delighted to find out that his new type of radiation is just *the* thing to get them all out of a crisis he wasn’t even aware of. Five minutes after he has discovered the new radiation, he is already able to produce and control it at will, and applies it practically for the first time in a stunning feat of unheard scientific marvel. Woah. Makes you wonder what Zharkov *could* have achieved if they just had let him work in peace in his well-equipped laboratory on Earth – every day, there had been a new list on the blackboard: ‘Revolutionary, new types of radiation discovered yesterday, with applications…’.

The Universal serial offers a few, short, tantalizing glimpses at Zharkov’s modus operandi: His particular brand of scientific research mostly involves staring with serious mien at a variety of flashing gizmos – occasionally turning a dial to make the gizmos flash faster or slower. Unfortunately, the camera always cuts away before we see the actual discovery of a new type of radiation take place, so we’re left to wonder. We have one clue, however, indicating that much of his research centers on ultraviolet light: he used exactly the same gizmos as Dr. Frankenstein. No, not just the same kind, actually the same gizmos – the same props were used for the Flash Gordon serial and the Frankenstein movies.

Dr. Zharkov was a real trend-setter, as far as B-movie scientisting is concerned. Fortunately though, his particular sense of fashion did *not* inspire too many of his successors – his usual outfit involved black leather boots, tight black shorts (he didn’t shave his legs), a studded leather belt and a long-sleeved, turtlenecked black shirt with a bright floral design on the front. Occasionally, he wore a black cape, as well. A new voting incentive goes up today, dealing with some website I stumbled upon. Apparently, they try to help children cope with the inevitability of their fates – I commend that. More on Thursday.