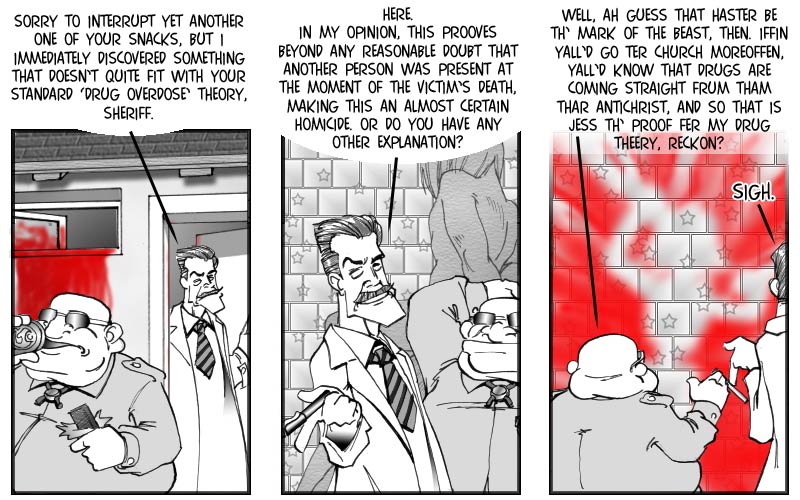 Seems Sheriff Ketchum has a firm grip on theology, at least. Isn’t he just getting cuter and more likable every time we see him? Of course, there’s heated theological controversy surrounding the question what ‘the mark of the beast’ would really look like – for science, the answer is easier: On average, the mark of a beast is a little puddle of piss at the foot of a lightpole.

Seriously though, in the Middle Ages, murders that were especially gruesome were often attributed to the agency of Satan, and no investigation of potential human culprits was undertaken. Well, save for the obligatory slaying of a couple of Jews for good measure, that is… So you could say Sheriff Ketchum law enforcement principles are only outdated by six centuries or so, and that’s hardly any time at all, compared to the age of the universe, now is it?

The silhouette on the wall is , however, genuine – the first actual hint to the identity of our serial killer. And, as befits a B-movie, the first hint is completely useless to the audience, except with some hindsight from later in the plot. However, you will be surprised to see how much insight the Professor will be able to extract from this later…*snerk*

No one ever got ‘the voting incentive that couldn’t be got’. Actually, I should have been able to predict that from the name…Anyway, the new voting incentive going up today is completely non-cryptic. I think I’ve made a long enough break in Harry Potter-themed voting incentives, and I just got GOF on DVD, so there you go.

On Thursday, it’s time for the Easter special I already announced a couple of months ago, the second part of the Christmas special…