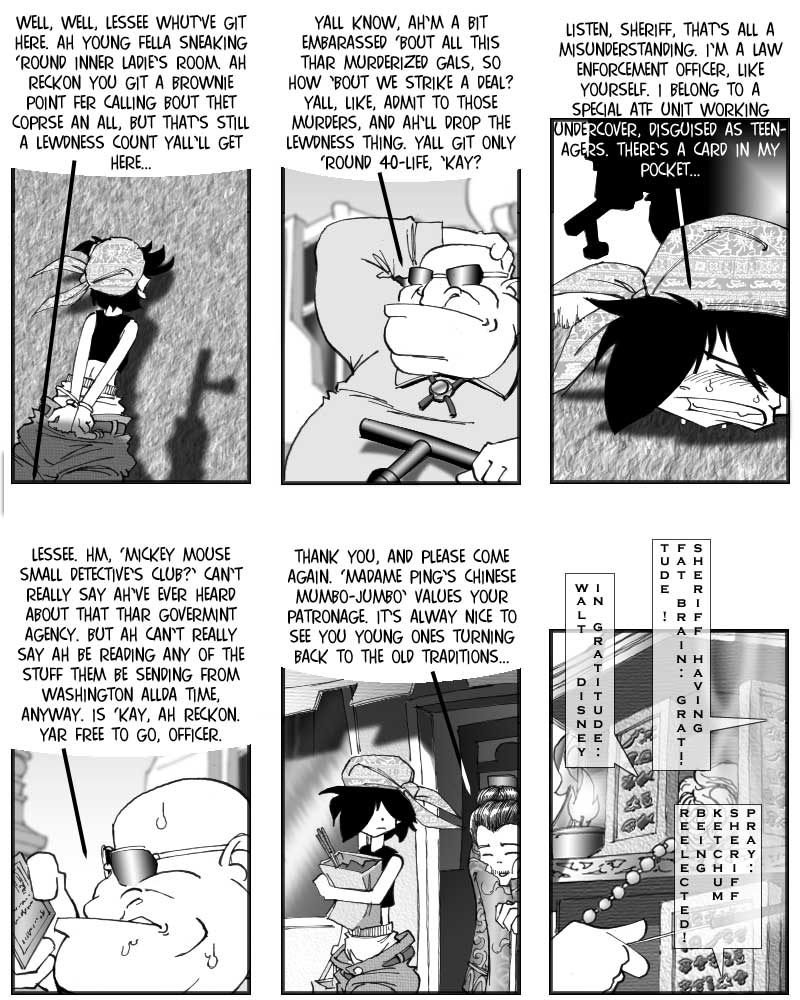 Sheriff Ketchum is a firm believer in law enforcement efficiency. I his opinion, law enforcement works best if you just arrest whoever is closest to the crime scene when you get there. That way, you have the minimum amount of time to spend outside of an air-conditioned enviroment. OK, the real culprit might get away…but chances are he’ll happen to pass by another crime scene, and get arrested there. And the person you end up arresting might happen to have committed another crime elsewhere. Like leaving the seat up or something similarly heinous. Statistically, it all evens out.

Please imagine the signs on those tablets in the last panel to be Chinese. I never bothered to enable Chinese language support on my computer – after all, even if I enable my programs to display Chinese correctly, I would still not be able to read any of it.

The Sheriff might have some deficiencies in the mental department, but you’ll have to cut him some slack, as well… it IS hard to keep up with all the new agencies. If he had kept himself informed, he’d know that the ‘Mickey Mouse Small Detective’s Club’ has been renamed in the meantime…I can’t quite remember the new name…’Bureau of Fatherland Safety’ or something like that…hasn’t changed much in any other regard.

Naturally, the ATF does not really employ kid agents. In fact, they have trouble finding agents which look young enough to pass for college students when they work undercover.

Since Snuka has had his close-up on Monday, the Sheriff wanted one, as well. You be the judge…I won’t say a word…

Up to now, no getters for the ‘voting incentive that wouldn’t be got’. This is your last chance, as it will be replaced on Monday, when the strip will feature the first real clue to the identity of the serial killer. Always wear your seatbelt and use your turn signal.

Text: Current predictions regarding the year by which every non-convict in America will work in law-enforcement average out to 2017.