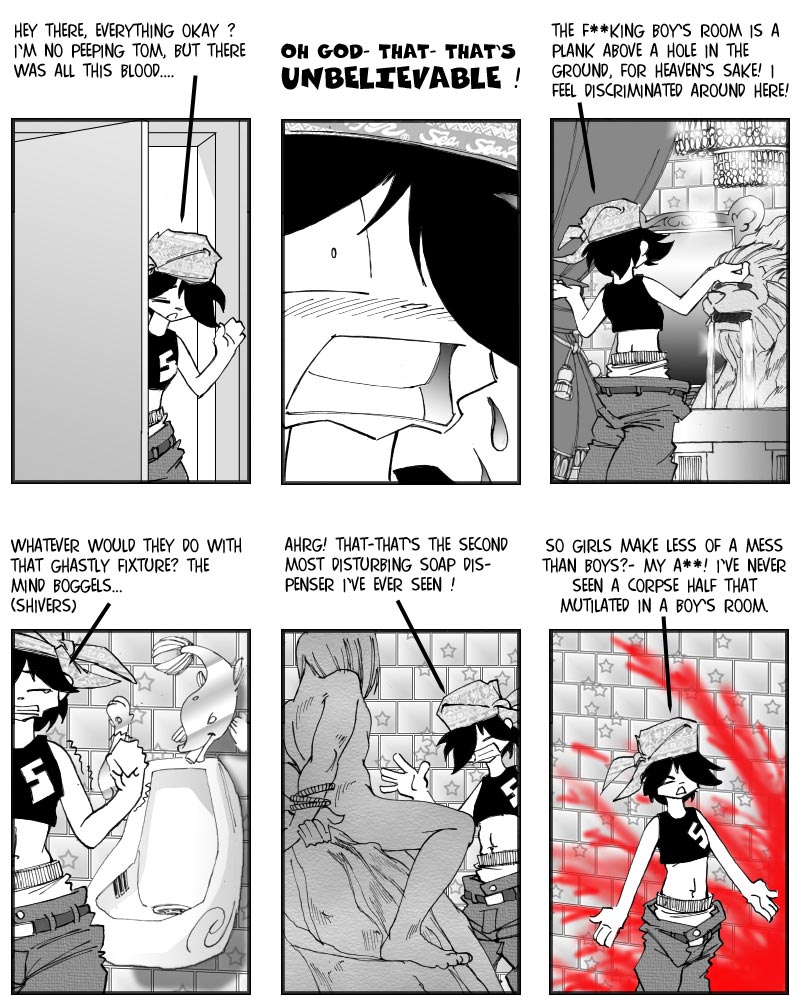 Naturally, I lack first-hand knowledge regarding the interior design of ladies’ restrooms, but I have carefully collected and combined information from countless informed sources to generate the most accurate depiction (hu)manly possible. There was one further source that gave believable evidence about a ‘guy with diverse spanking equipment’ in such a facility, but I have left that out – it’s, in all likelihood, not a standard feature, but rather specific to the club in question.

It was not possible to depict all the various fixtures of unknown functionality I heard of, so I limited myself to one of the most common ones…a porcelain bowl with a gilt dolphin spouter, and some weird lever…good men have lost their minds contemplating its possible uses…

Various types of soap dispensers were reported to me, the majority of which were somehow disturbing. However, I did not dare to depict the most disturbing one. I still feel sick just thinking about that…

My thanks go out to the intrepid explorers, who, driven by men’s insatiable hunger for knowledge, have braved the dangers of the unknown to offer us glimpses of those parts of the map that are still marked ‘dragons might dwell here’. Those that did not come back will live forever in our hearts and minds.

Other than that, I believe this is Snuka’s first close-up. One step closer to his livelong ambition to be a male underwear model. Although I must admit that doing this strip in grayscale makes covering up his acne a lot easier than it would be in colour. XD

On Thursday…Well, unfortunately, there’s no getting around informing the Sheriff of this newest atrocity… Please vote! So far, nobody has managed to unravel the secret of ‘the joke that couldn’t be got’.

Title: Off to parts unknown

Text: Man prides himself with having explored the farthest reaches of this planet, yet uncharted regions await in the very heart of our supposedly civilized society.