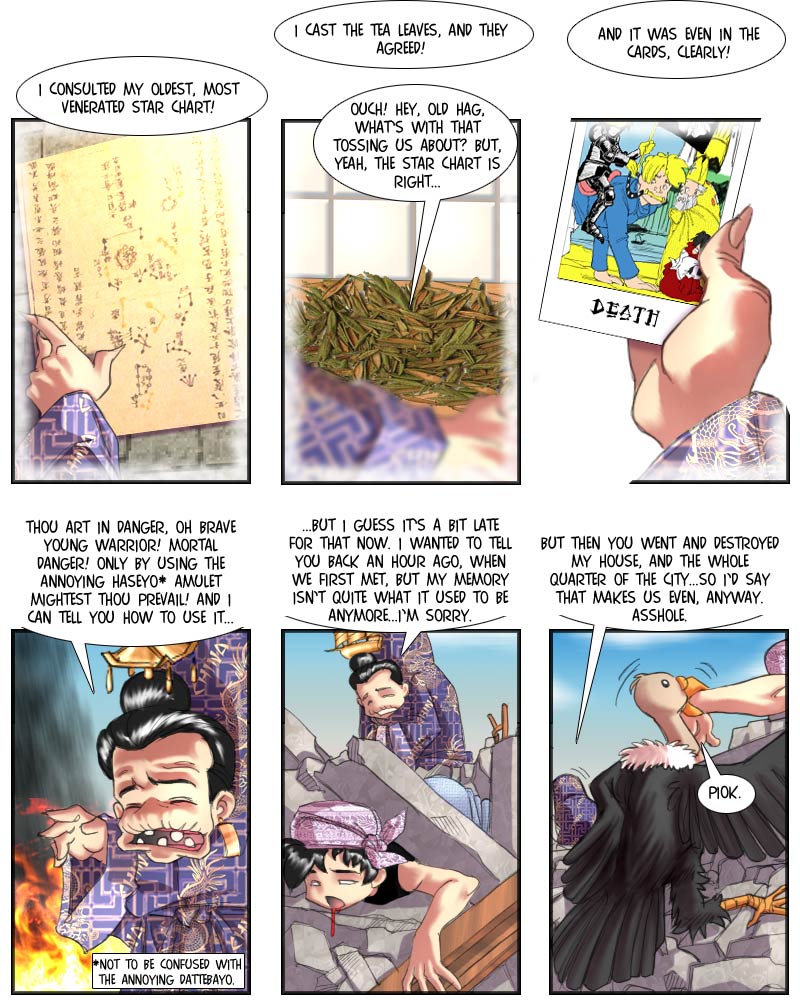 I felt it was necessary to bring some sense of closure to that prophecy thing begun here and continued here.

And it’s probably rather typical for the way prophecies and visions are usually (ab)used as story elements in movies. There are several distinct types:

– the self-fulfilling prophecy: in attempting to avoid the prediction, the protagonists actually facilitate or cause it to happen, making the warning useless.

– the vague prophecy: simple homilies or platitudes clouded in pompous and obscure verbiage. Hindsight will prove it to have predicted the future 100% accurately – too bad it’s usually of such general nature that it fits any possible outcome of a situation, anyway. Useless.

– the ignored prophecy: This one is both accurate as well as potentially helpful, but the protagonists stubbornly refuse to acknowlege it, in order to move ahead with the plot. Awards double bad script points when the protagonists also have to ignore common sense in the process. Useless.

– the belated prophecy: This one is also accurate and potentially helpful, but is delivered only at a point in time at which nothing can be done anymore to prevent it from coming true. Useless.

– the wrong prophecy: This one most often predicts that a certain task is impossible to achieve for the protagonists, who then go on and promptly accomplish said task. Useless.

In conclusion: prophets and astrologists in fiction tend to be about as useful as in real life, even if the setting would actually allow for magic to function…on the pro side, they usually tend to offer their services for free, in stark contrast to their real life counterparts. =P

And what must be really galling for good ol’ Suzie Wong is that, if all her prophecising wasn’t fated to futility by design, she might actually have saved her home…and this strip was draw a while ago, before real estate became worthless. At least one castmember is very happy with the outcome, however: Vulture, who had hoped for a gnaw or two at Snuka’s body since way back in Egypt. Which of course means that, as long as Vulture is around, Snuka will in some way always remain with us.

(As regards panel four…yes, the ‘dattebayo’ is annoying, at least in the long run. =P)

More on Monday, and don’t forget to check out the new voting incentive.