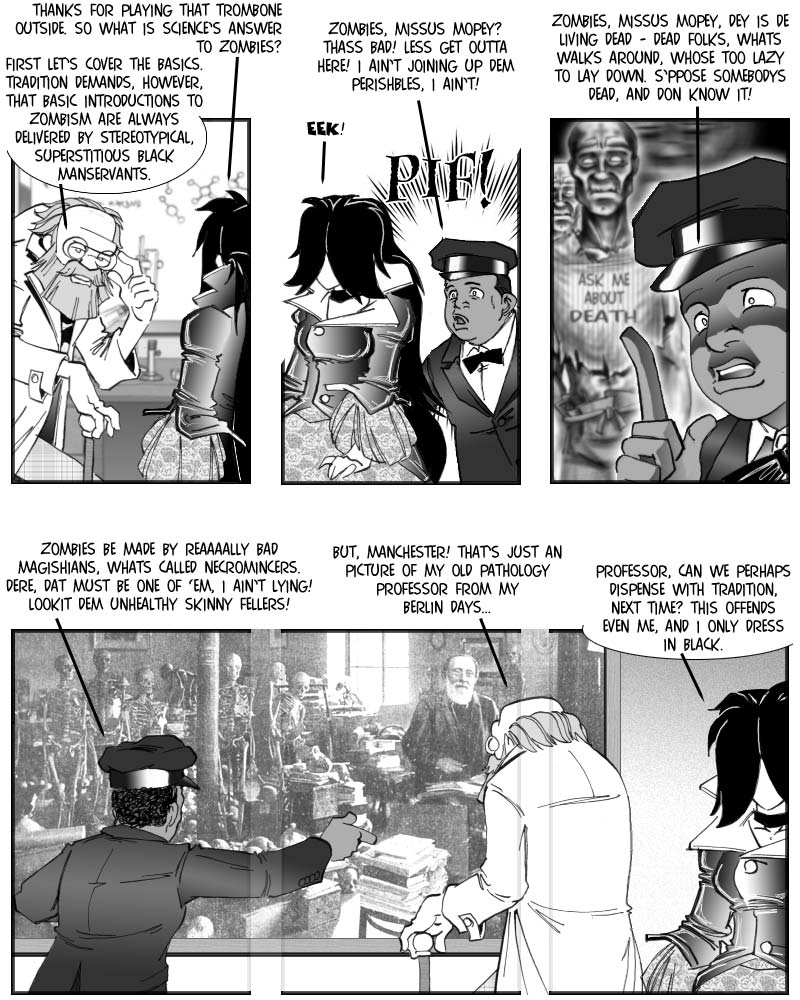 The first one is by Maria and Michelle of Shounen-ai Kudasai, unfailingly cute, and finally reveals the terrible secret behind Professor Dr.’s marvelous scientific achievements.

And this beauty is by Mr. Bob of Star Bored, awesome, and finally reveals that he can draw my cast better than I can. O_o;

Now on to today’s episode. I’m really not out to offend anybody, but this, too, used to be one of the standards of early B-movies, especially in the zombie genre. It may be a somewhat sad chapter of B-movie history, but it’s a chapter nevertheless. In fact, most of Manchester’s text in panels 2 and 3 is taken from various movies featuring Mantan Moreland, who played countless superstitious valets over the years. Naturally, posthumously he tends to get harshly criticized for the kind of parts he accepted, but the sad fact of the matter is that other parts just weren’t available to black actors in the thirties and forties. While it would, from a certain viewpoint, have been more dignified to turn such roles down (ending up looking for another job), the question is whether that would have helped anybody – would there even be a Samuel L. Jackson today, if people like Moreland hadn’t blazed a trail, in whichever way was open to them? (Moreland was one of the first black actors to receive top billing, after all, cheap and exploitative as the movies in question might have been.)

And horror movies offered a much more favourable view of the stereotypical role, anyway – black manservants were also depicted as superstitious and cowardly in other genres in those days, but in a supernatural horror movie, their superstitions were at least ultimately justified. And they got their heroic moments, too, even if not that regularly. Moreland’s roles, for example, might have often required him to bolt in panic at the slightest sound, but he often returned just in time to play his part in saving the day.

Now for something completely different: The photograph in panel 4-6 really made me crack up when I stumbled across it, and I just knew I had to work it in somehow. A necromancer, surrounded by his unholy tomes and his bodyguard, whose loyalty is undying…it’s just so perfect. In reality, however, it is indeed Professor Rudolf Virchow, founder of cellular pathology and anthropology, in his office in 1896. Obviously, he saw no need to keep his skeletons in a closet…