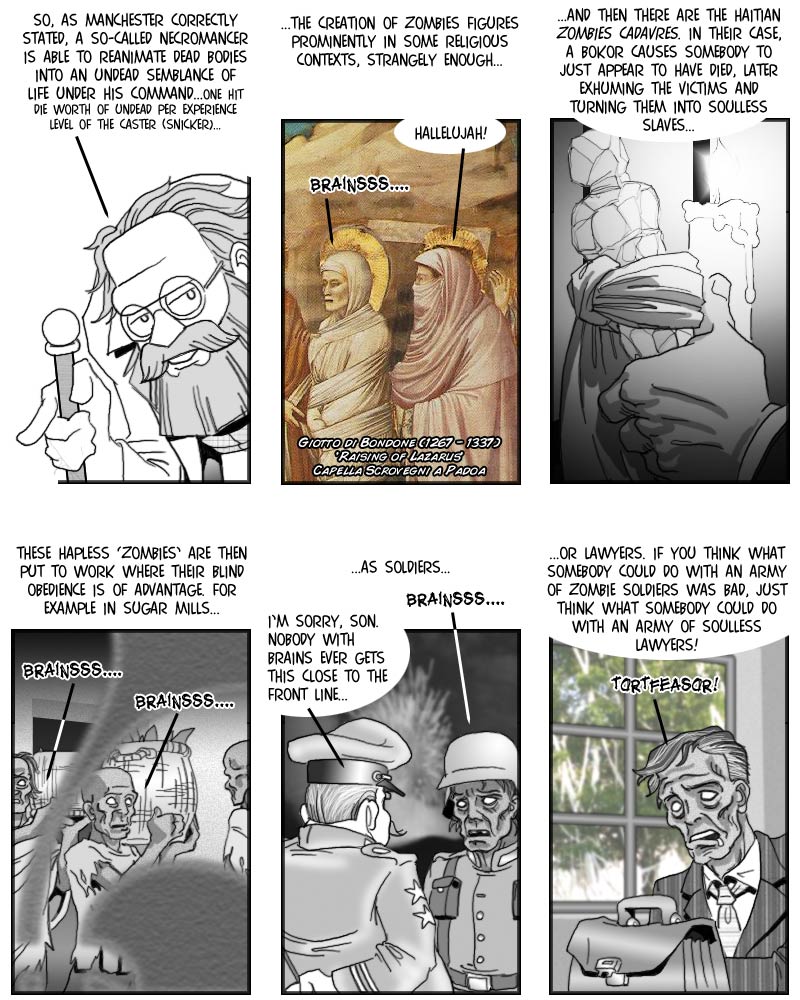 Mr. Bob, of Star Bored, outdid himself (somewhat, and myself by a much wider margin) by designing the just-indescribably-perfect BMC poster. Here’s a sneak peek, full version resides in the fanart thread:

On to today’s comic strip.

Given how blatant exposition numbers among the classic characteristics of a B-movie, I have few qualms of devoting another episode to Professor Dr.’s fascinating introduction into the zombie myth.

Interestingly, the version of the myth described in panel 3 is actually the original, Haitian one. In this original myth, a zombie is not actually a reanimated corpse, but rather a living person under the hypnotic influence of a practitioner of ‘black’ voodoo (a bokor). In order to get hold of his victim, the bokor uses a special powder to cause the victim to just seemingly die, and later exhumes the living, but paralyzed, person and casts his hypnotic spell. The victim’s body does not decompose, even if the general appearance is described as corpse-like. If the bokor’s spell is broken, the victim returns to ‘full’ live.

As far as movies go, however, only the very early ones (beginning with “White Zombie”, starring Bela Lugosi), stuck more or less to this original myth. Under the influence of the Vampire myth (which in turn is based on a thread of resurrection myths running through Christianity, Judaism and Ancient Egyptian theology), books and especially comic books soon started to depict zombies as undead creatures – dead bodies magically reanimated to something resembling life. The movies soon followed suit. The idea that zombies consume their victims’ brains is similarly a later addition to the myth that has by now become standard. These early undead zombies were always the results of some supernatural intervention, but in newer zombie movies, pseudo-scientific explanations (radiation, pollution, genetic experimentation) often replace magic as the cause of zombism.

On a technical note, if you notice anything odd about the linework in panels 1 and 2-6, it is because this strip is one of only a handful I did in early 2006, when my scanner was broken. I usually do pencils and ink traditionally, and only add the shading digitally, but these few strips were actually done completely digitally.

P.S.: I’d also like to say that I didn’t intend to offend any lawyers with this strip. I’d like to say it, that is, but it would be a lie. But let’s say that there are only certain, specific lawyers who I would readily liken to a soulless revenant. =P