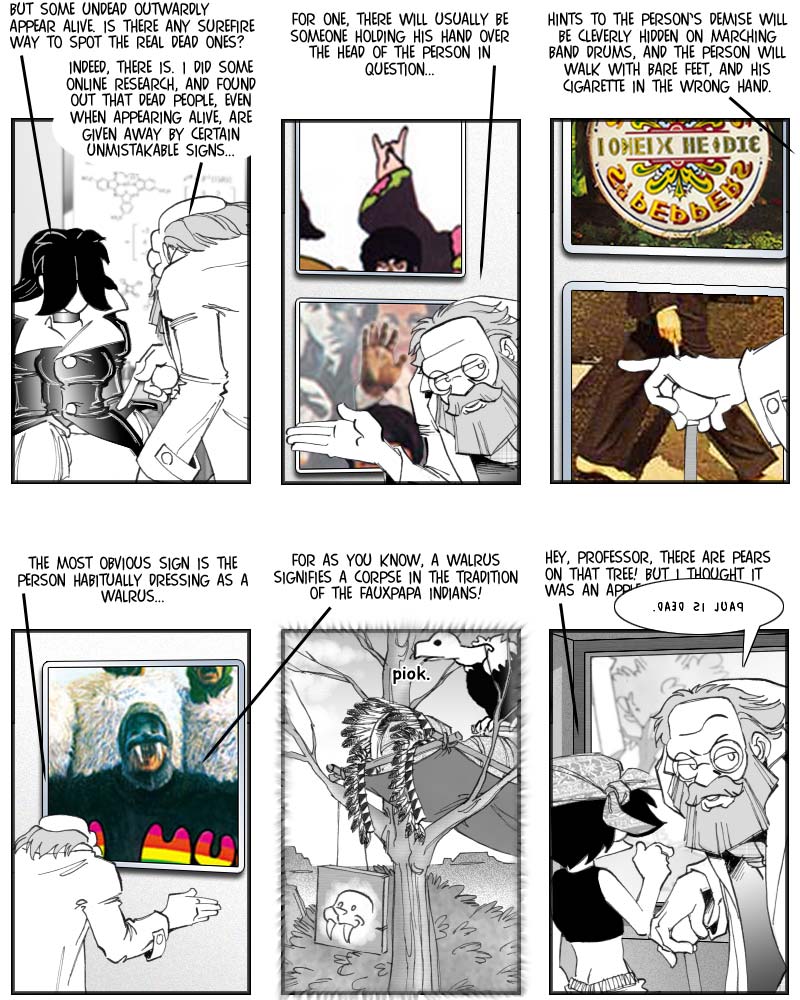 AND YET MORE NEW FANART!

Alexander, of Greece, seems to possess prophetic abilities, for his fanart features none other than Vulture, of chapter 1 infamy, who cameos in todays strip:

On the subject of today’s episode, I felt that any discussion of zombism and resurrection would be incomplete without mentioning the ‘Paul is dead’ urban legend. Once actually accepted as true by a not inconsiderable number of people, it is still kept in circulation today, even if mostly only for the sake of humour – a conspiracy theory light, if you so will. The basic mechanism behind it is the same, however, as for most ‘serious’ conspiracy theories: Create a random scenario, then collect all isolated facts that just happen to fit it, or can be made to fit it – at some point, people will start to believe in it, just because such a ‘wealth’ of evidence “simply cannot be a coincidence”. The same (non-)logic is applied to the obscurity of your ‘hints’ – come up with something as far-off as that ‘mirrored-upper-half-of-the-drum’ clue, and people so inclined will believe it just because it’s so absurd that it just must have been on purpose. Another mechanism popping up in most such theories: unsourced statements that are, nevertheless, nearly impossible to disprove. Just claim that a walrus is an Indian or Innuit symbol of death, without stating any sources – who could claim such perfect knowledge of all myths of every tribe that he could outrightly deny that?

This episode’s B-movie moment comes in panel one, where Mopey, out of the blue, asks a question completely unrelated to what has gone before, just to set up the Professor’s exposition of something that will have no further bearing on the plot.

I drew this strip some months ago, and when I added the final touches yesterday, I actually felt it necessary to check online whether Sir Paul is in fact still alive. I’m so far out of the loop by now that I thought it possible he could have died in the meantime without me learning of it, and that would have made all of this pretty morbid, indeed.

A new voting incentive today, a conclusion of sorts to the whole Link/Luigi angle. More on Monday.