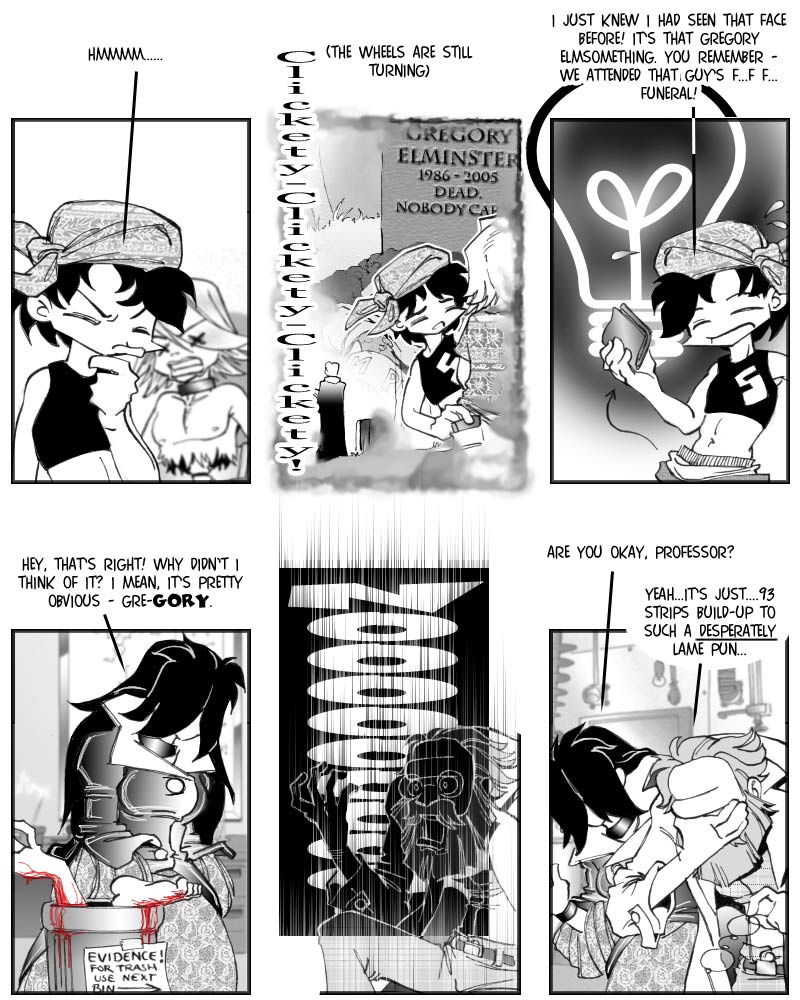 Hey, cut me some slack, Professor – I’m trying my best here! Admittedly, he has something of a point, there. I did, indeed, name the character Gregory just for the sake of this, one, pretty lame pun, and I guess that *is* pathetic – still, he needed *some* name, anyway, now didn’t he?

The right staging of ‘revelation’ sequences is an important part of B-movie tradition. No deadpanning here – visible shock is the order of the hour, even if it’s completely out of character and illogical. If you’re keeping track, this is the fifth revelation scene involving Gregory, so there’s hardly anything left to reveal to the audience – but it still needs to be done by the book. (Or, to quote Steven Summer: “The audience had already seen his face before, so we digitally added some bugs.”)

If you are wondering what Snuka is holding up in panel three, read again what he said at the funeral at the very beginning of the chapter. And that’s also what’s depicted in the flashbacky montage in panel two, even if it is a flashback to something that hadn’t actually been shown before.

Professor Dr.’s lab occasionally provides services for the coroner’s department, and he is very strict on following all the regulations – and those require ‘strict separation between body parts considered evidence, and normal household trash’, therefore the label on the bin. Well, it *is* pretty embarrassing when the deceased person you labeled ‘heavy smoker, as evidenced by residue in his lungs’ turns out to have never smoked a single cigarette in his life – all just because somebody had emptied the ashtray into the wrong bin.

Tune in on Monday to learn of Gregory’s (we can now disband with the freshly coined NVFIK moniker, thank you very much) future fate, and please vote.