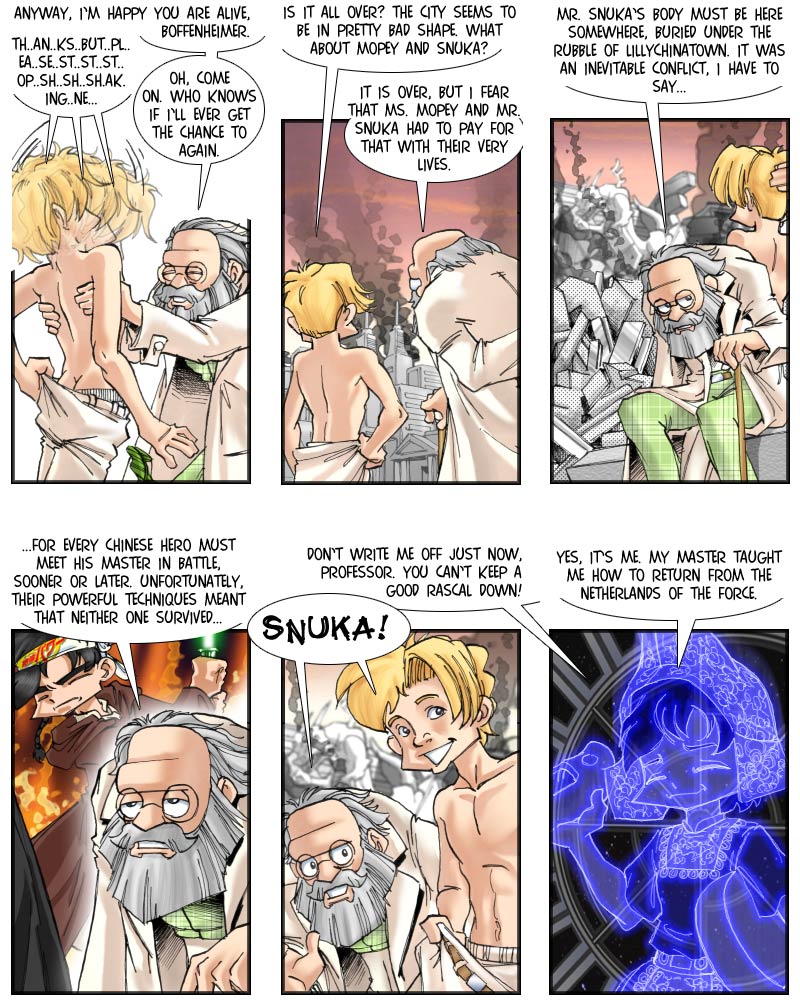 And thus the Professor’s little troupe of misfits is one step closer to being completed again.

Under normal conditions, of course, I couldn’t have just brought Snuka back. Death is not necessarily fatal for fictional characters, but their miraculous return typically requires one important precondition: the body can’t have been found. In Snuka’s case, however, they did find the body. Then they resurrected the body as a zombie, which was then succesively mutilated down to incoherent assemblage of limbs and finally incinerated in the explosion of Akun’s ship. Not easy to find a loophole for that one, but fortunately Snuka happened to be some kind of Jedi in some never properly explained way.

Jedis can return from the dead as a sort of bluish-shimmering ghost, if they are popular enough or the plot otherwise requires that to happen. The place they are supposed to return from, if I remember correctly, is called The Netherlands of the Force. And that makes perfect sense, I think – since we’ve already established that all Dutchmen are weird, mutated half-man/half-sefood creatures who go out to sea one century-long trips, the Netherlands must be mostly abandoned for most of the time, so all the dead Jedis wouldn’t bother anyone there. Fortunately I know a lot about the Netherlands from postcards and A Dog of Flanders, so I had no trouble imagining how Snuka would look returning from there: wearing a blue dress, a pointy, lace hat and wooden shoes, and carrying cheese.*

But Snuka had to wait for the perfect moment, of course – fictional characters can only return from the dead at that precise moment in time when other characters are reminiscing about them. He had waited and waited for that moment while Biff’s tale dragged on – he had almost given up hope anybody would ever remember him.

*Alternatively, I could have depicted him in typical Jedi robes – you know, that kind of robes everyone thought was just typical Tatooine desert hermit clothing, until it was ret-conned into a Jedi uniform, making Obi Wan’s behaviour more and more illogical.