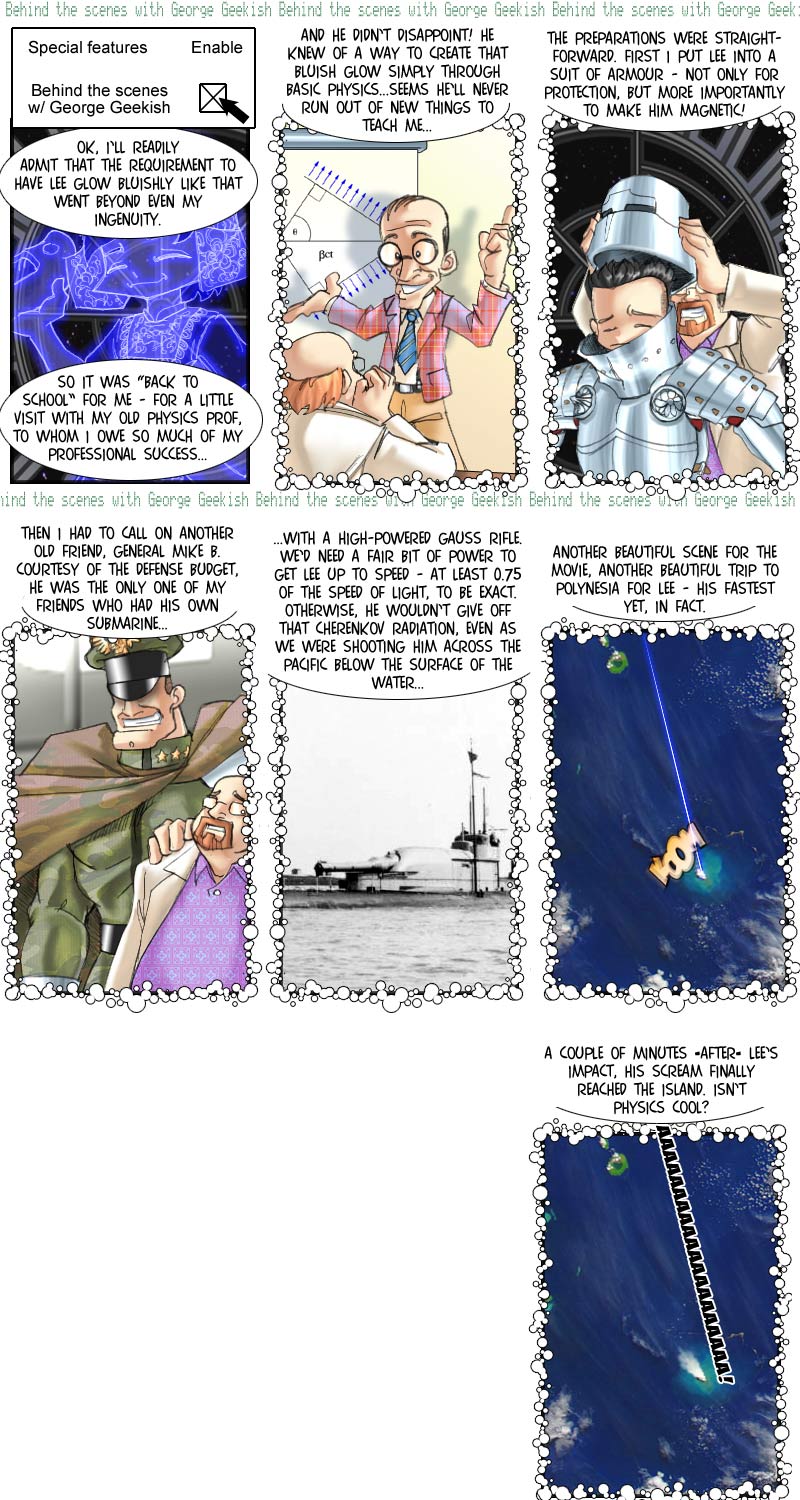 Yeah, that was one of the more difficult special effects on that production. The main problem was that, at 0.75 of the speed of light, they only got very little footage out of a single shot…so they had to shoot Lee across the Pacific over and over and over again. And Lee had to point a hand camera at himself the whole time…and keep it steady…and if he moved, they’d have to do the shoot again. Suffice to say, it took a long time to get all of the required footage. There would have been the alternative of simply using a CG-effect…but with General B. volunteering his sub for the sheer joy of shooting people across the ocean, and Lee labouring under a virtual slave contract, it would simply have been a bit more expensive.

On the positive side, at least Lee got some protective equipment, this time around. That old suit of armour (which George had left over from some fantasy movie) offered him excellent protection. … Well, the first time, that is. From then on, it got smaller and more deformed with every impact, making it somewhat less than perfectly comfortable during the later stages of the stunt.

George really owes a lot to his Physics professor…who really can’t be blamed for the results, though. He’s a theoretical physicist, after all, so it has never even occurred to him that George could actually try to put anything he told him to practical use. George, of course, would never tell him – Lee is too much of a challenge to the laws of physics to allow his old Professor to learn of him. Lee would spent the rest of his days carefree and comfortable as a study object in some research lab*, and that would be a total waste, now wouldn’t it?

As regards panel five, that’s an actual picture of a submarine equipped with a BFG – not a Gauss rifle, but at least a 12in Battleship gun. HMS M1, launched in 1917, sunk in 1925, was not really a huge conceptual success…but proven ideas** tend to turn up again, sooner or later.

* Which would be a terrible ordeal for every normal person, of course – but for Lee, it would be paradisical, compared to his current line of work.

** Yeah, so it was proven a bad idea – but it has also proven that it’s a bad idea that can convince people that it’s a good one, and with that track record I’m sure we haven’t seen the very last of it.