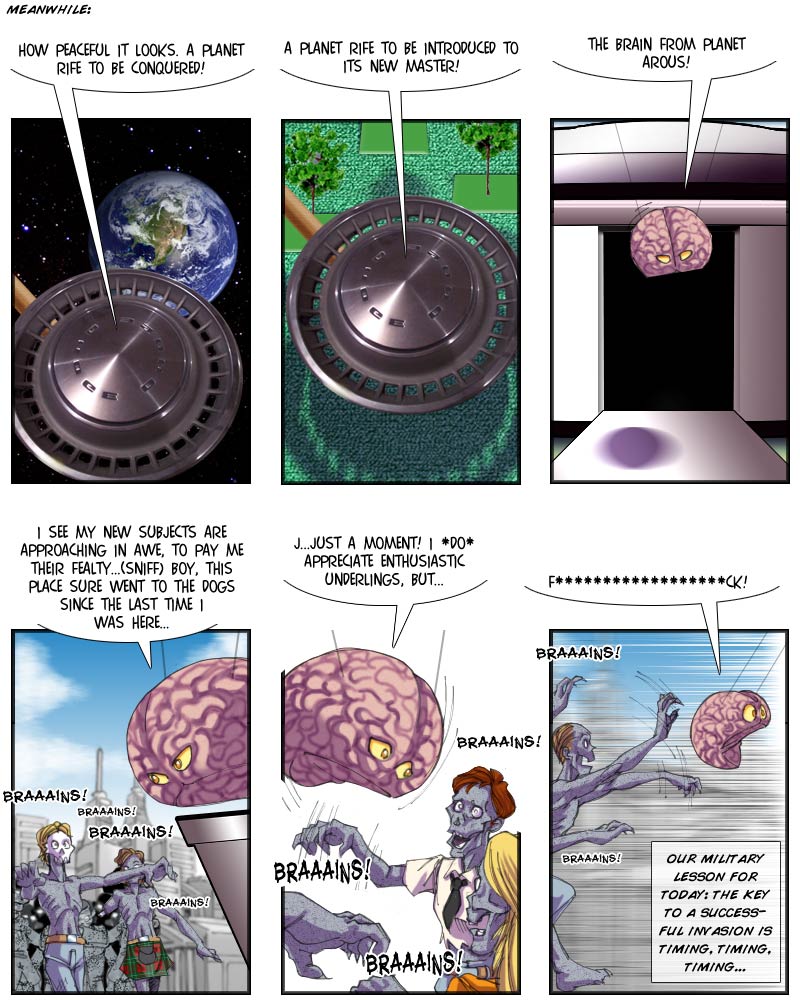 A short intermission. “Versus” movies constitute their own subgenre of B-movies – “Frankenstein meets the Wolfman”, “Alien vs. Predator”, “Godzilla vs. the Sea Monster”, “Billy the Kid vs. Dracula”, “Kramer vs. Kramer”, “Dracula vs. the Werewolf in Frankenstein castle, while the Mummy is in the kitchen making popcorn” – the list is practically endless. (And yes, they are all B-movies, save for a very few better ones that adopted “vs.” titles for the purpose of satire.) I think it’s one of the best types of fanservice: you don’t leave your fans pondering, theorizing and arguing about the potential outcomes of match-ups between your various protagonists – you just show them! (And make a buck on the side…)

That being said, I’m surprised that, AFAIK, there hasn’t yet been any match-up between brain-eating zombies and any of the countless bodyless brains that populated monster movies in the fifties – I mean, talk about natural enemies! I humbly aspire to make a small contribution towards amending this outrageous shortcoming with today’s episode.

There really were any number of such oddly cerebreal aliens in 50ties fiction…somehow, I can’t help but wondering at the mindset of somebody who contemplates a bodyless brain as a potential ‘higher’ form of life – might that have been born from the rampant sexual repression back then? Of course, in the case of the brain-creature I picked for this episode, “The Brain from Planet Arous”, this is largely offset by the fact that the alien brain infest a human host, who then suffers from heightened sexual drive – and, yes, that’s why the planet is called ‘Arous’. XD Sexual repression or not, the scriptwriter sure went out of his way to get a little exploitation in on the side. But get an eyeful of those spectacular special effects:

As for the first two panels, well, the use of hubcaps for depicting alien spacecraft has a long tradition, both for movies as well as hoaxes…and, admittedly, some hubcaps just look loads better without a car attached, anyway.

Timing is really one of the key factors in any invasion – one of the little lessons of the bay of pigs: make sure all parts of your force set their watches to the same time zone.

That’s it for today, the new voting incentive features Biff. More on Monday.