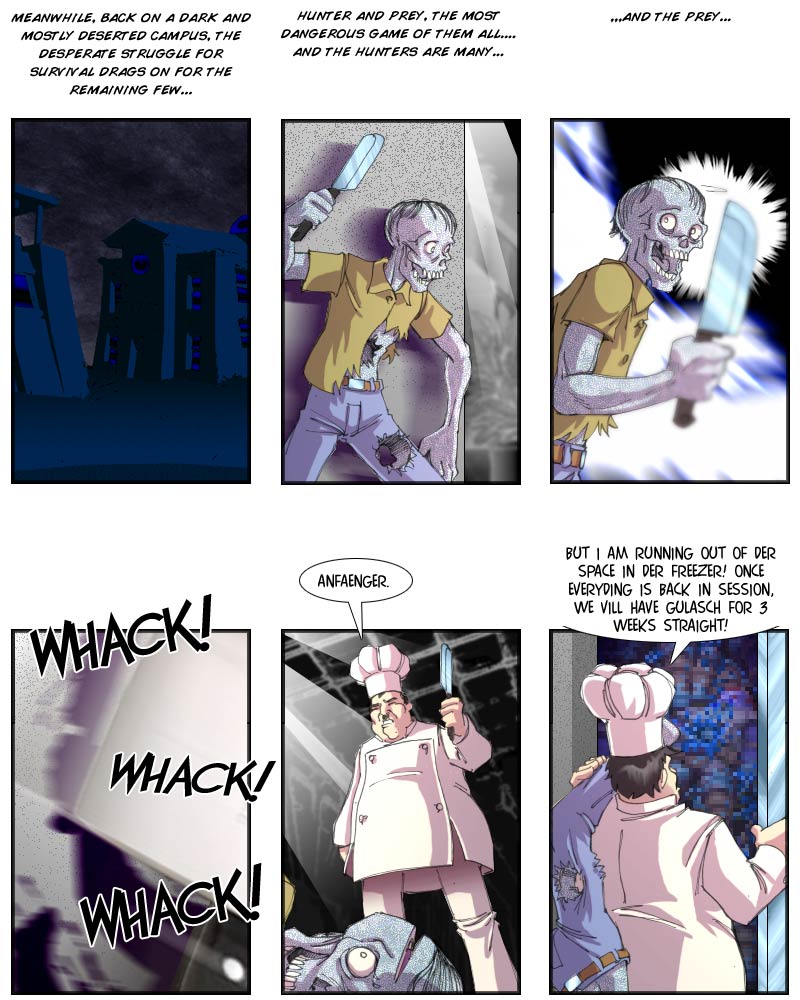 A short update on what’s going on on the Lillytown U campus, which is by now completely overrun by zombies. The situation is looking desperately grim for the few remaining surviors, and getting grimmer by the moment…

…save, of course, for Mr. Neibiesler, who is used to defending his kitchen agains worse threats – like rabid vermins, hungry students, and incorruptible health inspectors. Naturally, he uses the opportunity to stock up on cheap meat for the needs of the university cafeteria. And, no, he doesn’t mind that it’s meat from rotting, human corpses – still much better than what he usually can afford from the measly cafeteria budget. And there’s nothing that a little “dry aging” in the freezer couldn’t fix – plus his secret tip: lemon juice is great for covering up a certain rotting odour in meat.

The text for panel two is an allusion to Richard Connell’s short story, “The Most Dangerous Game”, about an isolated island, a mysterious Russian count, and his predelection for challenging hunts. There have been several movie adaptions, most notably one done by RKO in 1932 – using sets and actors available from the concurrent production of “King Kong”. Fay Wray actually had a bigger and better part in this production than in the movie that turned her into star a short while later. The movie was (somewhat poorly) remade in 1945, with Count Zaroff joining a long list of fictional Russian villains temporarily switching their nationality during WW II – he became “Erich Krieger” in this version…like most others, he was turned back into a Russian during the Cold War.

Well, back to our heroes on Thursday. Today’s voting incentive features – a furry critter.