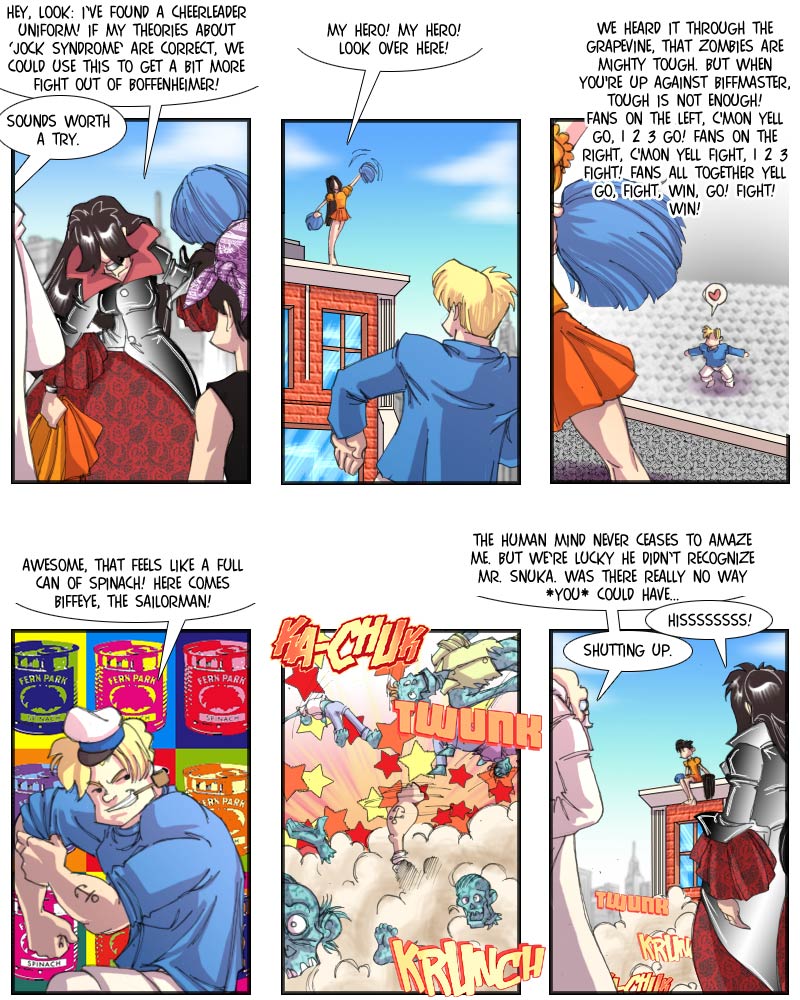 Studying “Jock Syndrome” is indeed one of Mopey’s main fields of study. It started out as an Anthropology project, but she soon moved it to Biology – after evidence had mounted that Jocks aren’t actually hominid. The current state of her research suggests that “Jock Syndrome” is a kind of genetic disorder affecting certains species of reptiles, causing them to take on an outward similarity to higher primates. This superficial similarity is often enough to get them enrolled in college sports programs by accident, especially since some of them seem able to mindlessly parrot ungrammatical fragments of human language. Needless to say, her study is bound to be a bit controversial, once it’s published, but Mopey is confident she makes a convincing case – and colleges would save a lot of money by subscribing to her theory, especially as regards rooming of jocks. Cages are a lot cheaper than dorms…

Mopey also studied the motivational patterns of jocks extensively, theorizing that they are controlled by a simple motivational field with two poles: Boobs and Booze. Her successful application of her ideas to motivating Biff today will surely be mentioned as an example in her study, if any of the persons involved should happen to survive the whole zombie incident, that is.

Speaking of scientific studies and super strength, Popeye the Sailorman’s predilection for spinach, and its effects on him, were based on a faulty study published in 1870. Because of a mistake with a decimal point, the study grossly exaggerated spinach’s nutritional value, and especially its iron content – and that’s why Elsie Segar had Popeye explain his superhuman strength with spinach consumption, and the later cartoons actually used spinach as a strength elixir in a much more literal way. While the study was later corrected, public perception of spinach continues to be influenced by it. (And it’s still got lots of vitamins, after all. =P)

There was, of course, no way that *Mopey* would ever put on that cheerleader outfit herself – no, she had planned on Snuka’s participation all along. Biff’s eyesight isn’t that great, and with a wig and a bit of distance…and a rousing cheer, of course. And now Snuka’s got another thing in common with GWB: having been a male cheerleader.