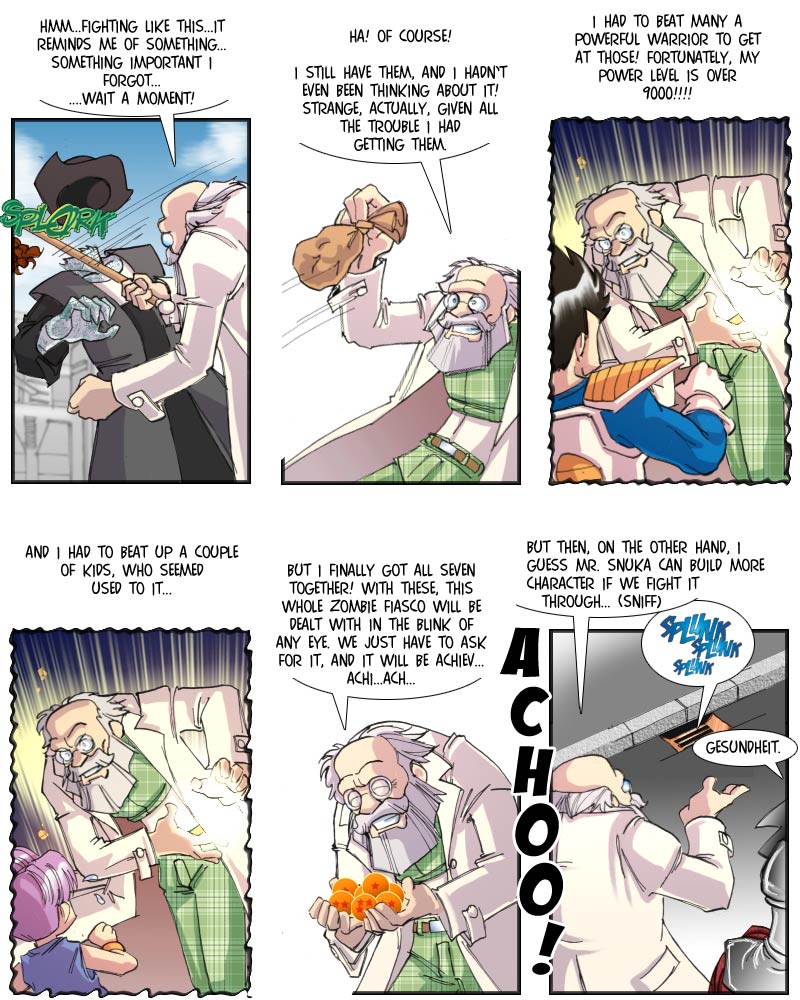 I felt it was necessary to have this episode to answer, once and for all, one overbearing question: “Why don’t they just use the dragonballs to get rid of the zombies?” No, nobody had actually asked me that…but I’m sure someone thought about it. There’s always someone like that. And since any answer like “There are no dragonballs in my story.” would never get rid of that last remnant of lingering doubt in the minds of true believers, I decided it was simpler to actually introduce them, just to get rid of them for good. If you wonder why they are now gone for good, remember this episode. OK, so the answer is: “They cannot use the dragonballs because they fell into the sewers and cannot be recovered. Deal with it.”

I bet nobody is surprised that the Professor has a power level over 9000!!!! After all, he is old, deformed and frail – so her perfectly fits the common double bill of geriatric bum/incredibly powerful martial arts master. Of course he wouldn’t normally beat up children, he has a hard time scolding one…but child abuse is so rampant in Dragonball Z, he wouldn’t have fit in, otherwise. I mean, “good parenting” in Dragonball involves forcing your kid into an absurdly strict training routine until he’s a freakish miniature Schwarzenegger at age eight, iflicting massive amounts of physical, mental and emotional pain on him so he gets used to it, putting him up to fighting an invincible enemy against all odds, standing by idly while he gets pummeled beyond recognition by said invincible enemy, standing by idly while he gets killed, and finally resurrecting him again to start it all over. Oddly, this then results in well-adjusted, happy and cheerful kids. I’m just hoping nobody starts to lift parenting pointers from that show, or they’ll accustom their kids to street traffic by running them over in the driveway. Repeatedly. With a pickup truck. And then, the Professor uses pretty much the same line of thinking as an excuse in the last panel…

In other news, today is Columbus day! By way of celebration, we feature good old Christopher as a guest zombie in panel one. People who support this specific holiday can revel at his inclusion, and people who object to it can revel at his decaptitation – I’m just trying to keep everyone happy, here.

That seems to be all for today – check out the voting incentive for a cute bunny. More on Thursday.