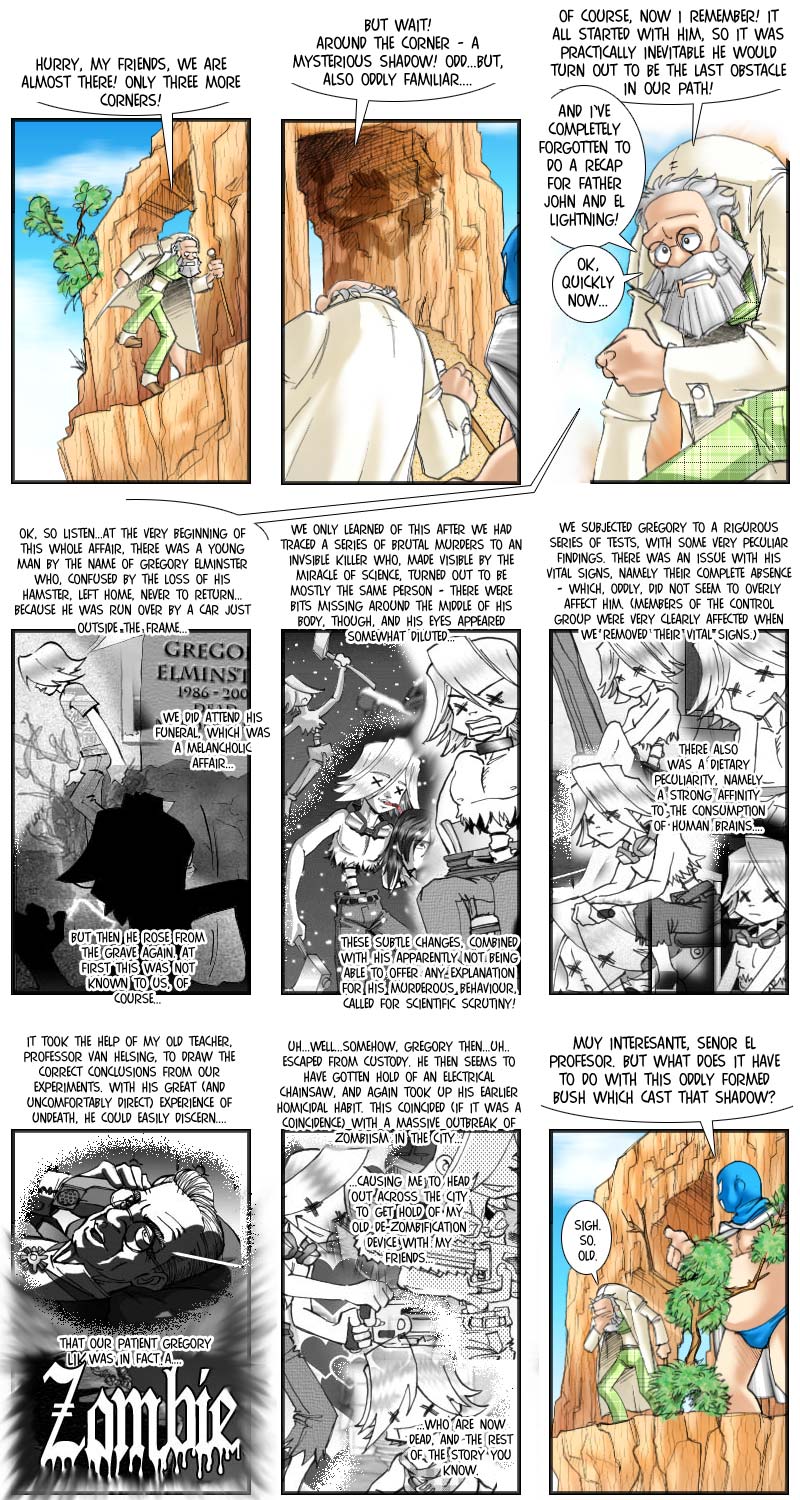 It is, of course, completely up to you to decide whether the Professor’s statement in the last panel refers to his age, or the age of the joke involving some item of vegetation casting a deceptively anthorpomorphic shadow (the joke actually being even older than the Professor, if you can imagine that).

Wisdom also comes with age, however, and so it is not surprising that a veteran fictional character like the Professor would know enough about genre standards to discern that Gregory must still have some role to play in the grand scheme of things – even in a very badly written movie (or webcomic) a character with such a central place in the opening act can’t just exit stage right into obscurity. (Yes, I know…Maleeva in Frankenstein meets the Wolfman…) Full disclosure: There was a bit of foreshadowing planned for Gregory’s future involvement, and it would have appeared in Mopey’s death scene (here) – but then I realized it was just too blatant, and cut it out. Yup, hard to believe – you’d almost think my script couldn’t get any cheaper, but in some places it isn’t even as cheap as it was at first. I’d be proud, but I’m confused as to whether I should. >_>

(Plus, the recap is probably also helpful for new readers who don’t want to read through the whole meandering mess called the archive. For that purpose, I should add a little clarification to the Professor’s monologue, since he deliberatly smudges one plot point a little bit: It was him who was responsible for setting Gregory free again in a moment of absent-mindedness.)

So, even if it was a bit of an overreaction, it’s probably still a good thing to have had that little recap, even if it does not totally conform to the code of B-movies – normally, newly introduced B-movie characters get a recap only if simultaneously serves as exposition for the benefit of the audience. If the audience already has all the relevant information, all new characters are conveniently assumed to already have it, as well – even if they spent the last 30 years marooned on an uninhabited island. Conversely, if the audience needs to be given some exposition, a character can give another character a recap of an event that happened only a week ago in the presence of both – in that case, it is assumed that the character is just practicing his recapping skills.