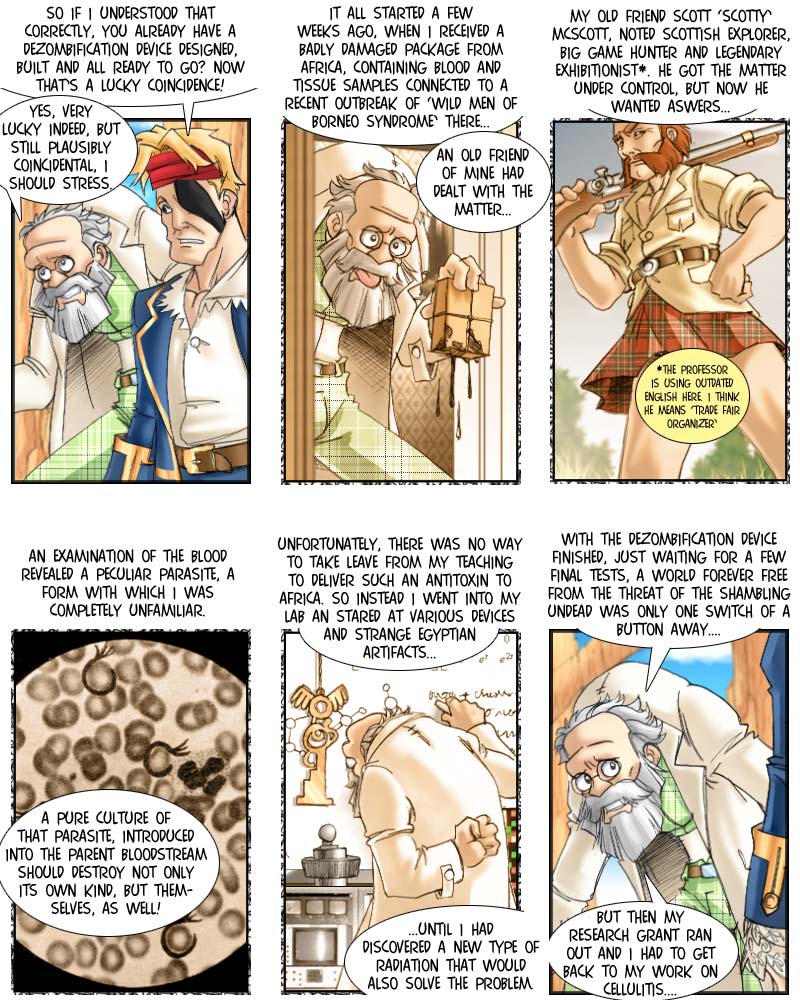 B-movie scripts tend to play fast and loose with the concept of coincidence, but still there are certain rules that do apply. Something as coincidentally convenient as the Professor having a dezombification device at hand simply can’t be left standing without any explanation. There’s no requirement for the explanation to make the slightest sense (it’s a B-movie, after all), but it’s (mere) presence is still obligatory. An easy formula for a ready-made explanation (for life, the universe and everything) involves combining Africa and pseudo-science – the two final frontiers in B-fiction.

As far as the pseudo-scientific angle is concerned, I’ve gone with a classic – the illustration in panel four is taken from the movie “House of Dracula” (Universal, 1945), where it constitutes the sight that meets Dr. Edelmann (Onslow Stevens) as he examines Count Dracula’s (John Carradine) blood under a microscope. Yup, those little bat-winged parasites are what causes vampirism, and the good Doctor hoped to be able to treat the condition with an antitoxin* – an early preview of the fabulous fifties, when science ruled the B-movie world. The text for the panel is taken from the picture, as well.

In the real world, observation is an important aspect of scientific work. In B-movies, as the Professor ably demonstrates in panel five, observation equals scientific work. Most B-movie scientists solve problems by simply staring them down – and it’s always reality that blinks first. Which kind of results a B-movie scientist harvests depend on what they’re staring at:

(In all of the aforementioned cases, accuracy of the result can be improved by prolonged staring or staring with furrowed brows/ a microscope/ a pair of binoculars.)

That’s it for today, more on Monday. In other zombie-related news, today is Zombi day in Brazil! Uh, wait…no, sorry, I misread that…today is Zumbi day in Brazil. *the concept of which was grossly simplified and distorted, as well.