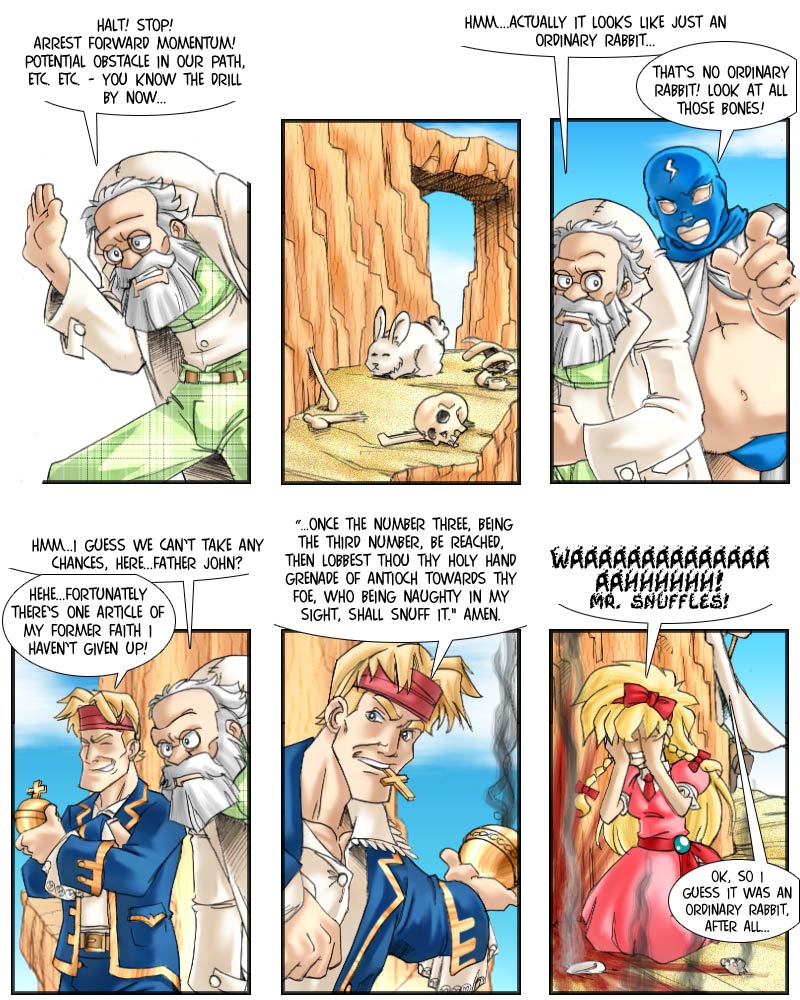 Ah, well … better save than sorry, I guess. The Professor’s probably not all that sentimental in general, at least when it comes to animals – in his many decades as a scientist, he’s probably sent one or two laboratory animals to the great test lab in the sky. Or more like hundreds of test animals, and one or two lab assistants on top of that – science used to be quite dangerous in the days when ‘safely transporting uranium’ involved the pockets of your lab coat.

Father John Captain McKenzie, meanwhile, was wise in hanging on to select articles of his former faith. Different religions have different articles of faith, obviously, but Christianity specifically has two articles that are particularly cool: the boomerang from Castlevania and the Holy Handgrenade of Antioch. Admittedly, the Holy Handgrenade differs not that much from a mundane handgrenade as far as effect is concerned, but it’s a lot more ornate, and the little recitation always adds a neat solemn touch to the proceedings (standard handgrenades are usually thrown without comment, or at most a considerably-less-than-solemn “Die, you ******* *************!”).

So what of the bones that gave El Lightning such cause for concern in panel five (“Three, Sire!”) uh, panel three? Former classmates and teachers of little Maria. Yeah, she might look cute, but she can be quite …uh, excitable if she doesn’t get what she wants. And I mean ‘excitable’ in the way Warren Zevon meant it. >_>

So why hasn’t Father John Captain McKenzie used his Holy Handgrenade of Antioch in any of the earlier confrontations? Uh … he didn’t think of it. Hrm. >_>

Anyway, that’s another obstacle forcibly removed from our heroes’ path, cute and fluffy as it might have been (the obstacle, not the path. Never trust the cute and fluffy path. >_>). More on Thursday.