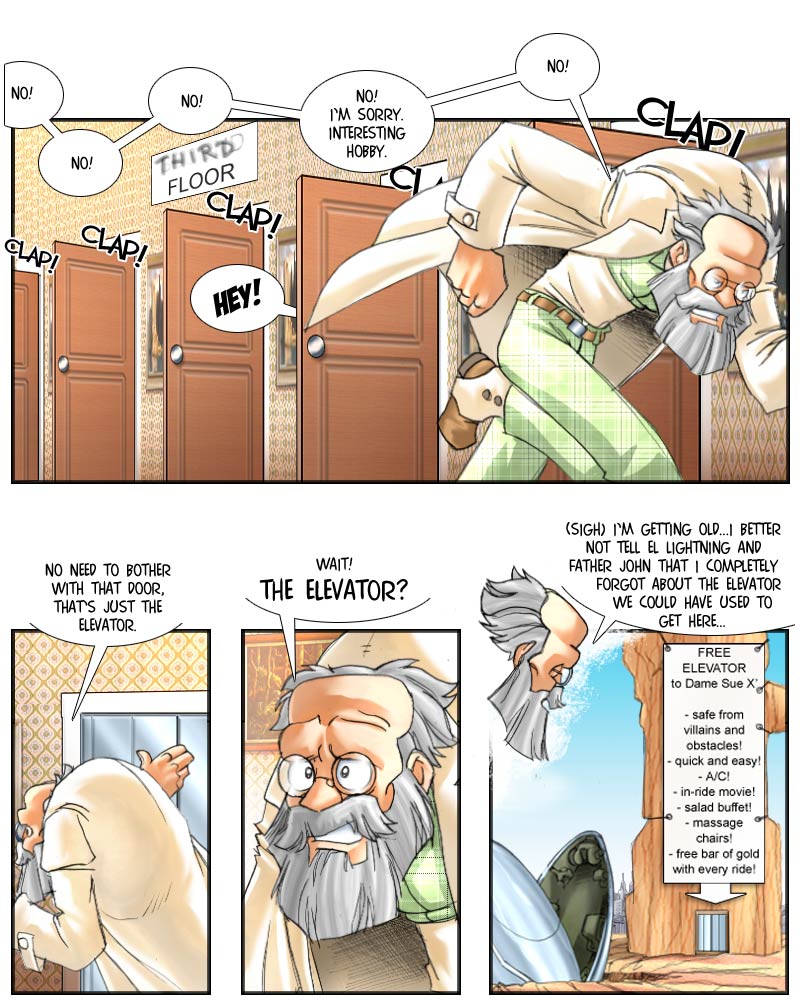 And once again I had to painstakingly create a completely new background that just happens to look deceptively similar to one you’ve seen before – but that’s just because the third floor of Dame Sue X’ looks deceptively similar to the other floors. (When the new Munich airport opened in the Nineties, their above-ground and underground parking facilities at first used identical numbering. So there was, for example, an underground facility called P1 and another one above ground also called P1 – and their lay-outs were also practically identical. Apparently the architects felt nobody could ever mix up an above-ground parking facility with an underground one, even if they looked identical down to the number on the wall. Unsurprisingly, they were wrong. Badly wrong, in fact.)

And, yeah – the complete hike up silhouette mountain would have been unecessary, if the Professor would just have remembered about the elevator. And of course there’s a convenient elevator – after all, how would Dame Sue stay in business if all of her customers would have to traverse seven hells to get there? (And that’d be several times a week, for some of her customers.) And to make sure that really no potential customers are put off by the effort to get to the palace, she’s equipped the elevator with a nice menu of fringe benefits – I mean, free bar of gold? You could sell anything with an offer like that! Even things that are otherwise unsellable…like cars, for example. >_> But then, what would all those villains have done if the Professor and his friends would have used the elevator? Think of all the strips that would have consisted of nothing but some henchman playing solitaire for six panels.

And, anyway, I think the Professor can easily be forgiven the occasional lapse of memory – he is, after all, of somewhat advanced age. How old he is? Well: in his youth, if you wanted to ride an elevator, you still had to bring the liftboy a bag of coals, so he could stoke the furnace and make steam in the boilers. It always was a major event, too, and couldn’t fail to draw a large crowd of spectators…a marching band would play popular tunes…the mayor would give a speech, praising the heroism of the young explorers that were willing to challenge the limitless beyond of the upper floors. If you rode higher than third floor and made it back to the ground safely, you had a good chance of getting a medal and some random letters to add to your name. If you came back safely from an expedition to the sixth floor (and there were, back then, only a few buildings that had that many floors), you got a choice between a knighthood and a colonelcy. Sometimes, when he rides the elevator to his lab these days, the Professor kinda feels the whole affair has gotten a bit too mundane for his tastes…