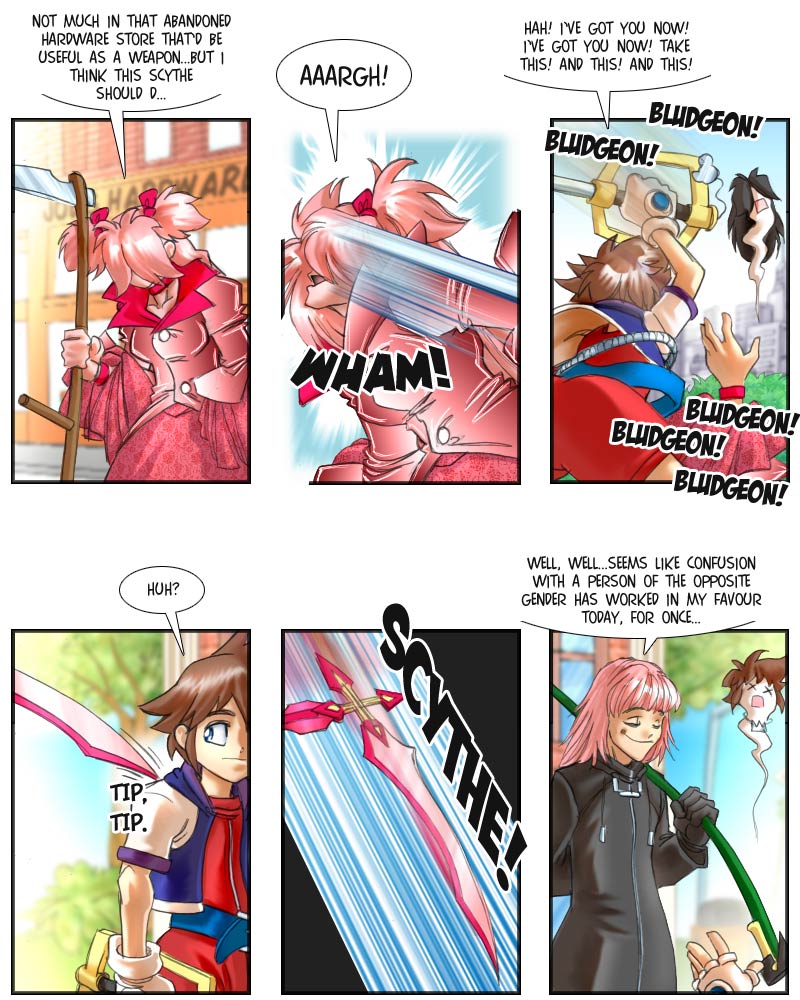 I think Mopey did an awesome job of fending for herself all alone, surrounded on all sides by hungry, brain-eating zombies…but in the end, it just couldn’t last. As the Professor has correctly pointed out, only one member of a group can survive to the end in this kind of plot – and that would naturally have to be him, since the others just wouldn’t be able to supply all the necessary exposition in the rest of the chapter*. (Not to forget the fact that he is likely the only person who could operate his anti-zombiefication device, given his usual arrogant dismissals of user-friendliness concerns.)

But if her end was inevitable, I at least saved her from being killed by a zombie, and thus forced to return as an undead monster herself. The kid who ends up mistakenly bludgeoning her into a bloody pulp in panel two is that one well-known psycho, of course. Some kid from Japan, with some strange fixation on keys – likely the result of growing up as a latchkey kid, I’d venture. Whatever the reason, he runs around with a ginormous key and savagely bludgeons near everything and -one he encounters. He’s often accompanied by two mutated freaks…some kind of sailor, whose disfigurement makes him look almost like some kind of grotesquely deformed duck, and another poor soul…whose deformation are so severe you can’t even really tell its species. And it’s not really like their intellectual capacities would make up for their hideousness in any way… In addition to his serial killing habit and his creepy-ass entourage, that kid also seems to be shizophrenic, claiming that another kid would live inside of him – a version of himself, but without a heart. OK, so if the version which is supposed to have a heart bludgeons random stranger with a giant key, what would a heartless version even be like? Bludgeoning random strangers with two giant keys?

So don’t waste your sympathy, that kid has had that scything coming…for a long time. Speaking of which, here I finally had the opportunity to use ‘scythe!’ as a sound effect…that’s really the best thing about scythes in comics – they come with their own, easily-identifiable sound effect. =3

As far as the good-looking stranger in panel six is concerned, he is one of the few exception to the rule of pink. Despite his flowing pink hair and flower spreading habits, plus generally being much more girly than any of the actual girls in that computer game franchise, he somehow manages to pull off quite a decent amount of doomy villainy of dooom.

So that’s it for today, on Monday we’ll catch up with the Professor again – unsurprisingly, since he’s now the only one left. If you followed my advice and didn’t waste your sympathy earlier, you could also have a look at the new voting incentive, and give some of it to Snuka there.

*Although Mopey made an honest effort with her blatant exposition in panel one. But nobody can beat the Professor on exposition. He can sit all alone at the breakfast table and go: “Now that I have buttered my toast, I can turn my attention to the morning paper! Oh! A sensational archeological find in China! And made by nobody else but my old friend X, who used to study with me under Professor Y. I haven’t seen X in a long while, not since we had that falling-out in New Zealand, after we had… etc. etc….”. And why can he do that? Because speaking to yourself animatedly fits the old, absent-minded professor stereotype. =P