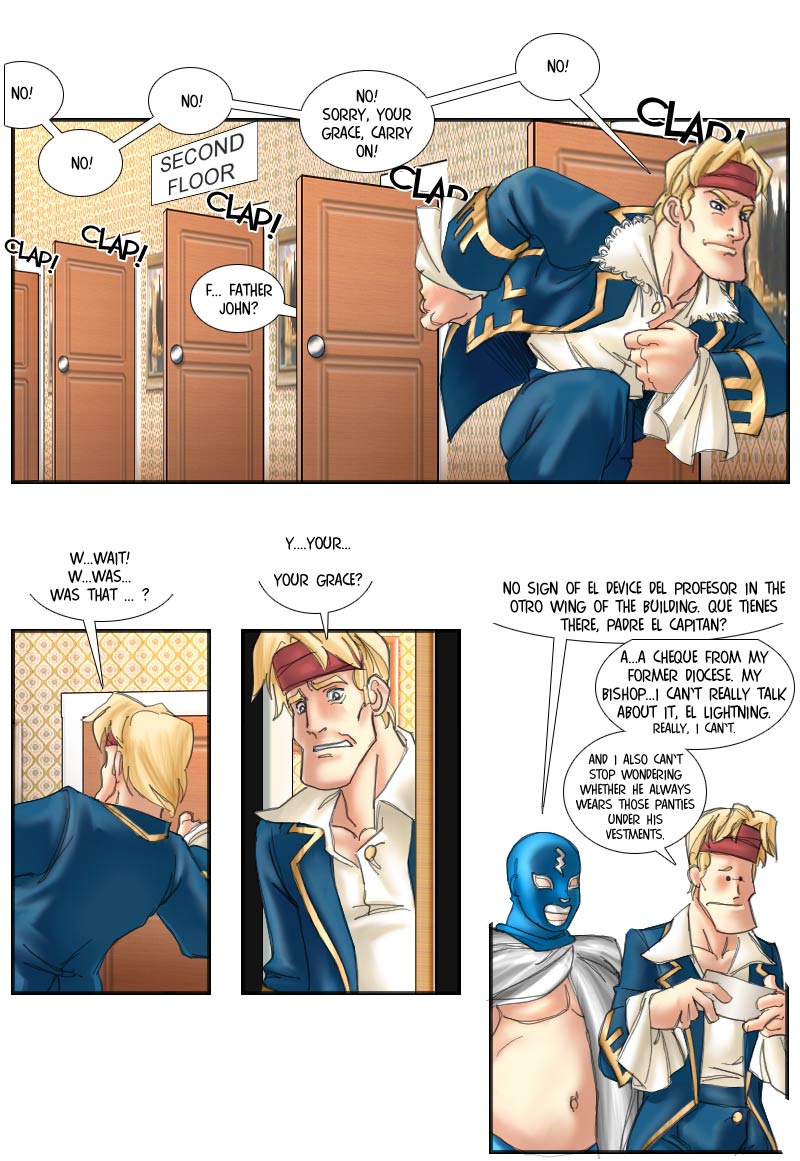 Poor Father John Captain McKenzie…he might have lost his faith a long time ago, he might have become cynical not too long after that and he might have recently turned into a pirate – but his conception of the office of bishop had still been somewhat…immaculate. No more, no more. (In case you want to spare yourself that mental anguish, just force yourself to reinterpret the strip as follows: In panels 1-3, Father John unexpectedly happens to run into his former bishop, who is at the brothel to hear confession from the housekeeper, who cannot leaver her bed due to illness. During their chance meeting, Father John reminds the bishop that he still hasn’t received his severance payment from the Church, so the kind-hearted bishop immediately writes him a cheque. Since the severance involved a non-disclosure-agreement, the Captain can’t tell El Lightning what happened – especially since he’s a bit disturbed by something he saw on his way out of the room: one of Dame Sue X’ most priced possesions, an authographed picture of Jay Edgar Hoover. Father John’s last remark referred to that picture, and was unconnected to the cheque and the bishop.)

On the other hand, despite being shocked and irritated, he kept enough of his mental presence about himself to milk a huge cheque out of the whole ordeal – proving that he’s becoming better and better at thinking and acting like a pirate. That alone should suffice to lower global average temperature by 0.001 degrees.

And I guess it was also a pretty unconvenient encounter for the bishop, himself…I just hope it doesn’t cause him to be late for anything.

And, no, those are not the same doors the Professor’s opened last week – look, you can clearly see that it says ‘Second Floor’ on the wall. (It’s not like I just recycled the background, or anything – no, I drew everything again, by hand, including every single flower on the wallpaper. I had to, because the second floor does look nothing at all like the first floor, although the differences are so subtle you need an expert’s eye to spot them. Truefax.) They have split up to cover more ground, so everyone has been assigned a different part of the building. El Lightning, of course, was faster than all of the others – for one thing, that’s why they call him El Lightning. And for the other thing, in his slightly fetishistic outfit he drew a lot less attention around that place than somebody in a labcoat. (The labcoat has turned out to be somewhat of a problem for the Professor, by now – he has the hardest of times explaining to the people he runs into that he doesn’t want their blood and urine samples to check for STDs.)