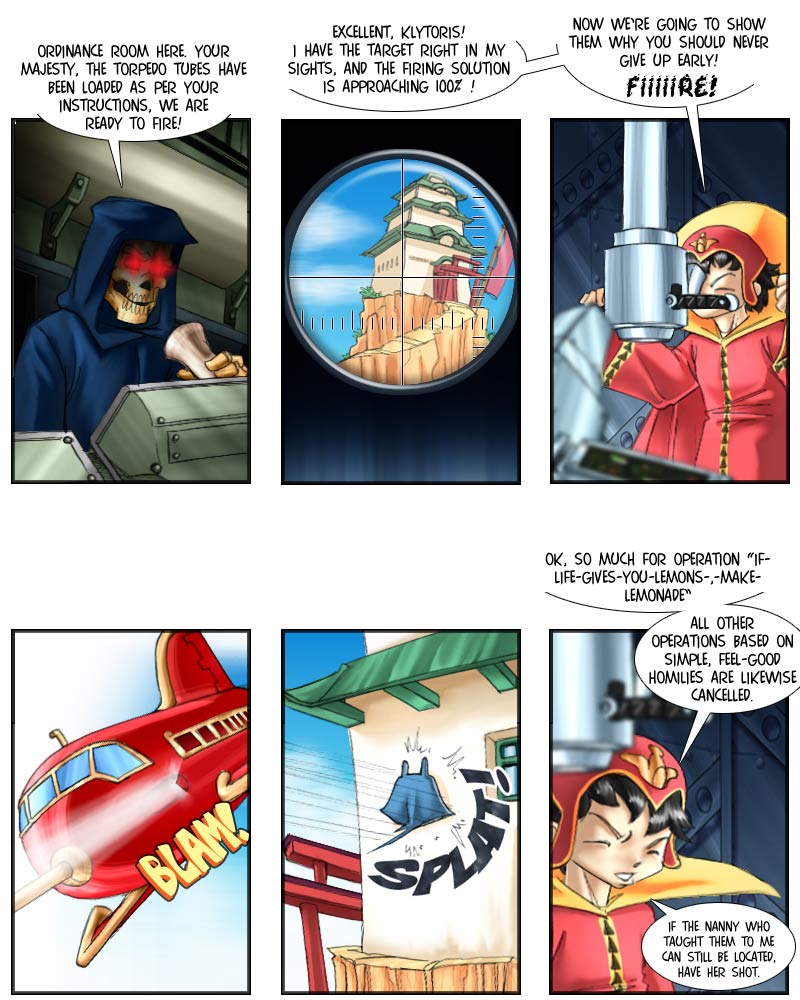 In the end, when everything has been said and done, nobody will be able to claim that Akuns failed because he didn’t make enough of an effort. Instead, they will say he failed because he’s an idiot – but then, perhaps he considers being a persistent idiot is somehow preferable to just being a plain idiot. You know, in that strange, twisted priorities, cold comforts sort of way. Right now I’m just glad, after all, that he didn’t spring for the Amuro Ray option – he’d probably have used him in absolutely the same way as that poor manta ray.

Akuns can be absolutely excused, however, for wanting to try out whether that simple homily would work out. While they might never work in real life, Akuns is a fictional character – and in fiction those things can be made to work, at the discretion of the scriptwriter. The chances would have been pretty good, for example, if Akuns were active in the world of 80ies animated kid’s shows – back then, there existed a kind of unholy alliance between ‘parent’ groups and the toy industry, along the lines of: “We’re going to try and ignore that you’re running what is basically a 23 minute toy commercial, if you in turn devote a part of each show to ‘teach’ children about the wonderful world of ridiculously simplified ‘morals’.” In cooperation between the scriptwriters and the parent groups, unprecedented preachiness was achieved – not surprisingly, since those parent groups usually contained a lot more preachers than actual parents. Naturally, the scriptwriters had to bend and twist their fictional worlds considerably to enable them to follow such simple dictums – but that actually had an advantage: compared to those contrivances, the shows basic premises of giant, transforming robots or time-travelling, intelligent dinosaurs appeared almost down-to-earth.

Consistency, of course, remained utterly elusive – every rule or moral was always and ever only applicable to the single episode in which it was espoused. If anybody had attempted to create a world, even a fictional one, that would have complied to every single one of those absurd generalizations at the same time, they’d have ended up with a plot consisting of nothing than plot holes (especially since some of those supposedly golden rules already started out contradicting each other, if not themselves). For an example, nearly everyone of those shows had a single episode in which lying was always bad, even if the protagonists happily fibbed and lied their way through all of the other episodes – what could they have done, given how telling the truth would have gotten them hauled of to psychiatric evaluation by Social Services? But for that one, single episode, every instance of necessary lies was avoided, the moral was ham-handedly delivered, and then everything went back to normal.

So, yeah, if Akuns would have had the luck that this one would turn out to be my “if-live-gives-you-lemons-,-make-lemonade” episode, everything could have worked out for him. Unfortunately, it is just my “if-you-shoot-manta-rays-at-buildings-,-you-will-look-stupid” episode. And that moral is actually mostly accurate, even if seldomly applicable.

I’ll leave it open whether Akuns’ old nanny can be found and given Heaven’s punishment – somehow, I get the feeling that would be one of those close-and-personal acts of cruelty that an audience cannot forgive a villain for.