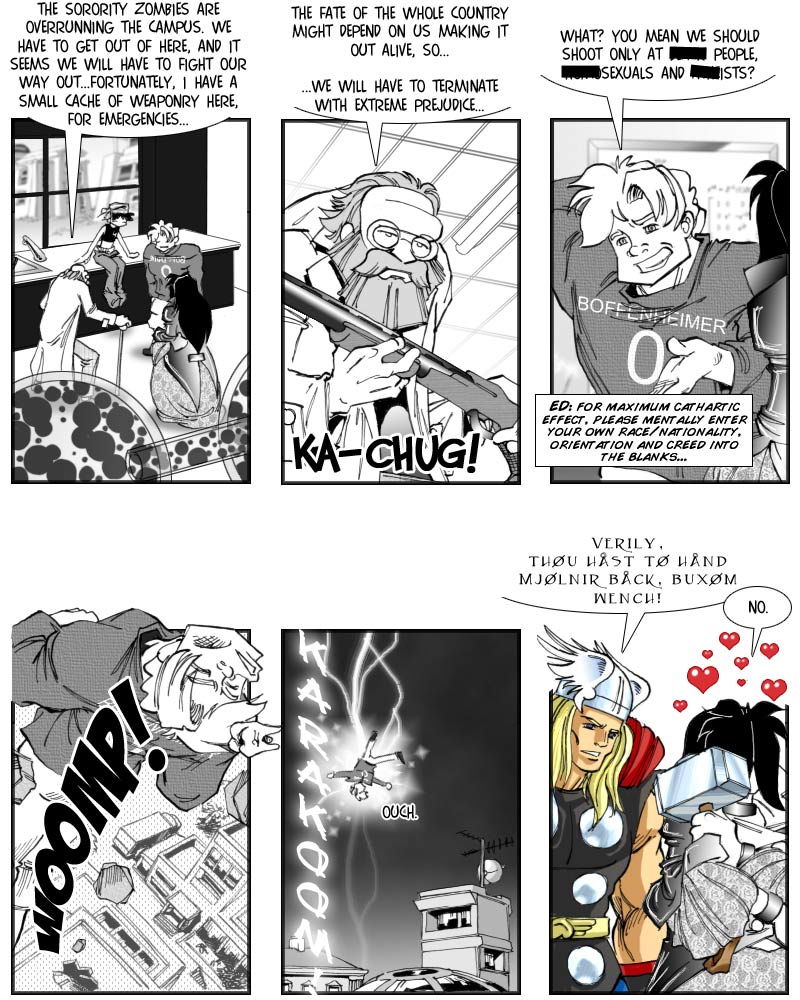 The Professor doesn’t generally support guns on campus, but he has very valid reasons to claim an exception for himself and his lab. Some of his experiments sometimes develop…almost something like a mind of their own, as you could call it. And the Professor just doesn’t want to take any unnecessary risks, in that regard – he is proud to have been named to the von Frankenstein Chair of Applied Anthropology, but that doesn’t mean he’s keen to get chased around by a torches-and-pitchforks-wielding mob of villagers. Additionally, B-movie law requires large amounts of military-grade weaponry to be easily available even in private residences, if the plot calls for it. If the plot calls for the opposite, even military bases are devoid of anything more powerful than a pea-shooter, though.

As regards panel three, I made pretty much the same wrong association when I first heard that phrase – unlike Biff, however, I didn’t grin quite that happily. And I maintain that the phrase is highly misleading. Something along the lines of:“really not caring what you hit” would describe the concept much more clearly. If you feel that the cathartic effect of seeing Biff getting punished for his slurs wasn’t quite enough yet, just read the strip over again and again, while spelling the sound effects out loud. It works.

Mopey, on her part, wasn’t really unhappy with her old standard mallet stored in hammerspace, but she’s definitely in love with her new hammer. The beauty of blunt impact combined with the power of the elements is just a double whammy made in heaven. And it’s not like it was easy getting her hands on Mjolnir, anyway – convincing Loki to help her with that demanded full use of her bodily assets.

…her legs and feet, mostly – Loki has since added an armored codpiece to his costume. And I fear that our favourite blond asgardian (or wiccan, if you prefer =B) has little chance to get his hardware back anytime soon. He’ll probably have to settle for Mopey’s old mallet.

Speaking of that guy, he also features on today’s voting incentive, by complete coincidence. The strip was drawn weeks ago, and the incentive only yesterday – and only when I prepared the update today did I realize how nicely that all lined up. =) More on Monday.