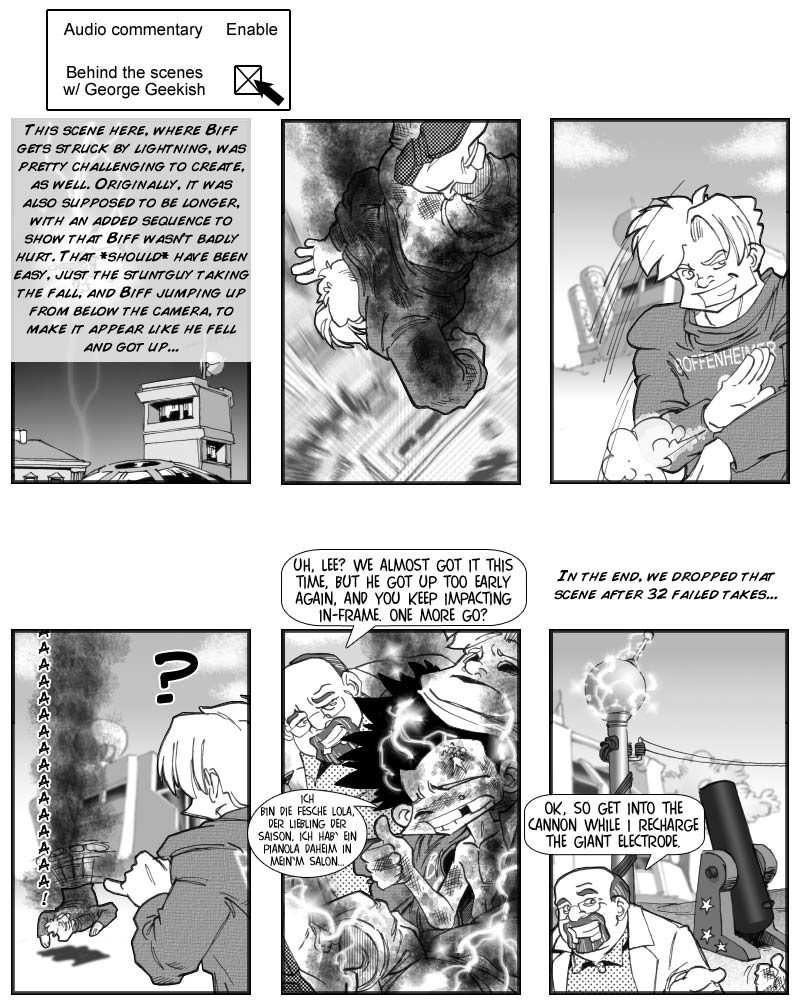 Well, what goes up, must come down. On this production, that goes especially for the stunts – whenever the risks go up, the stunt comes down. On Lee. And comes down really, really hard, at that.

In most cases when you see a character fall down and then jump up again immediately in movies, it is done in the way intended here: A stuntperson takes the fall, landing on a prepared spot behind coverage or off-screen. The actor playing the character had been crouching just below the camera in the meantime, and now jumps up – often dusting off his clothing or otherwise pretending to have just fallen some distance. Naturally, if Elijah jumps up to soon, the take is ruined and Lee has do it all over again…=P

The bit about the cannon and electrode is somewhat of an exaggeration, I’ll admit. But while powerful electrodes aren’t ever really ‘fired’ at stuntpersons that way, they did and do get used for lighting and effects at time. For Boris Karloff, one of the most unpleasant parts of filming “Frankenstein” (which involved lots of unpleasantness for him, from torturous make-up to a back injury) was lying on that frame in the lab-scene, while technicians handled white-hot electrodes high above him, to create the lightening effects. He couldn’t help thinking what could happen if a technician should lose his grip on one of those electrodes.

George, of course, just used an electrode as the most practical way to produce a life-like ‘struck-by-lightening’ effect. (Lee was connected to the ground via a fine wire to make that work.) By that time, he had become thoroughly used to Lee’s …uh…sturdiness. And, indeed, Lee’s brain didn’t end up permanently scrambled. He stopped singing in German a day or two later.

Today’s new voting incentive is based on a news report, again. More on Thursday.