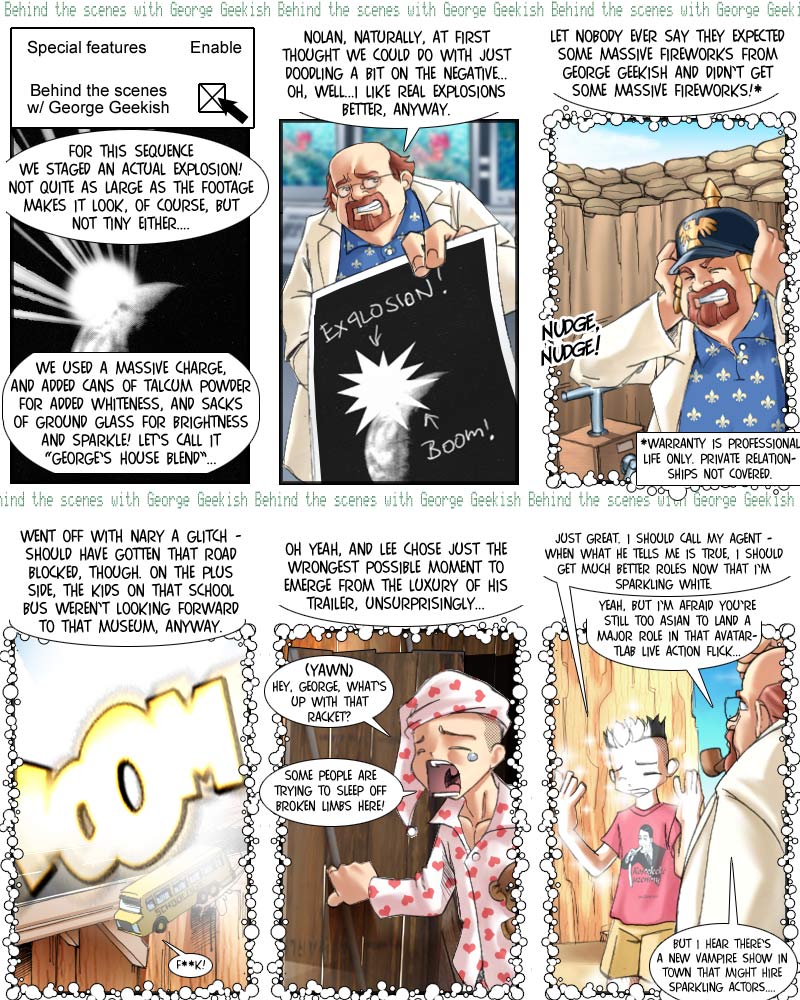 And another complicated effect George has managed to pull off with hardly the tiniest of glitches – OK, save for what happened to that busload of schoolchildren. But, hey, they weren’t cute and fuzzy like hamsters, so I guess nobody will really mind. =P

George’s cynicism regarding that Avatar movie* was justified, I’m sad to report – the best part that Lee got offered was “spearbearer – second rank, third from left”. Although Lee’s agent suggested he should try to always keep the left side of his face towards any of George’s pyrotechnical effects – and in a flash he might yet qualify for the Part of Prince Zuko. The only other thing Lee’s agent could offer to a sparkly-white Lee was putting him down for the remake of “Birth of a Nation” – scheduled to begin shooting when Hell freezes over or Texas secedes from the U.S., whatever happens first.

And Lee’s new coating put a serious damper on his love life, too, unlike the blue and pink colors he had sported previously – but that’s only because…uh…he couldn’t touch himself while his hands were coated in ground glass. >_>

As far as Lee’s remark in panel five is concerned – if you weren’t aware that you can simply sleep off broken limbs, you’ve never met the guy Nolan hired as on-set physician. A Dr. Zoidberg … I guess his last job must have been on that pirate movie, for he looks remarkably similar to Davey Jones.

I’m a bit puzzled by George’s last remark, though – but I think he must simply have misheard something there. Why would a vampire show need sparkling actors? Vampires don’t sparkle, everybody knows that. ._. By the way, I made George refer to “Avatar – T(he) L(ast) A(ir)b(ender)” specifically, because some people seems to think there’s another movie called “Avatar” coming out, as well. I don’t believe that, of course, because that other movie is allegedly by James Cameron, and everyone knows James Cameron will never make another movie.**

*If you aren’t aware what that remark was about, and would like to know, see here.

**Yes, I know that’s not true. But repeating it over and over helps me sleep at night. ._.