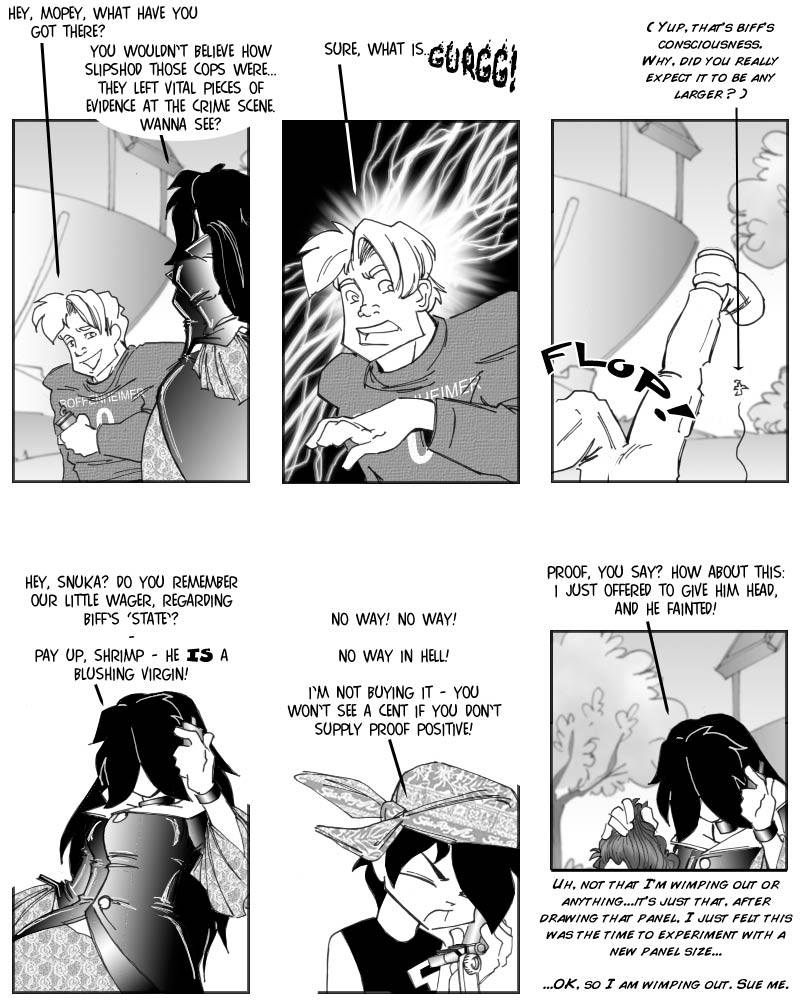 Yeah, so I exerted a bit of self-censorship here. I originally drew the last panel full-size, but when I looked the strip over before putting it up, I suddenly felt it was a bit …uh, drastic. This was, by the way, the first thing I drew after moving, so the aggravation of that whole process might have played a part in this…

There a quite a bit of bets going on between Snuka and Mopey, mostly involving Biff behind his back. Yeah, a bit of bets behind Biff’s back. I love alliteration. Mopey usually wins (thanks to her still outcynisising the kid), but so far, Snuka has lost only money – he still has his soul. What there is of it, anyway.

Mobile phones are a fantastic invention! Not in real life, of course, where they are just a major pain in the a**. But for movies and comics, it’s just the most convenient plot device EVER. You can instantly bring any person into the plot at any moment – no matter where they are. Just have them be called on their mobile…no more zooming around with the Batplane just to have Commissioner Gordon offer up his 3 cents on the Joker’s new hairdo… There’s a small downside, off course – you need to supply some explanation why people don’t use their mobiles to call aid when they run into trouble, and instead try to tackle the army of cyber godzilla pirates (TM) themselves. Naturally, when you are doing a B-class movie or comic, you can simply ignore that inconsistency – it will hardly be the most obvious. Incidentally, if your movie or comic contains any cyber godzilla pirates (TM) it’s probably B-class, to begin with.

Speaking of little inconsistencies, I never have any in my comic. Just happens that all of my characters are ambidexterous, so the fact that they switch between using their left and right hands is pure intention.:P (Such goofs seldomly happen in movies, of course, unless an actor has to feign a ‘handedness’ different from his actual one for some reasons.)

Oh, and one little thing: The ‘Sue me’ in the strip is a joke, as well. Actually, DON’T sue me. Pretty please. And speaking of pretty please, vote. On Thursday, you’ll finally get to see where Mopey lives.

Text: Getting ahead- in the plot, with the plot, it’s all a great cosmic unity of the interior and exterior forms. Ommmmmmm