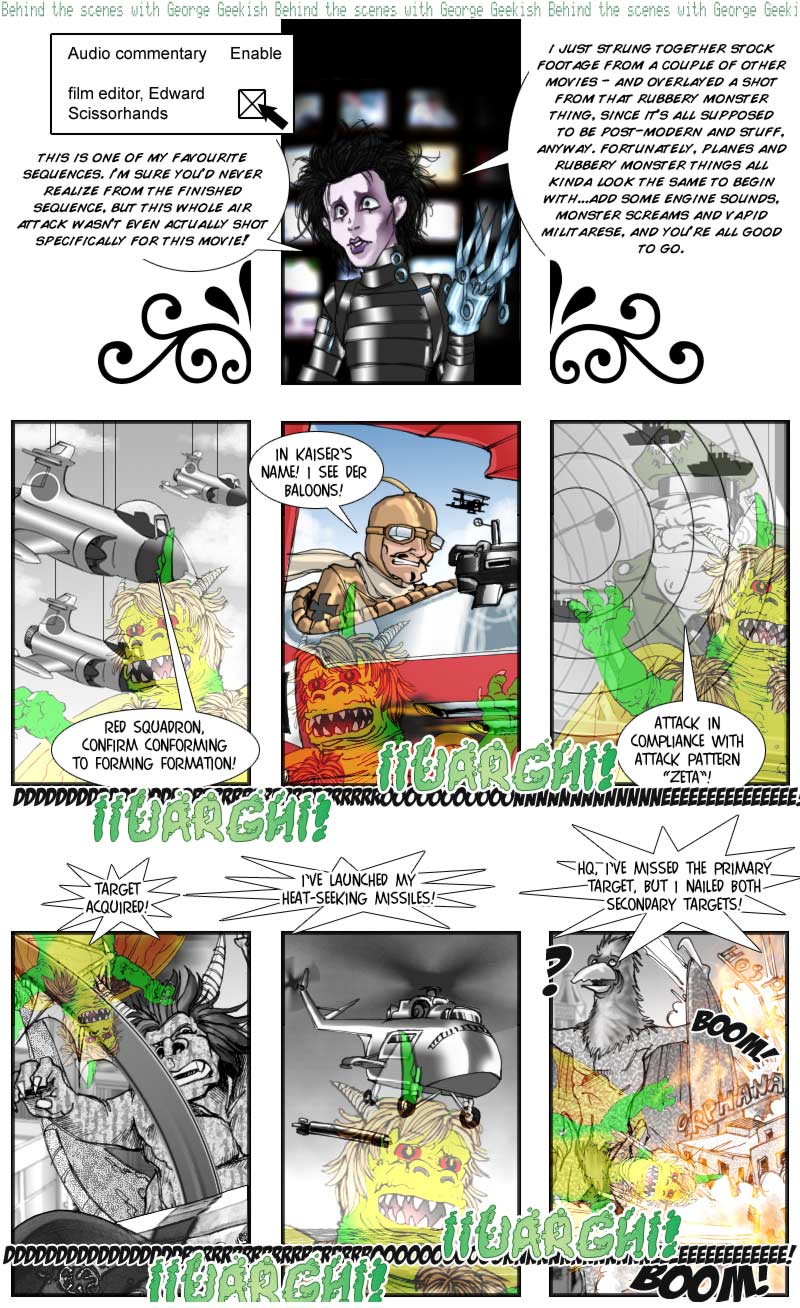 So here we finally get to see another one of the people behind the scenes: Edward Scissorhands, the editor. Looking pretty much exactly as you would have expected, probably – not very original, I will admit, but I just couldn’t resist.

But I think he’s done a very good job on the edit here…it’s really quite… …post-modern. Seriously, though, kaiju movies – especially from the late sixties and early seventies – are practically the dictionary definition of on a shoe-string budget, so re-using stock footage was more or less obligatory. And the air attack sequence always was a prime candidate for it – it was (and is) an almost mandatory part of the formula, and always plays out in the same way: the air attack fails to harm the monster du jour at all, while the attackers tend to sustain heavy losses. The only thing that changes is the type of plane employed, with the oldest movies featuring F-86s, later followed by F-104s and later F-15, and sometimes a combination if the editor thought they could get away with it. While shots featuring only the planes lend themselves easily to such a mix-and-match approach, those depicting the planes alongside the monster are not as readily transferable to a later movie starring a different monster – but, again, sometimes the editor thought they could get away with it for a couple of frames.

Kaiju movies aren’t the only kind, of course, that tend play fast and loose with footage of aircraft – it seems that, in general, if the editor themselves isn’t able to tell different aircraft (from different periods) apart, they simply assume the same goes for the audience, and merrily mix away. After all, there’s always sound effects and re-dubbing to homogenize the results a bit. And as far as the scripts for such re-dubbing go, it seems that scriptwriters are awfully liable to suffer from a strange kind of monomania: Beginning in the fifties, all weapons employed by aircraft would, nearly without exception, be referred to as ‘missiles’ in movie scripts – even if they were clearly bombs. A while later, they all started to be referred to as ‘heat-seeking missiles’ – even if they were clearly shown to be unguided, or fired at a target that wouldn’t have any clear heat signature. By the eighties, they branched out into two different flavours: all weapons used by planes would now be called either ‘Sidewinders’ or ‘Mavericks’ – designations of actual missiles, but generally used indiscriminately. And then there was the helicopter which could shoot artillery rounds, but let’s not even go there….

Anyway, I think it goes without saying that the air attack depicted here will have the standard result – nil – so our heroes will still face their super-sized little problem on Monday. The newest voting incentive features Snuka.