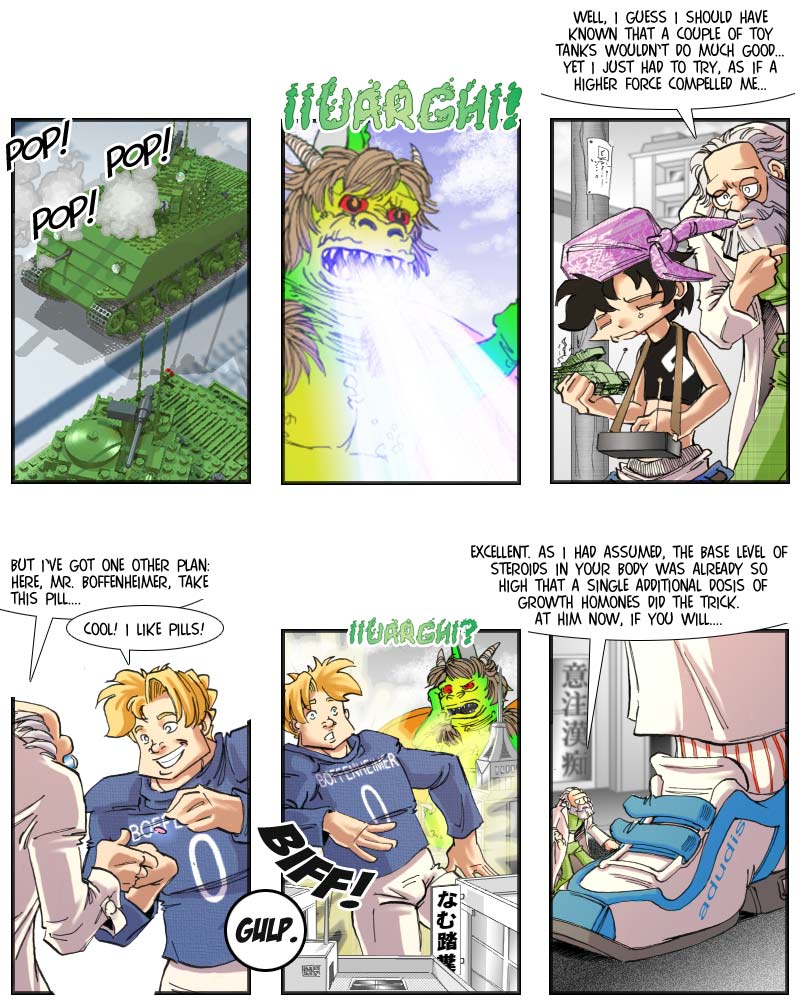 The attack of the toy tanks is another must-have sequence in every self-respecting* kaiju flick. Classically, this is done with a mixture of tank models moving on tracks and stock footage of Japanese SDF exercises. As with the air attack, the only major variation is the vintage of the equipment used – every generation of equipment used by the SDF ended up being used for such sequences, sometimes reinforced by more futuristic fictional energy weapons. In another parallel to the air attack sequences described earlier, the attack of the toy tanks also always ends in complete failure and most often in the complete loss of the units involved. It’s a preferred way to show of the monster’s ranged attack, which can be breathing fire, nuclear steam or lightning, or various types of rays shot from eyes, horns etc. – but independent of the actual nature of that counterattack, the effect always tends to look remarkably similar to a toy tank being melted with an acetylene torch…

The reason the Professor felt compelled to attempt that kind of attack, despite doubts of its effectiveness, is probably some kind of subliminal suggestion brought on to continued exposure to tediously repetitive kaiju movie plots. I sure would do it in that situation, as well, out of an overbearing feeling of appropriateness… I’d even know the proper attitude to deliver the order: with a very stern, earnest expression and a terse “hai”. (In answering a subordinate’s question, that is – in movies, such orders always require the nearest subordinate to repeat them/ask for confirmation, to further clarify the graveness of the situation.)

As far as panels four to six are concerned, perhaps I should point out that I originally created this episode long before the Warren report came out…it’s just that everybody knew it, anyway. XD Biff, of course, really doesn’t know what those pills and injections the coach supplies him with actually are, so he would reject the notion that he is taking illicit substances with a clear conscience. But of course only after looking up “reject”, “notion”, “illicit” and “conscience” in a dictionary.

Another note on panel four: Originally, the Professor’s lines referred to his other plan as “Plan B”. I changed that only today, after reading over the strip once more and realizing how odd it could appear, from a certain perspecive, to see the Professor supply Biff with “Plan B pills”. It could have let to serious confusion, or perhaps even mpreg fanfiction. XD

OK, now that Biff has ‘biffed up’ sufficiently, we can have a proper humonguous monster fight on Thursday.