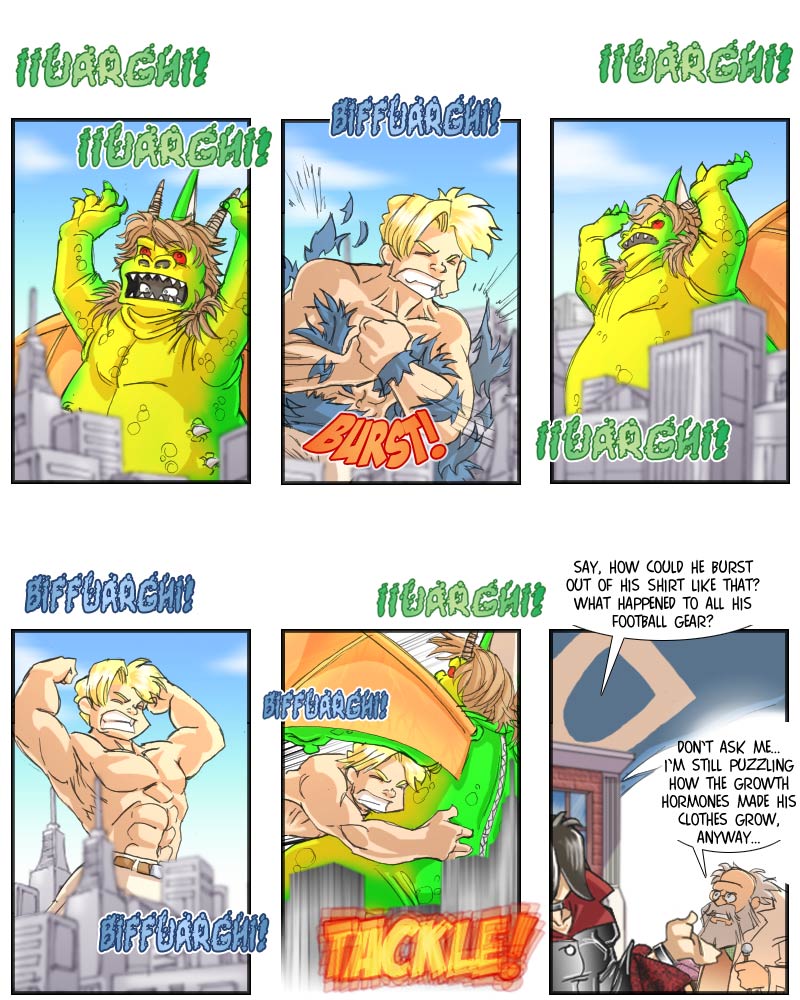 After the giant menace in a kaiju movie has survived, unharmed, the various flavours of mini-military equipment thrown in its general direction, the issue tends to come to a head with an epic confrontation between said giant menace and humanity’s similarly giant defender (du jour). This massive battle traditionally start of with staredown/intimidation contest – well, mostly it comes down to two guys in rubber suits jumping from one leg to the other and waving their arms around. Since, as mentioned, movement tends to be restricted severely in such monster suits, the result usually could be charitably described as a cross between “symbolically threatening” and “Look, new hip joint”.

Tom: “Look at Gamera, he’s dancing go-go!” Akio: “No, he’s trying to get rid of those metal things in his arms.” from “Gamera vs. Guiron”

The camera usually alternates between the two opponents for these sequences, and also between different angles, desperately trying to give an indication of scale without lingering too long on the building models. Naturally, both monsters will utter their respective trademark battlecries repeatedly, often in a kind of answering/echoing format. And, as naturally, the intimidation tactic will fail as miserably as any other tried earlier in the movie, and fighting will prove inevitable.

A reader kindly reminded me, rightfully, of the Shatner-effect: the first casualty in a climactic confrontation is always the hero’s shirt. A sufficiently hunky hero might simply burst it off by flexing his muscles, others might tear it off Hulk Hogan-style or have it torn off by his opponent, but go it must. I’d say Biff still counts as hero despite momentarily also being a giant monster, so this applies.

Trousers, of course, never get torn off that way, even if the person wearing them goes skinny nerd to Mighty Hulk in a(n accelerated) heartbeat, utterly obliterating every other part of clothing in the process. Knowing Marvel, the official explanation for that probably involves either ‘unstable’ molecules or a pocket dimension. I think I’ll be lazy and herewith officially declare that the mysterious growth of Biff’s clothing is due to the same effect, whatever it might turn out to be.