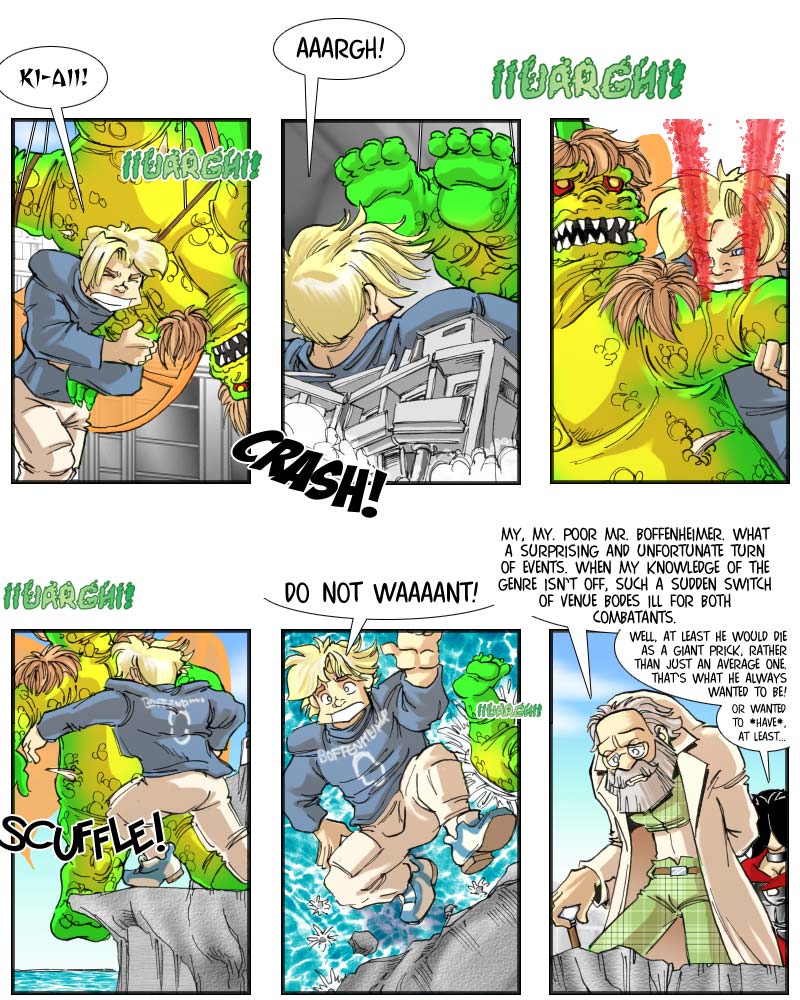 Professor Dr.’s one semester of studying mythical beast physiology and general kaijulogy under Professor Honda in Tokyo definitely wasn’t wasted, for his observation is quite correct: under all the various standard kaiju fight choreographies, the one variant that has both monsters fall off a cliff is one of the least auspicious for everyone involved.

Aside from the cliff thing, this fight also covers a few other kaiju fight classics:

– monsters throwing each other around. A webcomic can’t really do that one justice, since the funniest thing is the slow speed at which that happens, thanks to the limits of doing wire stunts with people in styrofoam-and-rubber suits.

– monsters falling on buildings, crushing them. Ouch, I bet that’s not the suitmation actors’ favourite.

– monster shooting fountains of blood from wounds. Probably consciously exaggerated so the audience takes note that a monster has been seriously hurt – or “seriously”, since it usually doesn’t really make any difference (in fact, the monster being hurt like that more often winds up winning the fight, rather than losing). This trick can also be used to reinforce a monster’s “alien appeal” by showing that its blood has some unnatural colour.

Panel five demonstrates that Biff keeps up with current trends – the more classic thing to shout when falling over the edge of a towering cliff would have been “NOOOOOOOOOOO!”, but “Do not want!” has been steadily gaining in popularity. (Probably because EP. III is actually better with those subtitles. Erm.)

Before we get to the dramatic conclusion of this titanic struggle, Thursday’s episode will offer another peek behind the scenes, explaining how this spectacular episode was created. (And also explaining, in case you wondered, why Biff is wearing his jersey again, which was utterly destroyed earlier. =P) For even more of Giant!Biff, check out the new incentive.