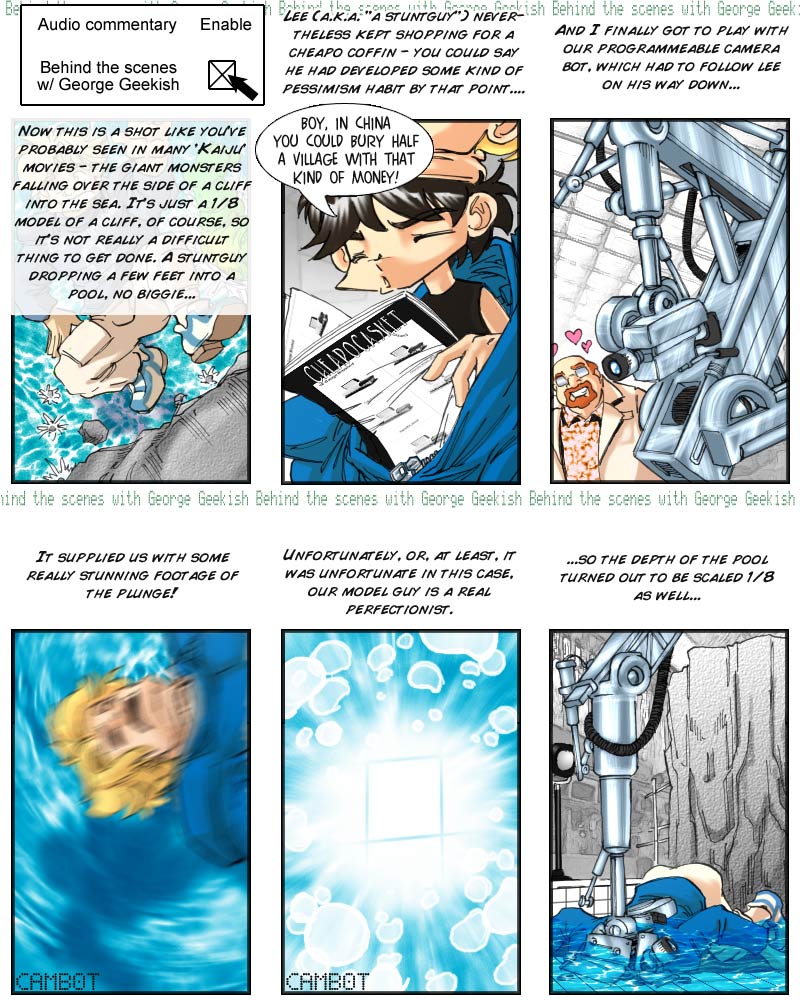 So here’s, as promised, the explanation for Biff’s switching between various states of undress: The shots that were only about posing were done with Biff’s standard actor, Elijah, but once the action got underway they had to use a stuntguy for insurance reasons. (That reason being that Elijah is insured, and Lee isn’t. See also under‘budget priorities’) Elijah can’t yet move very well with his new chest muscle implants, anyway.

Getting good-looking ‘falling’ footage can be a bit tricky, of course – I’ve heard of at least one case where they just dropped a rolling camera off a cliff-side, hoping that the filmdrum would somehow survive it. But such a conscious sacrifice of valuable equipment is far beyond the means of a B-movie’s budget, normally, therefore the cambot (not that the camera actually *did* survive, but it was certainly supposed to). The cambot is one of George’s favourite new toys, and by far the most expensive piece of equipment owned by that production company – it’s a Romanian model from the late sixties, and they paid a ’89 dodge with a trunk full of cigarettes for it. It’s a bit heavier and bigger than contemporary models, but at least it’s durable and reliable. Once you figure out how to operate it, that is, which took George a moment or two or a month – the manual consisted of two pages, mechanically typed, with one of the pages mostly obliterated by coffee stains, and all of it in Romanian. But since he got the hang of it, he’s really pleased with the device…it moves a bit jerkily, at times, and it takes some time for the steam in the boiler to build pressure, but still…not bad for a B-movie.

1/8 is not necessarily an uncommon scale for movie models, but I guess it’d actually be much too large for a kaiju movie, where you want to have a normal sized actor dwarfing buildings – but I didn’t want Lee to impact *too* hard. XD

Well, now you know how the monster fight scene was created – and next Monday you’ll have a chance to see how the fight actually ended, and what happened to Biff. For more of Snuka, check out the voting incentive.