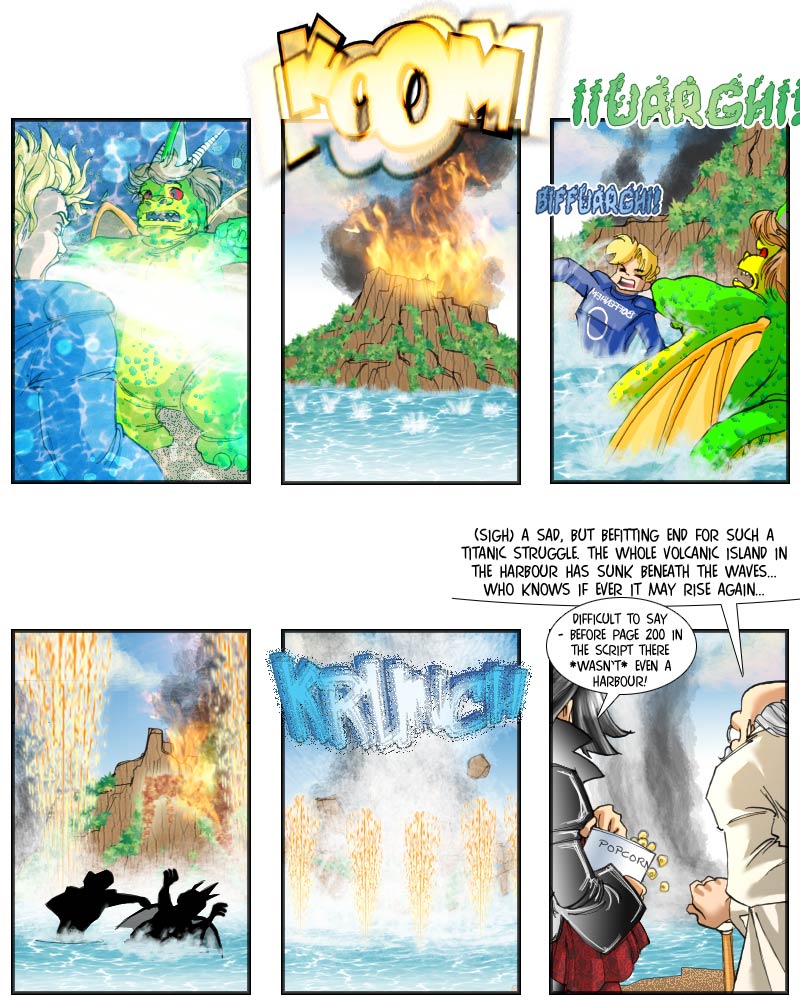 And this is, indeed, another kaiju movie classic: the disappering island. In this endgame variant, the two giant opponents are locked in mortal struggle in an aquatic enviroment (kaiju never need to breathe, apparently, inrespective of their reptilian/mammalian/insectoid nature) when a nearby volcanic island suddenly violently erupts. At the simultaneous climax of said eruption and the ongoing kaiju confrontation, the island will disappear below the waves forever, dragging the two opponents with it to a watery grave. (If one of the monsters gets resurrected for a sequel, it can simply reappear out of the ocean or a mountainside anywhere on the world – under the assumption it traveled there either through the water or the streams of magma below the Earth’s crust, apparently.)

The FX for the eruptions is usually done with a model island, beefed up with waterspouts, sparklies, smoke and all kinds of pyrotechnic effects. For the high-end variant, that is – the low cost alternative is basically a baking soda volcano of the show-and-tell kind (and if the high-end version is used, the footage will be re-used in at least two further movies). Generally, this natural disaster will receive at least as much, often more, screentime than the actual monster fight. But then, Japan consists of a chain of Islands bordered by a major tectonic fault – I guess that makes that kind of footage more effective for them than it is for an inhabitant of a major landmass.

In most cases, there is no definite explanation whether the eruptions were somehow caused by the kaiju confrontation (via the weight thrown about or the gratuituous use of energy beams/breath) or just coincidentally/on fate’s decree occured at the exact same moment. The fatalistic theory, however, receives some support from the fact that the volcanic island and its surrounding sea seemingly can pop up wherever needed, even if the script never even alluded to the proximity of the sea earlier.

That’s it for today – on Thursday, our three surviving friends will push on towards their target. To add a hint of class and appropriateness to today’s new voting incentive, it features Sam the Eagle.