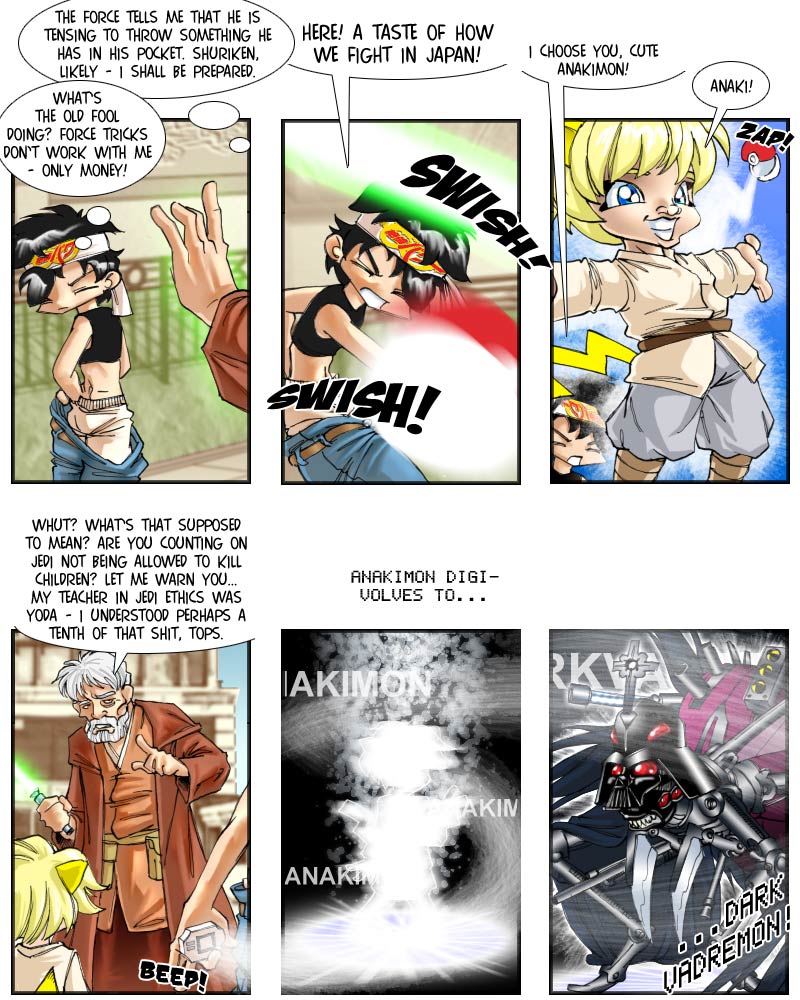 Snuka’s master is a little bit old-fashioned, in some regards…he thought the Japanese kind of fighting would somehow involve such quaint relics as swords and shuriken. Snuka, however, has learned his lessons from the earlier incidents involving his anime blade – no more traditional weapons for him, he switched to more contemporary fighting styles. The mon style, as demonstrated here, involves summoning deceptively cute, if utterly nonsensical being to fight in your stead. (His alternative would have been the collectible style – that one involves playing a game of cards while summoning monsters, and lots and lots and lots of Expospeak. I thought the mons would be funnier.)

And I just had to go on picking on Yoda…I hope it’s okay – it’s not because of his height, I promise. But I just can’t begin to see how somebody speaking exclusively in hollow platitudes, and all of them grammatically massacred in the most cruesome way, could be an effective, let alone celebrated, teacher. I bet when some other Jedi teacher took over a class from Yoda, they just started covering all the material all over again, certain that nothing Yoda had taught would have stuck with any of the pupils… It explains a lot, actually, regarding Obi Wan…with all of his tortured apologetics, “I told you the truth – from a certain point of view” and all of that, he definitely comes over as someone who might have a vague concept of right and wrong, but still missed out on a crucial chapter or two in his ethics education…

As for the last two panels…that digivolution from Anakimon to Dark Vadremon would be my private plot proposal for Episode III. I think it would make the character change appear much less unmotivated and contrived than it does in the original. =P (And in his commentary track on the Ep. III DVD, George Lucas even states that that version is already a re-edit, and that the original edit would have had an even more sudden switch for Anakin…I can only imagine that it was planned for him to passionately kiss Padme, declaring his everlasting, tender love for her – then turn around and decapitate some youngling on the way out the door while laughing giddily…)

And, yup, this has been the first and hopefully final ever BMC/Star Wars/Pokemon/Digimon mess-up episode. Don’t worry, though, the whole thing should be wrapped up for good by Monday. New voting incentive is up, as well, even cuter than the last one. =3