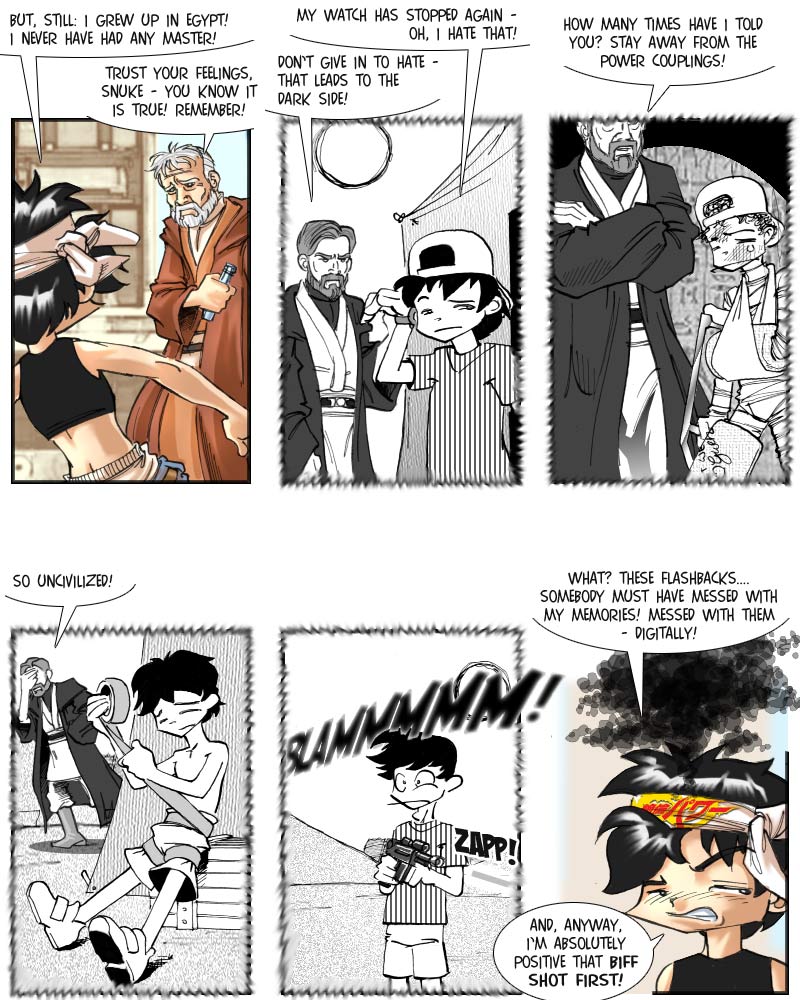 That kind of retroactive digital meddling is annoying enough for a movie’s fans – but just try to imagine how disturbing it must be for the characters! Realizing that you suddenly remember things that you know didn’t happen must be terribly disturbing, especially if they then go on to retroactively hold profound emotional meaning for you.

I guess this also explains why some comic characters are such tormented souls – take Batman, for example. After decades of constant ret-cons, he probably stumbles through life plagued by foggy visions of his parents being killed by serveral different, mutually exclusive, villains, as well as vaguely recalling specific events involving several partners called ‘Robin’ he hasn’t even had. I bet by now he’s down to randomly calling the people who mean something to him, just to make sure they’re still alive – or ever have been.

In any case, the slight retroactive modifications I’ve done here are completely justified, artistically. Snuka’s master has always been in the script for chapter one, trust me. We just didn’t have the budget to realize that vision at that point (those jedi cloaks are very expensive), so the artistic integrity of these scenes is now actually higher than before. And Snuka shooting back is very important for Biff’s correct characterization – in the original version, he came over much too cold-blooded. In fact, all of BMC has been carefully scripted in advance – in three arcs of three sets of three trilogies each. Trust me, that script exist, I just keep it in a hat for…uh…artistic integrity reasons. Anyway, all the little inconsistencies you think you’ve noticed aren’t actually inconsistencies at all, but all hints of the greater plot that will gradually surface over the next 79 parts. Trust me.

(If it’s any consolation, however, I haven’t really gone and changed the affected panels on the original strips in the archive. They’re still as they’ve always been, in case you care to compare: )

If you wonder why Snuka’s headband suddenly has the knot on the side, that’s just because I screwed up the order of the episodes. This one was actually supposed to run before last Thursday’s one. When I realized that it got skipped, I decided it might still work running them in reversed order – if only I replace Snuka’s bandana with the headband. So the knot actually belongs to his bandana, as originally drawn, with the rest of it being slightly retouched. =P

This should’ve been the last episode of pre-combat niceties, though, and the confrontation will start earnestly on Thursday. A new voting incentive is up, as well.