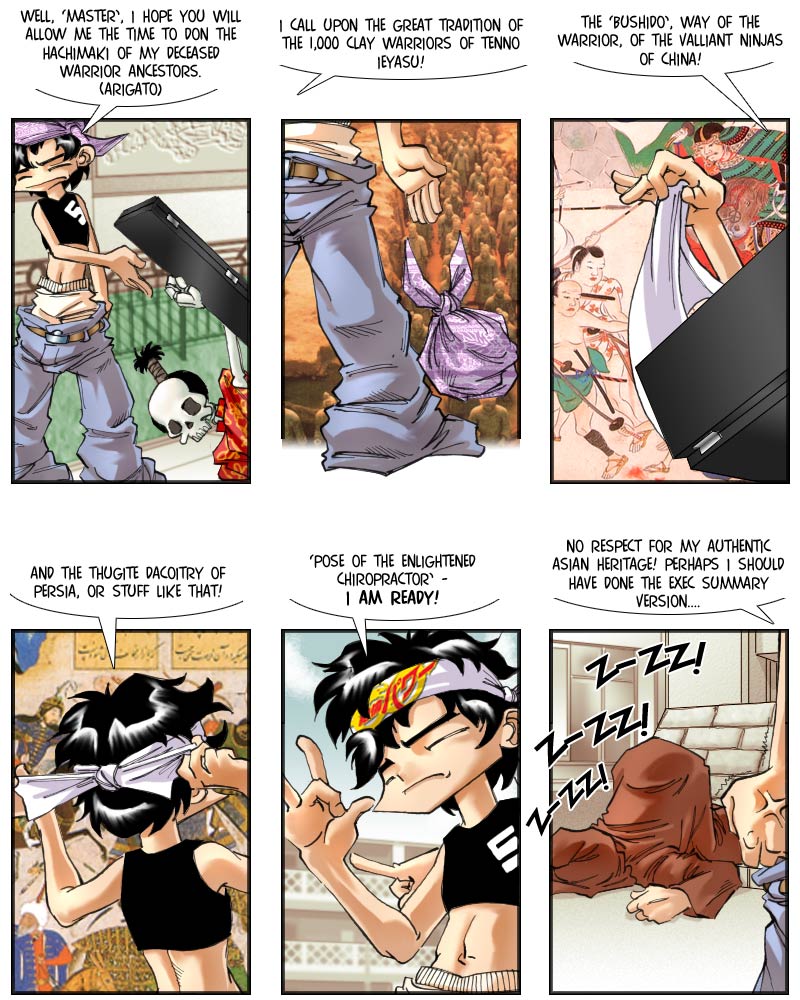 And once again Snuka demonstrates that, true to B-movie traditions, his approach to his Asian heritage is based on mix-and-match – with the ‘match’ part being mostly optional. Consider it a little hommage to Sax Rohmer, whose Asian supervillain Dr. Fu Manchu,despite supposedly being a Chinese nationalist, relied on a network of henchmen and supporters drawn together from all parts of Asia and the Near East: Indian highwaymen and cultists, Burmese, Mongols, Turks, even Palestinians – all of them loyally served the Devil doctor’s (apparent) goal of a unified Asia under Chinese control. But no, Sax Rohmer was no super-pan-Asian visionary – the reason for Fu’s non-discriminatory employment policy was far simpler: Rohmer had travelled the Near East and India, and found some success as a writer of “oriental” mysteries based on those regions – so when his editor specifically requested a Chinese villain for a story, and Sax knew far less about China, he simply surrounded his freshly created villain with henchmen of the kind he could more easily base on his knowledge and experience.

Donning a headband before a (literal or figurative) struggle of any kind is a somewhat authentic Japanese tradition, but in movieland it has long since turned into a cliche – and one no longer limited to Japanese or even just Asian characters, but gleefully applied to characters from all over the world, especially those considered to have a ‘philosophical’ or ‘spiritual’ approach to combat. In Hollywood terms, that means all characters who don’t just jump into the middle of combat and start massacring aimlessly – but hesitate for a moment, then jump into the middle of combat and starts massacring aimlessly. Normally, the actor playing such a character will accompany the moment of hesitation with an expression of subtle, repressed emotion – generally referred to as the mild constipation look. (Not to be confused with the wild constipation look, which is reserved for scenes of more serious emotional tourment – although Rambo gets to combine donning a headband with wild constipation every time.)

Today our special guest skeleton, as featured in panel one, is Snuka’s 16th century ancestor, Takeru Snukuraba, who was famous for his “two swords technique”. With it he could steal swords from two people at once…. He was what would normally have been referred to as a ronin, but the other ronins protested against that…so he was generally referred to as a zurui chibi.

About Snuka’s master just falling asleep…well, it’s not just age, it’s also that his ability to fall sleep everywhere and everywhen is a skill his own master, Yoda, taught him… …well, perhaps not really taught him as such…Let’s say he picked up the habit during Yoda’s lessons. Especially Yoda’s course “Jedi History 101” – the final lesson of that course had all the verbs of the whole semester. (Yup, Anakin Skywalker did not really kill those younglings – they jumped into his lightsaber willfully, to put an end to their terrible suffering at the hands of the most boring and confusing teacher ever…) Anyway, Snuka’s master can get back to alertness as easily and quickly as falling asleep (especially since he didn’t even bother to take his dentures out), so the fight will start for real on Monday. (New voting incentive, too.)