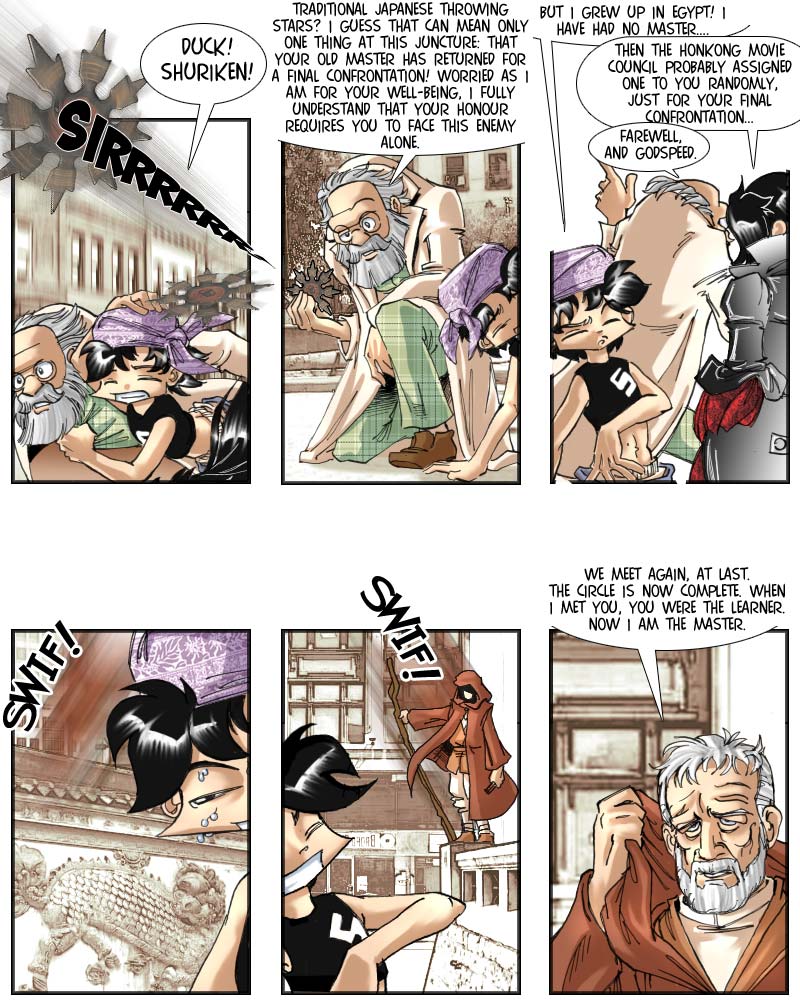 So today Snuka has to pay the price for the martial arts skills that came with his vaguely Asian origin. As an Asian character, he gains several levels of martial arts by merely existing, but as a martial arts adept, he cannot avoid running into a certain type of climactic confrontation at some point: For every fictional martial artist has to face, sooner or later, either his own master, or the person who killed their master. (Only exception: characters who have their own father or elder sibling for an arch-nemesis…but that tends to turn out worse, anyway…)

Snuka thought he had cleverly averted this trope by just not having a master…but he hasn’t counted on the Hongkong Movie Council, who keep a small number of spare masters on hand just for this kind of emergency. I wouldn’t recommend relying on that service, however – naturally, these spare masters aren’t top-grade material…many of them have been outright failures mastering around on their own, and often have lost their pupils under dishonourable circumstances. So if you can afford it at all, make sure you have your own master around when your time draws near…

The kid’s still in luck, though, that he got the “fight your master” scenario over the alternative, the “fight the person who killed your master” one. In the latter case, the master’s killer tends to beat their opponent into a bloody pulp at the first encounter, and still senseless at the second, and will succumb only in the third or a later, after some incredible difficult extra techniques have been acquired…those that really enjoy their work might even mutilate/castrate/blind the pupil, especially on Mondays… But Snuka only has to fight his master himself, fortunately, so he’ll probably just get beaten to within an inch of his life. Plus/minus two inches.

Speaking of Masters, and since I just had to think of Obi Wan Kenobi for no particular reason…when I typed the text for panel six, I realised that the similar remark Kenobi makes to Vader when they meet in Ep. IV doesn’t *sound* at all like referring to the things we saw at the end of Ep. III – there’s no direct contradiction, but it just doesn’t fit properly… (I have just noted that, funnily, Snuka’s master actually bears a passing resemblance to Kenobi. Tsk tsk, such a coincidence…he’s obviously much smarter, though – he seizes the high ground at the *start* of the fight. =P)

Mopey and the Professor might come over a bit callous, leaving Snuka to fend for himself like that…but they know that there just isn’t anything they could do. The needs of the narrative rank higher than the desires of puny mortals…

If you need proof that ninjitsu has become part of fiction establishment, just look at the fact that the thing happening here in panel two no longer happens in movies. For decades, whenever a character mentioned shuriken, they or some other character had to follow it up with the remark “traditional Japanese throwing stars” as blatant exposition for the benefit of the audience. By now, scriptwriters seems to have accepted that everybody has already heard about those things.(Not that the type of shuriken used in movies, and the way they are used, has anything to do with the traditional weapon, anyway…)

More of Snuka’s final fight on Thursday. A new voting incentive is up, as well.