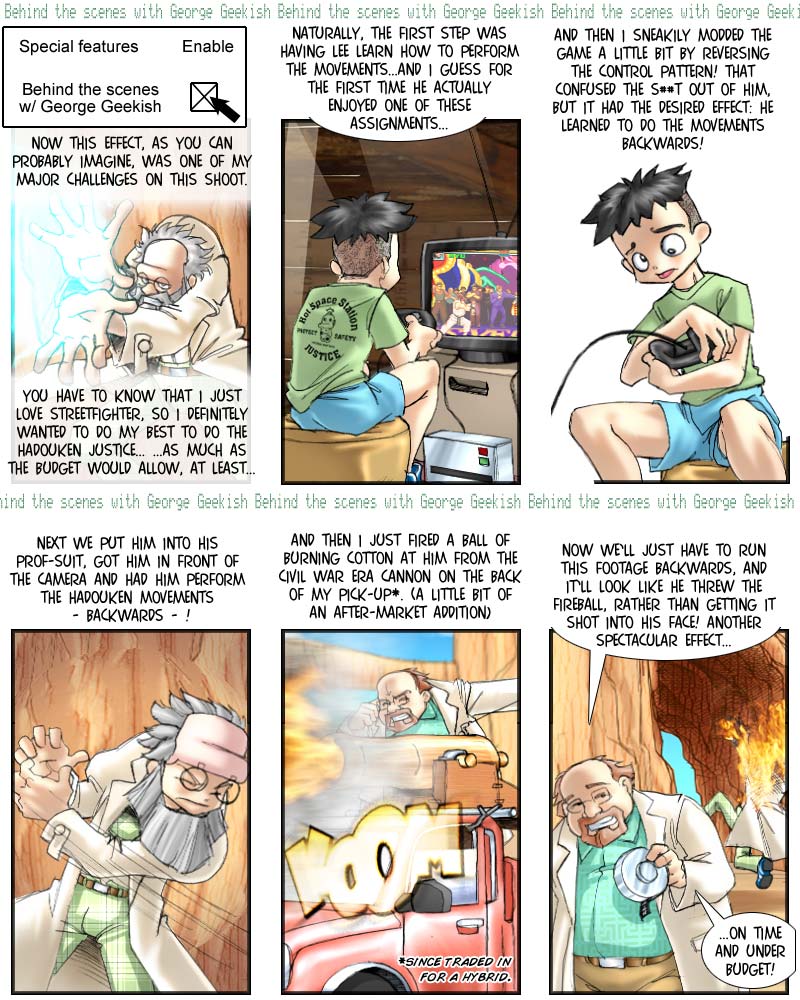 In his neverending quest to produce expensive-looking effects with little money, George Geekish fell back on one of the classics, here: reversed footage. With this little trick( known since the late 19th century) model ruins can rebuilt themselves into model castles, fallen leaves can float upwards and reattach themselves to a tree and Benny Hill can slide up a banister. The only real problem occurs when there’s an actor in the scene which is to be reversed – because in that case, they will have to learn to perform their movements backwards, and it’s not easy to create a fluid, natural-looking motion that way.

No problem for George, though. Everyone knows how strongly videogames can influence the behaviour of kids*, so he immediately realized he would only have to make a few slight alterations to Lee’s cartridge of Street Fighter to helplessly brainwash him into being able to flawlessly perform the Hadouken backwards.

Cost considerations prevented him from going for CG for the fireball effect, but he managed to produce a sufficiently believable effect through conventional means. Good thing he had gone for that little extra for his pick-up truck. (Of course it’s fully legal. All he needed was a permit from the local Sheriff’s department – and is it really surprising that Sheriff Ketchum would find nothing amiss which an item as mundane as a 12pd Napoleon on somebody’s car?)

All in all, another milestone for George – a great effect at an unbeatably low price. And even that was mostly paid by Lee. (Speaking of Lee – Yup, that’s the interior of his trailer in panel 2, and his ‘furniture’. The game console he built himself, from parts scavenged from the landfill. ._. )

That’s it for today, plus a new voting incentive, and more on Thursday.

*Remember when everyone knew that smoking was good for your health?