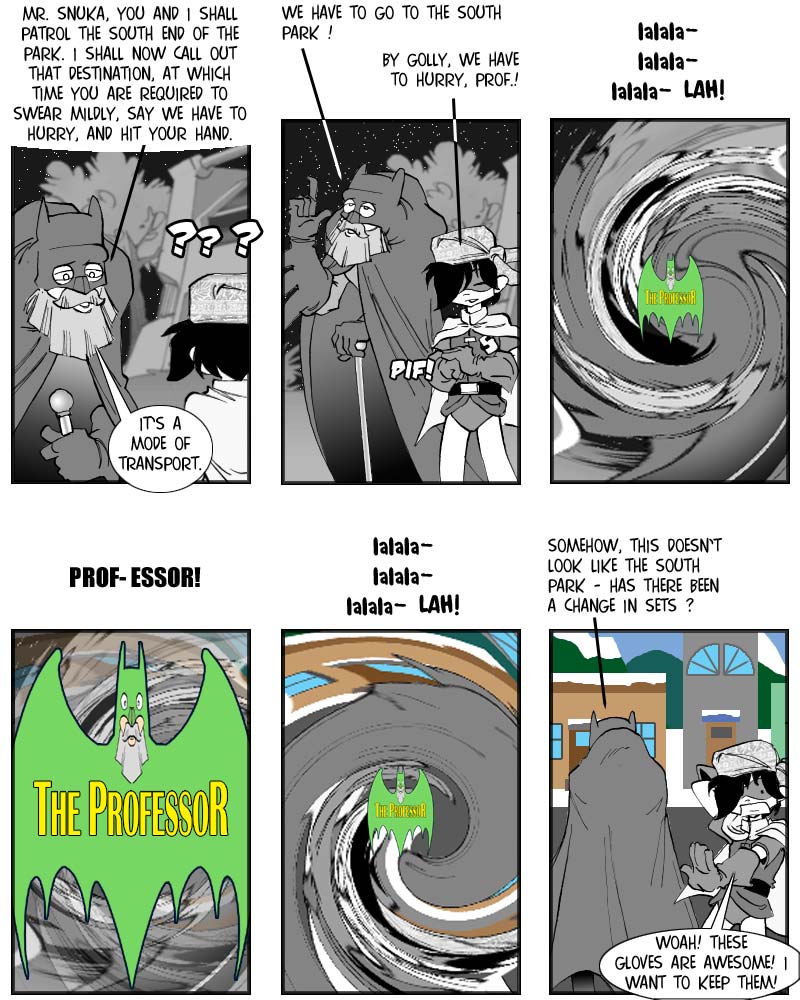 That was another thing I noted about Robin’s gloves in the 1966 TV Series: in addition to the SFX generator, they seem to also have contained some kind of teleportation device. This feature was triggered by a little ritual, which worked as depicted above: Batman said where they had to go, Robin then confirmed that with mild invective, and triggered the teleport by hitting his palm with his fist.

In fact, Robin felt he had to confirm nearly everything Batman said, anyway…

Batman: Where’s the bathroom? I have to go, badly. Robin: Holy urinal calamity! You have to hurry, Batman!

Obviously, Batman had some self-esteem issues, otherwise he wouldn’t not have needed the constant reassurances. Come to think of it, if he hadn’t needed the constant reassurances, he wouldn’t have needed Robin at all… Or perhaps the producers felt that it was necessary. Adam West’s attempts at giving an air of earnestness to the Batman character resulted in his using a rather monotonous, droning tone to deliver his lines, and perhaps that’s why the felt everything had to be repeated by Robin in a more lively way – because young viewers are conditioned to stop paying attention as soon as somebody sounds like a teacher. Still, Kudos to Adam West – with some of the lines he was given, it was a major achievement that he could deliver them straight-faced at all.

In a valiant attempt to test the limits of brand recognition, they used various gaudy colours for the batlogo in this animation – red, orange, pastel green. Yup, pastel green – the colour everybody naturally associates with creatures of the night, crime, revenge and vigilantes.

All in all, I think I understand why Cesar Romero liked working on that show so much – his role mostly required laughing, and, considering the show’s standards, that must have come rather naturally to him. (By the way, The Joker could also teleport: He triggered the effect by making a funny face into the camera while announcing Batman’s upcoming demise. He didn’t get his own logo, though.)

On Monday, we’ll catch up with the other half of our hero quartet again. Please vote.