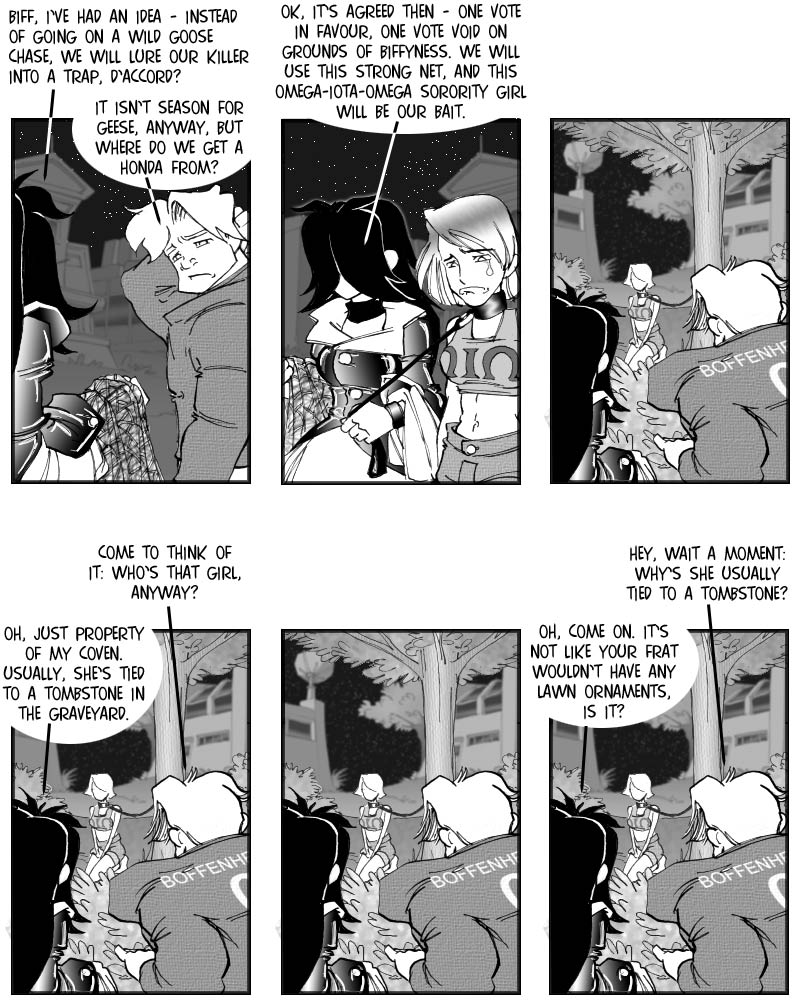 Just a quick update on our Team B, the four-fisted, one-brained one. (Disclaimer: ‘B’ is not intended to insinuate any inferiority as compared to Team A. Even if Team B *has* Biff.) Actually, Team B has more like one brain, two fists, and a pair of heavy goth boots with ‘Crotchcrusher'(tm) steelcaps.

To avoid any misunderstandings, ‘Biffyness’ is not a legitimate reason to void votes in a Federal election. Unfortunately. (In fact, it doesn’t even prevent you from running for office.)

There was some heated discussion within Mopey’s coven when somebody suggested the garden ornament thing…some said it would run counter to the whole point of having a dark magic society, but in the end, the majority thought it would make the graveyard appear…uh, livelier. (It looked kinda dead before that.) And it’s not really any more macabre than what Biff’s frat has on their front lawn…they have a bunch of garden gnomes, but after a month, most were lacking their heads. Which happen to occasionally pop up in the strangest places.

On a technical note, this strip is considerably shortened. If I would have wanted to allot adequate space to Biff’s thought processes, I would have had to repeat panel 3 four more times. (And it’s not like I haven’t gotten enough mileage out of that pic, already. 🙂 )

Thursday, action will switch back to the A-team..uh, no, I mean Team A, foo’, which got stranded on foreign territory. Please vote.