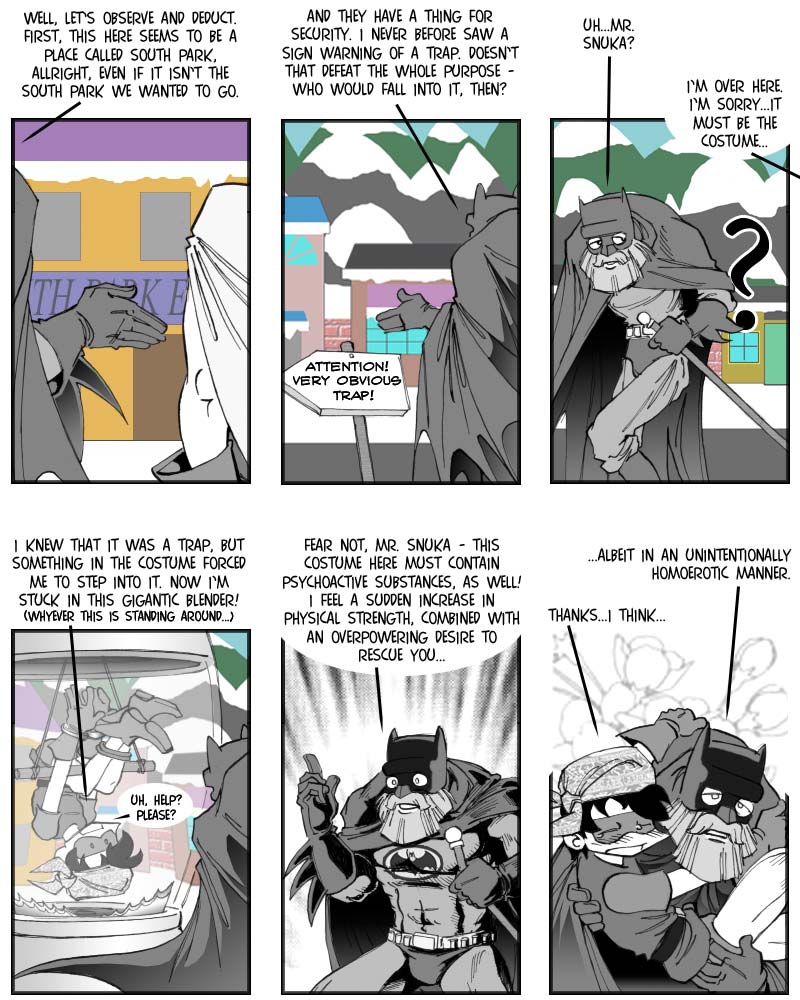 So here we are back with Team ‘A’, stranded in some fictional place which has no intentional resemblance to any actual place…nor any other, possibly copyrighted, fictional place, of course.

“Clothes make the man”, as Mark Twain correctly observed, so I guess it’s to be expected that such legendary costumes (legendary iconic in the case of Batman’s, legendary tacky in the case of Robin’s) as these would somehow influence the wearer’s behaviour. In any case, Snuka pulls a typical Robin here – for that’s the answer to the Prof.’s rhetorical question in panel 2: Robin would. There’s no counting the number of traps that Robin (in all his incarnations) has fallen into since 1939, but the total number is probably 100% of the number of traps available. He literally went (and goes) out of his way to fall into traps, and their being obvious just saves him the trouble of going looking.

Many of the traps would have been awfully hard to overlook, anyway – given that they consisted of giant somethings. Gotham seemingly had giant somethings on every corner – giant statues of ordinary members of the public, giant pool tables, giant blenders, giant catapults for flipping giant coins…

Usually, the writers offered no explanation for the existence of these absurdities, and if they did, their default one was: “Mr.X got famously rich by doing Y so he built this giant Z as a memento of his humble beginnings.” Which makes me kinda hope Anna Nicole Smith will win her lawsuit, just to see what she’ll put in her frontyard in a giant version.

Nuff’ said. On Monday, back to Team B. A new voting incentive is also up, featuring another moment of glory for Ron Weasley from Goblet of Fire.