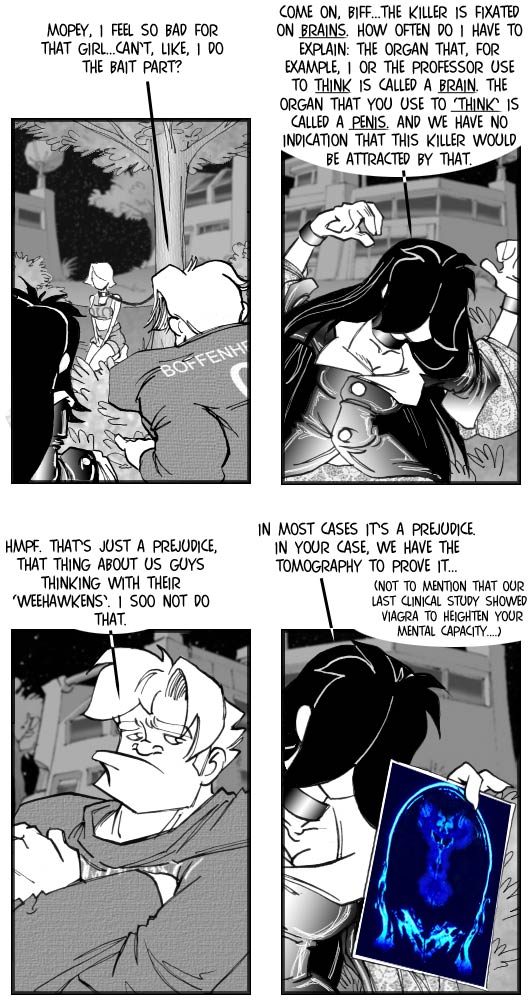 And here you thought Mopey was stating common female prejudices, when all she did was giving scientifically proven facts. By the way, ‘male cerebral penis syndrome’ is considered the defect which is the easiest to spot on a tomography, and thus is often used for exams. Memorize the pic in the last panel, and you’ve got ten credits in the bag already.

In addition to the proof supplied by tomography, Biff also displays the typical behaviour of someone afflicted with MVPS – courage, as shown in panel 1, and the inability to use the proper names of certain anatomical features, as shown in panel 3. Instead of calling a penis penis, a person suffering from MVPS will feel an uncontrollable urge to replace that word with any of a number of completely unrelated, ambiguous and plain ridiculous words…for a not exhaustive (but already exhausting) list visit the respective entry on Wiktionary. The misconception that saying ‘penis’ would somehow be more embarrassing than saying ‘blue-veined custard chucker’ has caused a sizable portion of the English language’s vocabulary to take on anatomical references as secondary meanings, making it the only language almost totally comprised of dirty words. And then people wonder why some Mexicans refuse to learn it…

Admittedly, using one of the many ambiguous synonyms allows you to retreat onto the ‘harmless’ meaning if you happen to offend anybody with references to sexual organs…but it takes considerable acting talent to get away with things like:

“Oh, no, you misunderstood me…I have a rooster back on my farm in Virginia, and that is nine inches and uncut…”

“No, I was referring to this screwdriver in my pocket…”

“See, what I meant was that Vice-president Cheney is rising…uh…when I look at you…”

As far as Biff’s specific reference here is concerned…well, I’ll never understand why they changed ‘New Amsterdam’ to New York, but kept place names like Weehawken, Hoboken and Hackensack. Why didn’t they think of the children?

On Thursday, action will switch back to Team A in Southpark. Please vote.