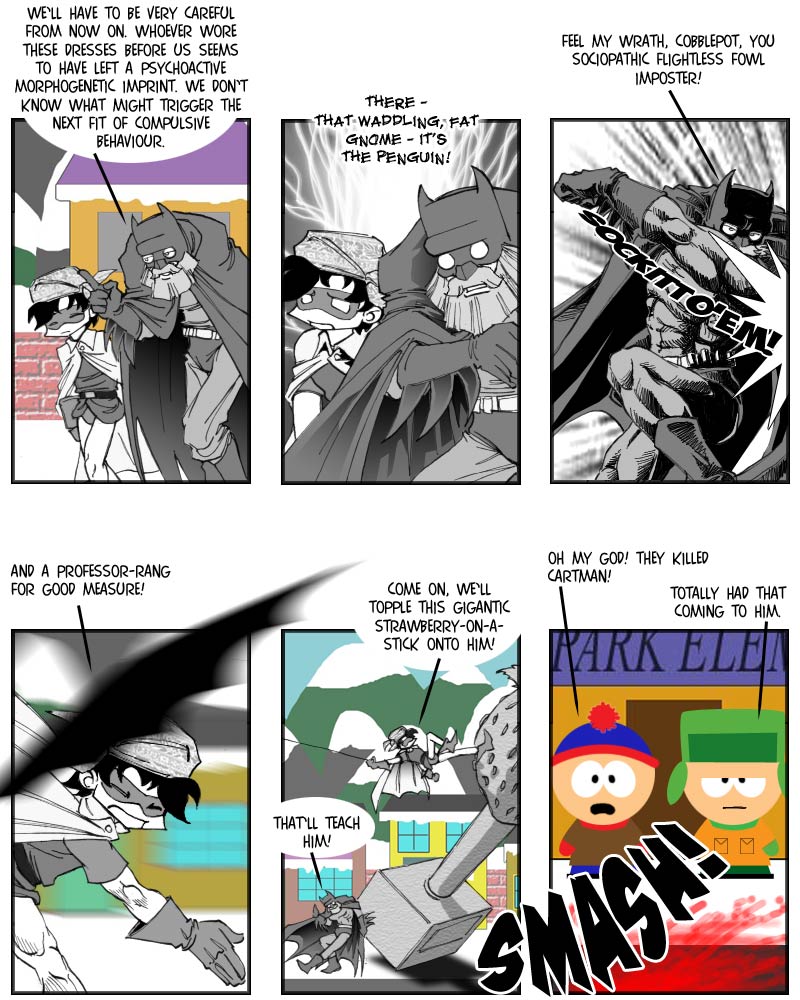 Team A is at it again, opening today’s episode with a nice use of technobabble by the Professor…’morphogenetic imprints’ were put forward as a pseudo-scientific explanation for paranormal phenomena, to that we add ‘psychoactive’, and, presto: B-movie grade explanation for the unexplainable (aka plot-hole). This all is wrapped into the classical ‘we must be careful’ shtick: If characters become aware that something they do is dangerous, but have to keep doing it for the sake of plot, just gloss it over by having one character admonish the others about having to be careful – irrespective of whether there’s anything in the situation you even could in some way be careful about.

Some people seem to wonder how Batman can be a superhero without having any special powers – the answer is simple: His enemies don’t have any special powers, either, plus each one has a crippling weak spot. For example:

The Joker: no special powers, actually just in it for the fun.

The Penguin: no special powers, only uses weaponry that can be concealed in an umbrella.

Catwoman: no special powers, actually just in it for meeting guys. (Same as Robin 😛 )

Two-Face: no special powers, cancels 50% of his crimes before he even starts.

The Riddler: no special powers, pathological habit of tipping off law-enforcement to his plans.

I already mentioned the many giant fixtures of Gotham’s landscape, but this would be the point to add that they were often toppled onto somebody – either by the villains onto Batman and Robin, or vice versa. In the latter case, one or both of our heroes swung into the frame suspended from some (conveniently off-panel) point, and brought the giant something down on the villain’s head, often resulting in some cheap poetic justice: “Holy poetic justice, Batman! He wanted to strike it rich, now he was struck down by (a statue of) John Richenfeller.” (No, not a statue of Richie Rich – no crossovers with Harvey characters.)

And then there’s something that struck me, regarding superhero lingo back in the Golden and Silver Ages – when they did something that, under normal circumstances, would be considered more than enough to ensure the messy demise of some evildoer, they never actually said: ‘That’ll kill him!’ or ‘That’ll pulp his body and spread it all over the center of Gotham. They said: ‘That’ll teach him.’ Now the funny thing is: it never actually did either kill the villain (permanently) or teach him anything…needless cruelty, I say. 😛

In other news, I don’t like Strawberries, and Cartman really had it coming to him. A peek behind the scenes on Monday, please vote!