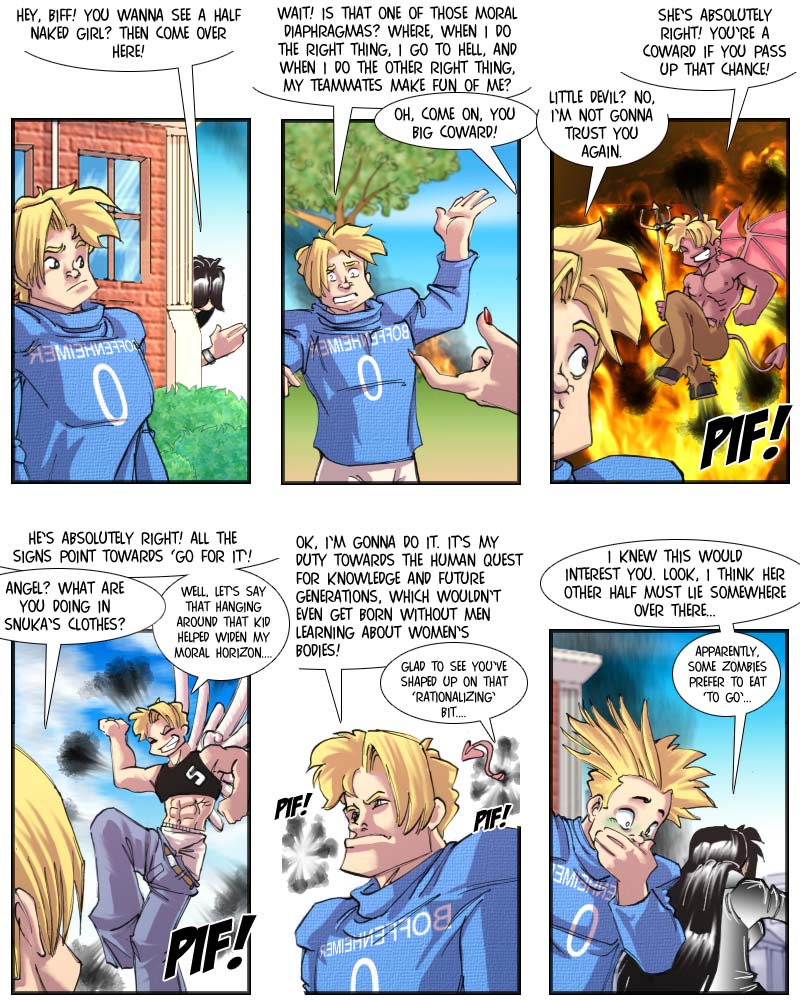 And here we get a rare glimpse at the internal processes – I am loath to use the word ‘thought’ in this special case – of the Biffmaster. As somebody who spent his early youth hooked on comics and TV cartoons…and, actually, his later youth, as well…not to mention he is *still*…ah, anyway. As somebody with a solid foundation in comics and TV cartoons, it is of little wonder that his moral podering takes the form of the classical Li’l Devil/Li’l Angel dichotomy. In the past, Biff’s little moral stumblings were mostly caused by his inability to tell his angel and his devil apart, but off lately another problem has arisen: Biff’s angel has increasingly been influenced by being exposed to Snuka and his masterful rationalizations of ammoral behaviour (and, admittedly, that shirt suits him a lot better than it does Snuka, anyway). Fortunately, this situation turned out to be not quite as morally damaging as was originally to be feared.

Speaking of which, a fun fact: Originally I had planned to have Mopey make good on her panel one claim by just taking off her top, as a kind of fan-service. But then I just couldn’t resist the pun… *takes cover*

Keen observers will note that the writing on Biff’s uniform is mirrored. That’s because he has accidentally put it on inside-out. This is absolutely intentional on my part. It’s always been in the script (the virtual one, which I keep in my head). No way is this unintentional. Or a mistake. And even if it was a mistake – which it isn’t – it wouldn’t have been made by me. But it isn’t a mistake, anyway, it’s intentional. These aren’t the droids you’re looking for. Move on.