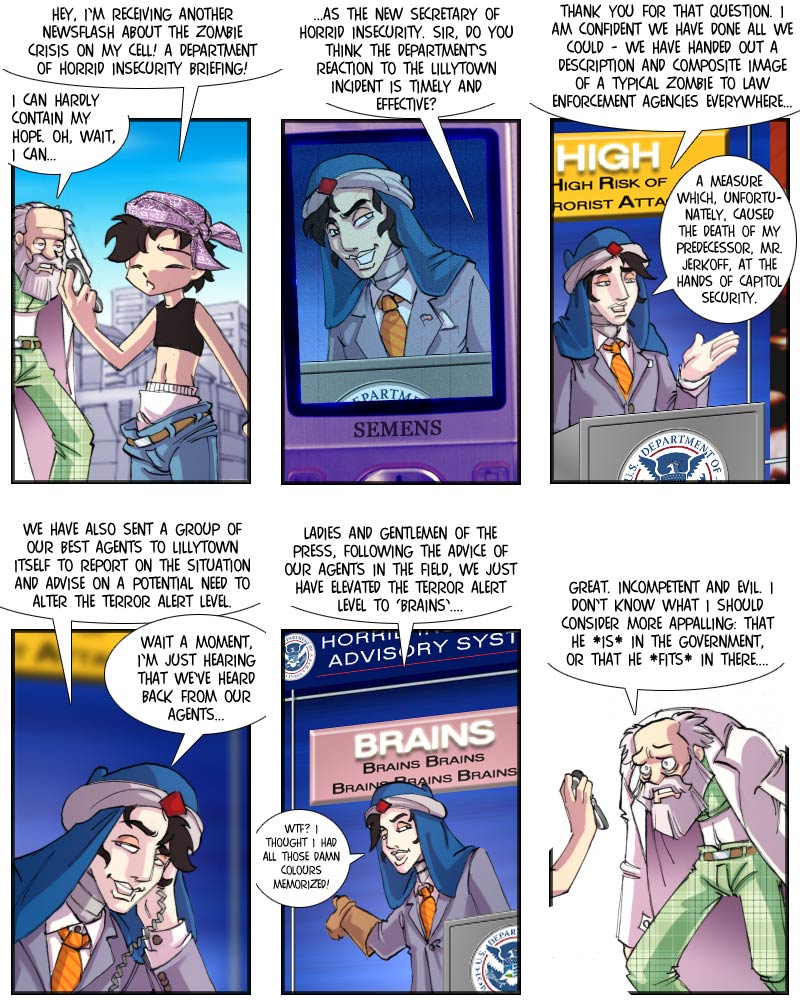 Until further notice, alert level will remain at:

As with the other levels, there are no concrete ramifications, but you can feel somewhat disquieted or thoroughly afraid, depending on your mood and physical distance from Lillytown. Far from thinking they had done enough by having the completely non-alien president give a speech, the government felt they needed to provide more aid to the good people of Lillytown. That kind of aid is a bit vague and virtual, sure, but I bet that when you’re engaged in a desperate struggle against endless masses of vengeful revenants, every bit of ethereal help might do some good. Or not.

Come on, now, let’s hear it for today’s guest villain, Mr. M.! You all know him from a certain Arabian fairy tale, as well as his very successful series of exercise videos. He was very kind in filling the guest spot at very short notice. (Originally I did really plan to base the DHS secretary character on the real-life DHS secretary – but he just *does* look too much like a zombie, himself.)

As far as the first panel goes, that’s something that really shows how far out of the loop I am – the last time there was a TV announcement in this plot (the president’s speech), I still used one of those randomly (but conveniently) placed public broadcast screens for it. You know, that kind that’s never around in real life, but was very common in fictional settings, whenever the protagonists had any need to receive any kind of message through TV. Alternately, a TV shop would do, even if it was something of a stretch that those always kept the sets in the window running, no matter what kind of cataclysm was currently engulfing the community. Only a while after I did that episode did I realize that all that has become completely superfluous in the age of mobile phones with internet access and multimedia capacities…

There also is a new voting incentive for today, and – more on Thursday.