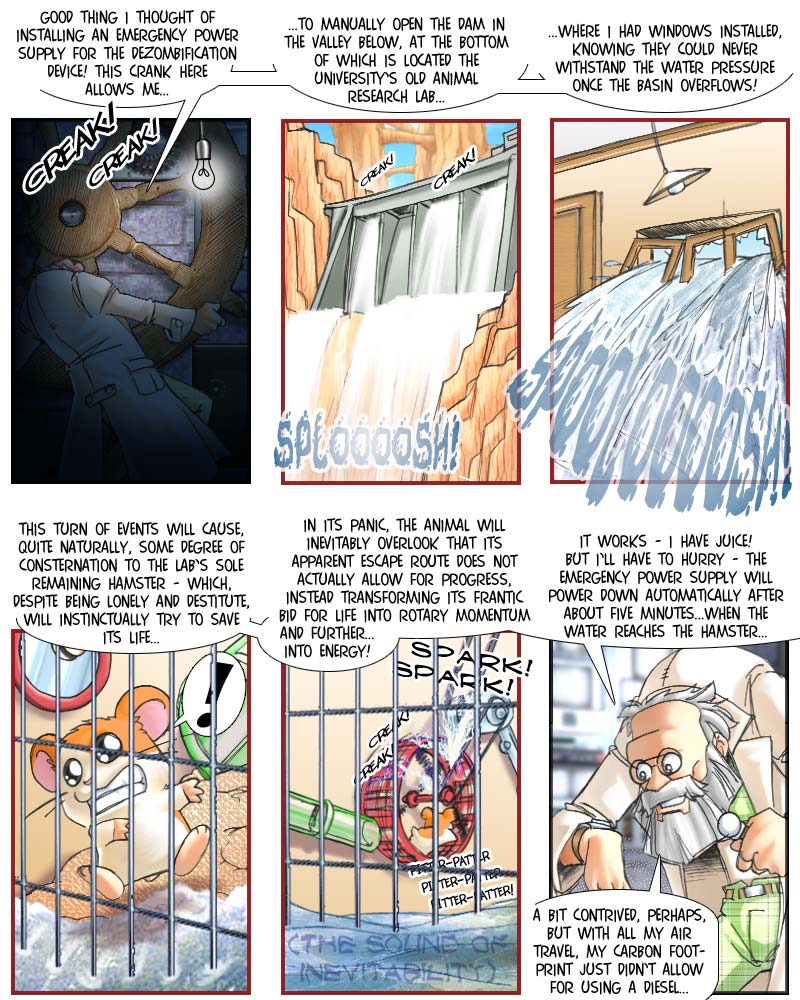 So now you know how hydro-electric power is really produced. Many people think the water’s power is transformed into electic energy via turbines – but that’s silly! Turbines would have to be made from metal, so they’d rust when exposed to water! That’s why hamster wheels are used for the transformation – they’re from plastic, so they don’t rust. Plus, they’re available in happy and cheerful colours, whereas turbines are usually very dull and drab.

The use of hamsters is also what makes hydro-electric power “renewable” – that’s why the Professor had to make sure there was only a single hamster left. If there had been a pair, they’d have “renewed” so frantically that it would have been the hamsters flooding the reservoir, instead of the other way round.

By the way, “geo-thermal” power is produced very similarly – just, instead of water, you use molten lava to motivate the hamsters. It has a higher degree of efficiency, since the lava gets the hamsters a lot more panicked than mere water, but unfortunately, it’s not totally carbondioxide neutral. There’s a small carbon footprint connected with it, which smells of crispy hamster.

In any case, the Professor was proven right in his insistence of having an emergency power system installed – it was quite a fight to get it, since some people claimed he didn’t need to have a giant crank installed in his lab, because he already is…but nevermind. There was no question, however, that the emergency power supply would have to involve the nearby dam in some way. See, there are certain requirements regarding the minimum awesomeness/impressiveness any kind of power supply for a B-movie lab must possess – and a simple diesel would never cut it, unless it’s super-tanker sized. A classic is directly harnessing the uncontrollable power of lightning, although other kinds of uncontrollable power work as well. Dams qualify, since they can supply some pretty neat aestethics, if shot from the right angle. Nuclear power is also an option, since the average audience accepts any random device as a nuclear reactor, as long as it glows ominously enough*. Solar power is only acceptable for space-based laboratories, where you can see the solar panels unfold majestically against the backdrop of infinite space, accompanied by a soaring orchestral music. Terrestrial solar panels are right out, as is windpower – sheep grazing serenly at the foot of languidly turning windmills make for a scene that cannot be readily intercut with scenes of frantic dabbling in things humanity should never have known.

And there was another reason to use the dam for the emergency power system – by enabling the Professor to flood the animal research lab, it doubled as a biohazard control system! Well, at least it would have worked for most of the animals the Professor was experimenting on, save for the tigers. Those had gills. ._.

* Naturally, that requires the reactor to be in some unreasonably visible and accessible place – see “Dr. No”, for example, where the epynomous villain had his reactor installed, without any shielding, right in the middle of his control room. James Bond could just have waited for cancer to finish No off – instead of that, he had to blow up the whole island and irradiate most of the Carribean in the process, oblivious to the fact that that easily qualified as a whole different class of disaster, compared to Dr. No’s childish interference with a rocket launch or two…I guess “007” must have been a reference to his IQ. >_>