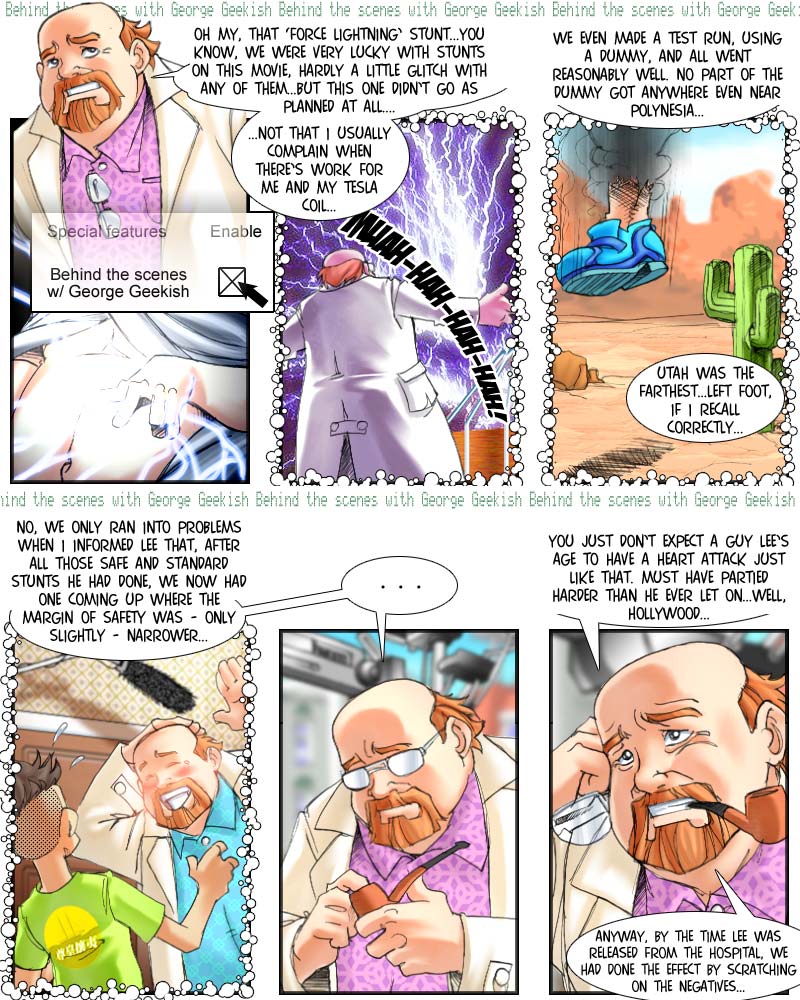 Obviously, this strip was supposed to directly follow this one, but I misnumbered the file. ^_^; But I just couldn’t bring myself to toss it, after discovering my mistake – after all, how many opportunities does George ever get to employ his beloved Tesla coil?*

And after all, it’s also an important milestone for Lee – only the second time he got out of doing a stunt…not that it would have kept him out of the hospital, but nevertheless. At least he was taken to the hospital in an ambulance, a 20 minute drive, rather than being brought back from some Pacific Island via helicopter (many hours) or outrigger-canoe (several days).

And there’s another boon in it, for Lee: his growing reputation as a party animal around Hollywood. It’s entirely unfounded, but it’s a better reputation to have than those of an underpaid, overinjured, underappreciated, overhumiliated stuntslave. He might be the hardest-working guy on that production, but he wouldn’t want outsiders to know – he still holds out a faint hope he might one day get offered a less soul-sucking contract from some other studio.

And the whole episode proved that George isn’t a bad guy, after all – he did enjoy zapping that dummy just as much as he would have enjoyed zapping Lee. It’s really not about inflicting pain for him, it’s just about doing the sparkly effects. *_* In the end he had to fall back onto a classic, of course: Lightning effect by scratching on the negative is one of the oldest ones in the book, and done well doesn’t even look half bad for its age. But he has also learned a valuable lesson – from now on, Lee will not be informed that he is supposed to perform a stunt until he’s already right in the middle of it.