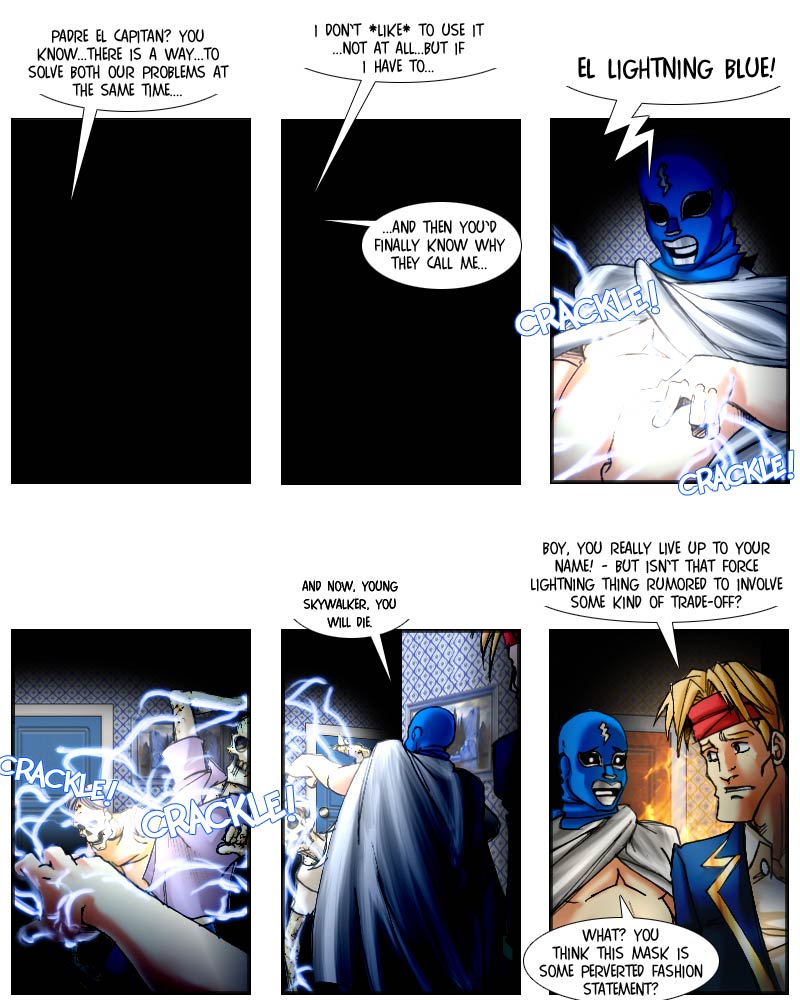 Many people thought El Lightning Blue had adopted his moniker only to honor one of the grand, ol traditions of lucha libre – the old tradition of ripping off the name of a more famous wrestler that went before you, specifically. But, no, there’s a real meaning behind it – as is the case for only a very few other wrestlers: El Santo was really a saint, Blue Demon was really…blue, and Hulk Hogan is really just Paul Hogan wearing a mask and playing a long-running prank on the American public.

But, of course, El Lightning Blue has to pay a terrible price for his power – after all, this is by far the most powerful of all the Jedi powers: you’d have to pay 50 bucks or more to get a tazer that can do the same without decades of study and three meditations a day. Still, not bad for a force power – sure beats force grip: a technique that saves you the effort of having to take a couple of steps across the room when you want to strangle somebody. Anyway, the price for the force lightning is terrible facial disfigurement – although it’s not quite as bad in his case as it was with the Emperor. There’s one area where our world is far ahead of the Star Wars universe: medicine. We have things like cosmetic surgery and, more importantly, abortion – the whole fall of the Jedi order could have been avoided if they had had abortions on Coruscant. But I disgress…

Though, really, I had planned this all along, this isn’t some sort of an ass-pull. Not only did I give him that name for a reason, I also gave lots of subtle hints about his super power, basically ever since his introduction. For example, you’ve noticed the fact that we’ve never seen El Lightning Blue swim? See, that’s because of the electricity. And have you noted that he’s slightly overweight? Well, how could he have become world champion in that shape, without some special trick up his sleeve?* And that little lightning bolt on his mask? That wasn’t because of his name, that was because of his power! Really. Could this eyes lie? *looks as if he wasn’t lying*

*Because the booking committee said so? **